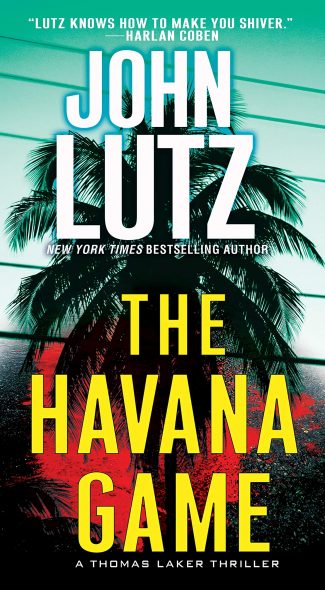 In John Lutz’s The Havana Game, the covert Gray Outfit sends John Laker to untangle a mess when the U.S. is seemingly linked to a terrorist bombing in a Baltic nation and a Russian troop buildup just over the border. But after a second attack leaves him out in the cold, Laker’s on his own.

John Lutz’s first Thomas Laker Thriller, The Honorable Traitors, was published in January 2018. How is it that a year later, the plot of The Havana Game deserves the accolade ripped from the headlines? Does Lutz have a mole inside the National Security Agency (NSA) of the caliber of Deep Throat? Thomas Laker and Ava North both work for the NSA although Laker reports directly to Samuel Mason, who heads up “the covert Gray Outfit,” so underground it’s off the books.

Ava, Thomas’s girlfriend, is with him when he gets a text from his boss: “‘My office Mon 0730. Bring your toothbrush.’” Translation: it’s wings up for Thomas who’ll “be going directly from the briefing to the airport.” Their two months of togetherness in Washington, DC, are about to end. Ava has a cryptic warning for Laker and given that she’s a cryptographer at the National Security Agency and she’s part of the powerful politically-connected North clan, it behooves him to listen carefully. Besides, she does crosswords in ink, in French, with nary a dictionary in sight.

She said, “Laker, wherever they send you, whatever the job is, look for a bear under the bed.”

He returned to the sofa and stood looking down at her. “I love it when you go all cryptic and portentous.”

“I shouldn’t be saying anything at all. I’ve been reminded many times that at the NSA, committees issue cautious, well-supported recommendations. Individuals keep their opinions in the building.”

“But your opinion is?”

“The Russians are planning something big.”

Let’s back up. The Havana Game opens with an astonishingly low-tech display of spy craft.

Don’t look at anybody.

His trainers had told him that. All of them. He’d been trained by both sides in this war, and considering they were enemies, it was funny how similar the training was. Especially the dictum When you’re operational, don’t look at anybody.

What’s a body to do when a pacifier rolls beside your foot and the baby’s mother doesn’t notice but the other passengers do? No spy wants to make eye contact with someone: “The danger was that they would look back.” There’s something off about the statement: “he’d been trained by both sides.” The operative reaches his stop on the edge of “the ancient edge of the city,” where “spires and domes looked black against the dark-gray sky,” and presses a detonator. It doesn’t end well. Mason fills in Laker.

As usual, he skipped the small talk. “You heard what happened yesterday in Tallinn, Estonia?”

“A streetcar platform was bombed. Fifty-two killed, at last count, and more than twice that number injured. Last I heard, no claim of responsibility.”

“Death toll is up to fifty-four now. Still no claim.”

“Unusual. If it was ISIS or some other Mideast terrorist organization, they’d be boasting about it.”

Laker shares Ava’s warning to “look for a bear under the bed,” and outlines how Russia regards Estonia. It’s chilling.

Laker said, “Moscow’s in an expansionist mood these days. They’d like Estonia back.”

“And the rest of the Baltic republics.”

The approach Russia uses in Crimea and Ukraine won’t work in Estonia because it’s a member of NATO where “an attack on one NATO member is an attack on all.” Laker’s assignment: go to Estonia and exercise his “finesse. Judgment. Not single-handed heroics.” Mason tells Laker his Beretta stays on U.S. soil. The civilized investigation blows up in Laker’s face—it “seems” an American soldier is responsible for the terrorist explosion. Laker doesn’t buy that scenario, “but after a second attack leaves him out in the cold,” he goes underground, determined to follow the meager dots no matter where they lead.

“When the cat’s away, the mice will play,” sums up Ava’s life in Laker’s absence. A fellow NSA agent is murdered: “when tracks lead to a Cuban-American billionaire in bed with the Jersey Mob, Ava’s superiors want her to lay off.” Will she? No, she resigns on the spot. That makes two NSA agents gone rogue. How will it end? Are their stories connected? The answer might have been stranger than fiction a few years back, but it screams of realpolitik today. The Havana Game is a tour de force, utterly unputdownable.