January 25, 2021
Melanie Finn's The Hare is a powerful story of female perseverance, resilience, and personal transformation under the pin of the male gaze. 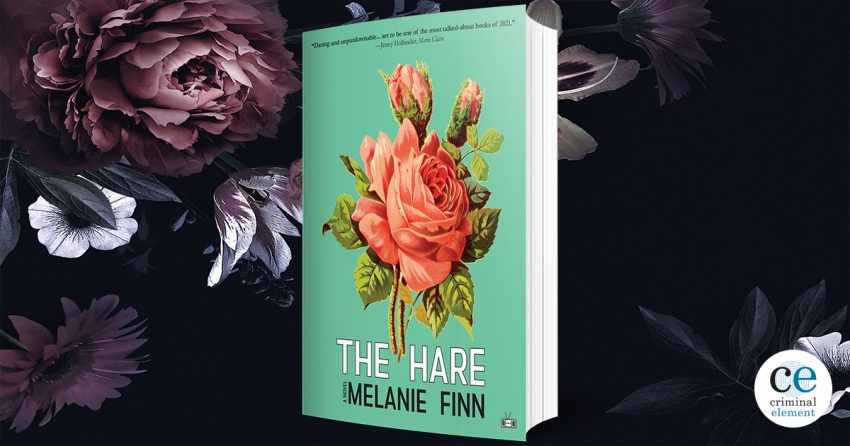 I had a lot of feelings about Melanie Finn’s The Hare, which grew and morphed along with the heroine, Rosie Munroe, as the book progressed. Rosie is an orphan, raised in the lodging house her strict, emotionally-distant grandmother runs in Lowell, Massachusetts. Desperate to leave 1980s small-town life behind, she defies her grandmother to win an art scholarship to the Parsons School of Design. Life in New York City isn’t exactly what she expected: she envies the boldness of the artists around her even as she finds it difficult to make friends. So she’s alone at the Museum of Modern Art one morning when a man two decades her senior approaches her.

Bennet Kinney is charming and cosmopolitan, and soon she’s swept up into his glamorous life. Abandoning school in order to live with him in a friend’s Connecticut boathouse, she tries to absorb his many lessons on how to be a certain sort of moneyed, connected white Anglo-Saxon Protestant. Getting pregnant isn’t part of the plan, but Bennet proves a doting father to little Miranda… at least until he abruptly whisks Rosie and Miranda away to an abandoned farmhouse in Vermont, a cloud of sirens fading away behind them.

Rosie is not ready for the hardships of rural life, and neither, it seems, is Bennet, who claims to have a job teaching at a nearby university that requires a long commute. Fortunately, their neighbor Billy Mix takes pity on her, teaching her how to work the woodstove for heating and cooking, and eventually teaching her how to hunt and forage, skills that will become increasingly important as Bennet starts taking longer and longer absences from home. When the latest of his schemes blows up in his face, Rosie is forced to learn how to fend for her daughter and herself without him. But Bennet’s criminal life is unwilling to leave her alone.

Following Rosie’s story through the decades, The Hare is a critical examination of one woman’s struggle not only to survive but also to rear her daughter in such a way as to protect her from the same hardships Rosie herself has undergone. In many ways, Rosie is a turn-of-the-21st-century white American Everywoman: seduced by a dream of riches before being confronted by grinding poverty and a near-complete lack of social net, while criminals and con artists wait to prey on her. The feminism she displays as she ages, like her stubborn independence, is hard-earned:

The blood genuinely surprised Rose, as if she’d forgotten her own blood. It had been years since she’d menstruated.

Perhaps, she mused, this was why men are so careless–they are not reminded, monthly, of the frailty of the human form.

They are not reminded, every day in magazines, on TV, on the internet, of their aging and their defects — cellulite, small breasts, floppy breasts, stretch marks, wrinkles. Men are not oppressed by the clocks of their bodies, decisions that must be made by a certain time[.]

But women are trapped by form, by time — when they begin to menstruate, when they stop, and all the individual months in between that mark the ascendency of their fertility and its decline and its stuttering failure, culminating in the sweaty self-immolation of menopause.

As with any shell born of adversity, this biological determinism can make Rosie harder than she needs to be, as Melanie Finn deftly points out in chapters where Rosie is interacting with a trans woman. The things Rosie has had to do to survive have not made it easier for her to be kinder or more flexible, but even her relatively narrow world view cannot limit her capacity for the empathy that is (or at least should be) at the heart of feminism.

Another throughline of hope in the narrative is the focus on art. Art is Rosie’s first love, abandoned in New York with her mentor Ida as Rosie immerses herself first in Bennet’s life of idleness and then in a hand-to-mouth existence where her only artistic respite comes from observation. Art serves almost as a metaphor for the ego Rosie is forced to leave behind as she journeys from naive loner to fierce, if still lonely, independent:

Art couldn’t help but glorify, art was a singular trajectory from the glory of religion to the glory of the self. Although Ida had said art needs to be about something other than the self — it paradoxically required an enormous ego and self-interest to imagine and execute provocative work. Even Ida’s bloody, muscular canvases glorified the struggle of men and meat and blood in the Tribeca warehouses — sanctified it, for as Rosie considered the life of those men, and the death of the animals, they were without glory, they were mired in dirt and excrement and offal, the terrified animals skidding in their own blood. The grubbiness of the reality was absent from the art.

Fortunately for us readers, prose is a medium that can showcase squalor without sanctifying, as Ms. Finn so searingly does here in this suspenseful examination of a life overshadowed by arguably necessary crimes. It can be hard to root for Rosie at times, but there’s no denying that her interior life is a realistic portrayal of a certain kind of American womanhood that is both familiar and frustrating. By the end, however, I was one hundred percent on her side, in large part due to the fact that she had also come around to finally putting herself first.