March 2, 2022
In The Hanged Man's Tale, police inspector Paul Mazarelle must track a serial killer through the shadowy alleys and opulent homes of Paris. 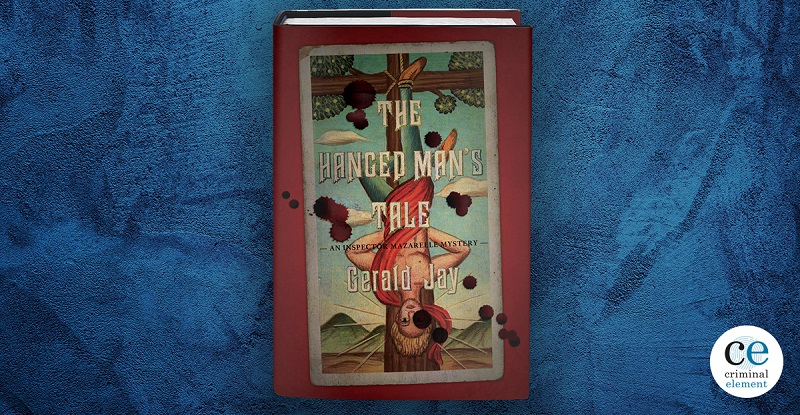 Commandant Paul Mazarelle is coming off a huge professional triumph (The Paris Directive) when his new boss assigns him to Bastille Day parade duty. Bastille Day, celebrated on July 14th, is a major holiday and never more so than in 2002 when the theme was Franco-American friendship. The destruction of New York’s Twin Towers is top of mind for participants and observers alike.

In spite of all the frills, parade duty was no one’s idea of a good time. For Mazarelle, it was a not-so-subtle hint. He might be a commandant in the elite Brigade Criminelle, but his new boss was reminding him that, whatever famous success he’d had in the Dordogne, he wasn’t above crowd control in Paris. Four decades after Maigret, no one liked a celebrity detective.

A dead body is discovered in a Parisian canal and the corpse is positioned in a unique way. Coudert, Mazarelle’s boss, fills him in, eschewing chit chat although he does praise the team’s efforts at the Bastille Parade where the president was targeted.

“Thanks.” He wasn’t expecting that. “Anything else?”

“Yes. A new case. A hanger . . . A body found one hour ago in one of the tunnels on the Canal Saint-Martin.”

“On no, this is murder. He was hanging upside down.”

He took in Mazarelle’s expression, and nodded.

“Mais oui, it’s strange. And the press is on it already. The mayor has been calling. It’s upsetting tourists. First the attack on the president, then this. It looks political. It’s bad for the city, and bad for everyone.”

Coudert needs Mazarelle’s special ability to solve aberrant cases. If only Mazarelle would turn his focus on the case at hand. Coudert does not want Mazarelle distracted by a rumored Internal Affairs investigation into a few of Paris’s commissariats. Red flags and bulls come to mind.

Mazarelle is unhappy to discover that the hanged man’s body was cut down before he and his colleague Maurice arrived on the scene. Fabriani, head of station, gave the go ahead. Mazarelle blocks out everything to focus on learning as much as possible from the body. The dead man is the private investigator Alain Berthaud. His wallet was stuffed with cash so robbery was not the motive. Mazarelle didn’t acquire the sobriquet the “Swiss Army knife of detectives” by letting the Police Scientifique technicians do all the examining. He’s a hands-on cop.

And sure enough, tucked inside the breast pocket of his jacket, Mazarelle found a small card they’d overlooked. A card bearing the inverted imagine of a dead man—the Hanged Man from a tarot deck. Strange, Mazarelle thought. Fumbling a glassine envelope out of his back pocket, he picked the card up by the edges, and placed it inside.

After the discovery, he visits Luc Fournel, Berthaud’s business partner, to give him the sad news and find out his whereabouts the night before. Did the agency have any unhappy clients? Fournel mentions a wife with a connected husband, Babo, who is part of a “Gypsy mob.” The Roma and fortune tellers come to mind when one thinks of tarot cards. Mazarelle’s acupuncturist Angelique Vasseure is a terrific resource and she directs him to the fortune teller Madame Mireille. Mazarelle asks her the significance of the Hanged Man card.

“This card”—she tapped it again—“is a key to the Major Arcana. Card twelve. One of the most mysterious in the entire tarot deck. It’s simple, though subtly complex. It attracts, but simultaneously repels. And in countless ways, yes, it contradicts itself.”

It’s a paradox. Mazarelle goes deeper—is the card an omen? What does it portend for a person’s future? She says the card spells danger: “The danger, monsieur le commandant, is for you. Grave danger.”

He asks her where he might find a Gypsy named Babo and she suggests the Petite Ceinture. Mazarelle finds and arrests Babo which pleases his superiors. As far as they’re concerned, it’s done and dusted. It seems all too convenient to Mazarelle, smacking of round up the usual suspects. The Roma had always been singled out and blamed for the misdoings of others and Babo protests his arrest mightily.

So Mazarelle keeps on digging. He meets Claire Girard, an intelligent, incredibly stylish journalist whose stories straddle the grey zone between hard news and tabloid exposés. They make an immediate personal connection.

Mazarelle is fixated on the tarot card and when he discovers there’s more than one interpretation, he presents his theory to Coudert.

Mazarelle told the patron that some experts had suggested more than one meaning to the card. Others believed that the grim image of a body dangling upside down was clearly meant as a warning: “You rat us out, fink, and you’re next.”

Coudert, suddenly and without warning, seemed to become very unhappy. “Look Mazarelle, where the hell are you going with this warning of yours? Who’s being warned? About what? Is this something political?”

Mazarelle’s patron is sorely mistaken if he thinks his disapproval will shut down the investigation. There’s more: white supremacists on steroids who hate immigrants and the Roma. Evidence that points to well-buried corrupt cops who are on the take. The Hangman’s Tale is complicated and twisted, like Mazarelle. The commandant embraces life with all guns blazing: he’s a gourmand with a zest for life. For all his appreciation of delicious meals and delightful women, he’s totally focused on unearthing the truth. Nothing stands in his way, not even an attempt to make him take the fall for the increasing body count. Enjoy this cinematic tour de force!