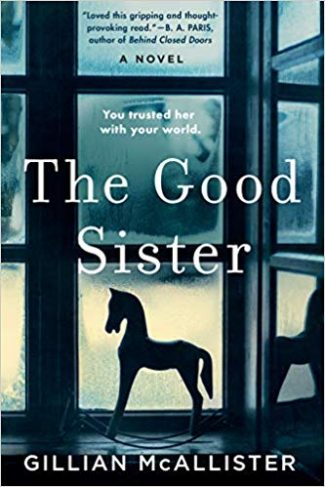 The Good Sister by Gillian McAllister is a novel about the unyielding bond between two sisters, which is severely tested when one of them is accused of the worst imaginable crime.

Martha and Becky Blackwood are sisters who aren’t just close due to their family bond but are actually friends despite being quite different people. Humanitarian Martha was formerly a school teacher who was so moved by the plight of Syrian refugees in Greece that she decided to form a charity to help educate the refugee children and give them a safe place to go outside of the camps they were forced to call home. She’s married to staid IT developer Scott, and the two lead a perfectly respectable, perfectly conventional life that, only a little while ago, they believed meant having a baby as the next logical step.

Free spirit Becky is a set designer who hates her job, but still loves the ex-husband she split up with after nine years of marriage. At nineteen, she had gotten pregnant with their son, Xander, and fully embraced her soon-to-be husband’s blue-collar existence. Marc made her happy and that was all that counted, but struggles with subsequent infertility and a growing distance between them would eventually end their marriage, albeit on the most amicable terms possible. In fact, Marc would be the person she’d most often lean on after discovering that her impulsive choice to quit her job and nanny for Martha instead was one of the worst decisions of her life.

The problem is that Layla, Martha’s newborn, is a nightmare. She cries all the time, seemingly from reflux. The Blackwood sisters and their families do everything they can to soothe her, but only time will help poor Layla grow out of her constant crying if the medical professionals are to be believed. One weekend, Martha needs to fly to Greece to sign a lease. Scott has a developer’s conference that should only keep him away for a night, but he texts Becky to see if she’ll look after Layla for one more evening so he can stay a little longer.

Then the worst happens—Layla dies.

The Good Sister is most impressive, however, in its critique of a society that judges women for not being perfect mothers.

At first, everyone assumes it was crib death, but an autopsy shows that Layla was asphyxiated. Becky is arrested, despite her protestations of innocence, as all the evidence points to her. Martha, still grieving the loss of her daughter, can hardly believe that her beloved sister could possibly be responsible. She knows Becky as loving and good-hearted, but she also knows that her little sister can be rash and probably drinks more than is wise. Sitting in the courtroom, watching Becky on trial, Martha veers between conviction in her sister’s innocence and doubt in the face of compelling evidence:

The rest of the time, the jury is out, in my mind. She’s nothing. Neither innocent nor guilty. Play is suspended until I know. I have always been able to do this, to reserve judgment. To see things from all sides. Becky was useless at it—said I was a pushover—but it always came naturally to me. I never experienced staffroom politics or clashes with the head teacher. I could always understand why people did the things they did. “People are complicated,” I once said to Becky, to which she replied, “People are dickheads.”

There are many twists in this multi-layered mystery told through many differing viewpoints that Gillian McAllister showcases deftly as her courtroom drama unfolds. The Good Sister is most impressive, however, in its critique of a society that judges women for not being perfect mothers. Martha is judged for leaving her child in order to work, whereas Becky is judged for pretty much the entirety of her life choices. As the defendant, her life is examined in microscopic detail, such that seemingly innocent conversations and incidents take on a much more sinister cast in the face of Layla’s death.

As a mom who often struggles to successfully juggle the demands of daily life myself, I felt the hurt of every single one of the indignities Becky has to bear. The worst, to me, was when a skepticism arose regarding Becky’s innocence in the case of Layla’s death, leading to the belief that she was no longer capable of parenting her own child either. Mothers living in the kind of societies that expect women to be able to do it all and judge you if you can’t or don’t will absolutely relate to this novel.

This book is also scathing in one very obvious blind spot of such societies, as a depressed Martha notes in court one day:

I start to count the faces in the room to distract myself. There are only women in this case. Me. My sister. My daughter. Two female barristers. The almost all-female jury. The witnesses. All women, so far. Mothers, daughters, friends. This tiny world seems to revolve around us. It discards the men. They are not expected to look after their children, and they are not blamed when they don’t.

The Good Sister is a novel that is well aware of the injustices of motherhood, framed in a tragedy that plays out through the British judicial system. More importantly, it looks at how we can do better, through honesty and love and forgiveness, to provide care for all members of society. If this book inspires even one person to be less critical of the parenting abilities of their neighbors, if it inspires people to help instead of harm, then it will have made the world a better place—a grand but achievable ambition for this deeply humane murder mystery.

See More: Review of Those People by Louise Candlish