Book Review: The Golden Tresses Of The Dead by Alan Bradley 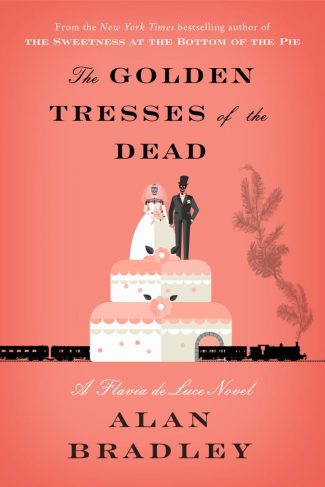 The Golden Tresses of the Dead

In Alan Bradley’s The Golden Tresses Of the Dead, a finger in a wedding cake is only the beginning in this deliciously shocking mystery.

In the tenth installment of Alan Bradley’s utterly charming Flavia de Luce mystery series, our intrepid young heroine must put up with the hurly-burly surrounding her oldest sister’s impending wedding. Flavia comforts herself with the thought that the end result will be Feely leaving their ancestral home for good, never mind the niggling feeling that perhaps Flavia isn’t completely overjoyed to have her overbearing sister out of her hair finally. Festivities, alas, are abruptly curtailed when Feely cuts open her wedding cake to find a severed finger inside.

Flavia immediately spirits away the digit in order to ascertain its origins, with the help of loyal family servant Dogger, who is also her business partner in their recently opened inquiry agency, Arthur W. Dogger & Associates — Flavia’s involvement not being advertised, given that she’s a thirteen-year-old girl in 1950s England. The duo are soon absorbed by the questions of who the finger could possibly belong to and how it had ended up in Feely’s cake.

This investigation is interrupted, however, by the arrival of their very first paying client, a Mrs. Anastasia Prill. Her father, Dr. Augustus Brocken, was the homeopathic practitioner famed for his namesake Balsamic Electuary, a cure-all product that established his family’s fortune. Elderly now, he spends his days in care at the expensive and very private Gollingford Abbey. Recently, several letters regarding his medical practice have disappeared from Mrs. Prill’s home. She wants to hire Dogger and Flavia to recover these letters as discreetly as possible.

It doesn’t take our sleuths long to deduce that Mrs. Prill is hiding secrets of her own and that duplicity seems to be part of the family tradition. But could her family’s machinations have anything to do with the severed finger, or with the missionaries who are passing through town with mysterious cargo? Flavia throws herself into investigating with her usual zeal, in large part to avoid thinking about her changing family dynamics.

As always, Flavia and her winning personality are the high points of the novel. Having been an inquisitive youngster once myself, I found her fascinations with a variety of subjects eminently relatable, from the origins of language to the morbidity of decomposition:

I didn’t bother mentioning also that I love it when someone uses the word interment. It comes from the Old French word enterer, which means the act of placing into the earth; of burying. It’s a comfortable word, all in all, since it conveys precisely the general idea of what’s taking place without actually raising images of the worms and slugs and squishiness, et cetera. Personally, I delight in deliquescence, although I am aware that not everyone shares my enthusiasms.

The idea of human hearts and brains turning to cheese is not everyone’s cup of tea.

Alan Bradley masterfully channels the interior life of an extremely intelligent young girl growing up under eccentric circumstances as she grapples with her burgeoning emotional maturity. I especially enjoyed Flavia’s interactions with her younger cousin, Undine, who is starting to feel a need to prove herself to the rest of the family. But it isn’t just Flavia and her family who benefit from Mr. Bradley’s keen eye for characterization. Supporting characters are sketched out with humor and deftness, as here with a parishioner at St. Tancred’s, the church where Feely was married:

She was the insinuating voice on the telephone when the coffers of the Church were running empty. In The Canterbury Tales (which [Flavia’s other sister] Daffy insisted was cribbed from Publius Papinius Statius, a Roman poet of the first century A.D.), Chaucer speaks of “the smyler with the knyfe under the cloke” and surely, according to Daffy, he had Clary Truelove in mind, or someone very like her. Miss Truelove was the dagger behind the cloak of kindness with which [the vicar’s wife] Cynthia Richardson met all comers, and, when occasion demanded, the truncheon of the Church, so to speak.

The Golden Tresses Of The Dead is as delightful a caper as any tale of severed fingers and purloined letters could possibly be. Along with strong character studies and the fascinating chemistry lessons that are a hallmark of the series, this volume also included quite a bit of information on the London Necropolis Railway and other assorted trivia. It’s always fun to feel like I’ve learned something while solving crimes with our winning heroine, and I can’t wait to read more!

Read for more on the Flavia de Luce series!