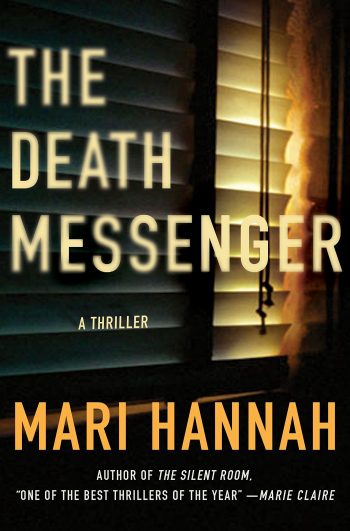 Track a stalker. Catch a killer. The Death Messenger is a tense police procedural following The Silent Room in the thrilling Matthew Ryan series by Mari Hannah.

In the Acknowledgements section at the end of the novel, author Mari Hannah indicates that the two lead protagonists in The Death Messenger — Matthew Ryan and Eloise O’Neill — began life on opposite sides of a disciplinary hearing in her stand-alone novel, The Silent Room.  Funny how that stand-alone has grown into a new series!

When an author enjoys writing and spending time with their characters, it is hard to let them go.  It’s the readers who benefit from this decision by Mari Hannah to continue telling Ryan and O’Neill’s stories in her tense and sometimes jaw-dropping new novel.  In this work, Eloise O’Neill is put in charge of a Special Ops Unit where she is given carte blanche to hire whoever she needs to be successful.  She realizes this is a sink or swim situation where success could set up her career to skyrocket forward and failure could see her forever languishing in a desk job.

The first thing O’Neill does is approach Matthew Ryan about joining her team.  He jumps at the chance, not only because he respects and fears O’Neill, but also because he is intrigued by their assignment.  There is a disturbing DVD sent to the police that appears to be detailing the staking and eventual killing of the subject of the video.  Internally, they nickname the criminal filmmaker ‘Spielberg’ because of the interesting camera work.  There is no way they will be able to catch the person behind the DVD until they get another one and somehow discern a pattern.

The Death Messenger grips you by the throat and never lets go.

I really enjoy Mari Hannah’s writing as she often sprinkles her dialogue with bits of pop culture.  When O’Neill calls Ryan and finds him in a bar, he indicates that he’s ‘a Rebus fan’ (nice shout-out to Scottish author Ian Rankin).  This series is similar to the Rebus novels as it is set in an area where there is a lot of history, and citizens who all seem to have secrets.

O’Neill decides to expand her team and brings on the recently retired ex-Detective Grace Ellis and her husband, Frank. They are both somewhat outspoken and rough around the edges, but they know how to dig their claws into a case and attack from every direction.  After a brief bump in the road where none of the team feels they can trust the others, they eventually bond and set their sights on the killer nicknamed Spielberg, who continues to send in DVDs containing their victims’ demise.

They call their converted apartment a ‘silent room’, which is another term for a covert operation.  It is here at this base where they wait for Spielberg, or ‘the death messenger’, to call and taunt them, as has become the pattern.  All they know is that Spielberg is a female and has targeted some high profile people for her snuff films.  Ryan seems to have made some connection with Spielberg on successive phone calls — but will it be enough to either find her location or motive? The trouble is, the closer he gets, the nearer he comes to becoming the next victim.

The Death Messenger grips you by the throat and never lets go.  Mari Hannah is a great writer and a name readers of crime/thriller fiction need to look out for.  This novel keeps you guessing the entire time and the ending will definitely surprise you.