December 14, 2020
In the latest Shana Merchant novel from Tessa Wegert, Shana must face her troubled past when a murder case drives her to the most dangerous place of all—home. 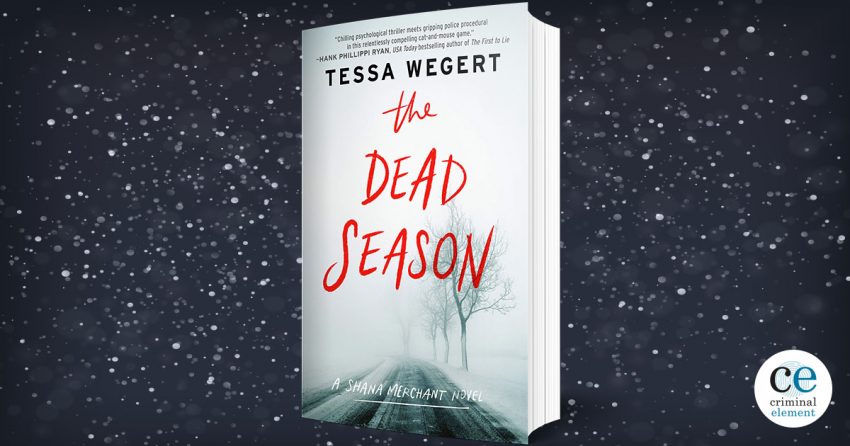 How are things going for Shana Merchant since she solved a “closed-door” mystery at an imposing mansion on one of the Thousand Islands (Death in the Family)? Not so great. She still hasn’t been cleared to return to work. In the aftermath of an unauthorized shooting in the waning hours of her last case, she must pass a psychological profile before rejoining the Alexandria Bay police department. Shana is also actively avoiding her colleague Tim Wellington. Shana’s engagement falls apart after Death in the Family so her friend and mentor, Maureen “Mac” McIntyre offers her a couch to surf on. Mac is first-ever female sheriff in the history of New York State, sealing her status as a legend. Shana’s martial arts classes are about the only bright light in her life. Winter is coming to Alexandria Bay, NY, as evidenced by the cold winds whipping off Lake Ontario. Tessa Wegert’s descriptions of the mighty St. Lawrence, as seen through Shana’s eyes, are luminous.

I never fully understood the magnetic draw of natural beauty until I started calling the North Country home. Even desolate and cold, the river put me in a state of awe. With no other boats around to disturb its numinous splendor, the surface of the water was a lustrous, level plane.

Shana walks for hours along the deserted bank of the St. Lawrence River, steeling herself to face the memories of her kidnap and torture at the hands of Blake Bram. Although she escaped, the experience is never far from her mind.

And so, turning into the November wind, I welcomed him with open arms spread wide. Come on, asshole. Here I am.

It was late afternoon by the time I got back to Mac’s, which meant it was dark as a grave. A sickle moon lolled in the sky, and as I walked from the car to the house flakes of hard, dry snow bobbed in the air around me.

Unexpectedly, Shana hears from her parents that “the decades-old skeleton of Shana’s estranged uncle” has been discovered. Without getting permission, she abruptly takes off for Swanton, Vermont (she justifies her decision by parsing the facts: she isn’t back at work and is technically an independent operator?). Why not go home and solve the cold case? Almost on the heels of arriving home, Mac alerts her to a missing person case in Alexandria Bay.

“Tim’s on it,” Mac assured me, “but you’re still my most senior investigator, so I want your take, too. Because you’re right. It’s bad. A kid’s gone missing, nine-year-old boy by the name of Trey Hayes.” She took a breath and rattled off the details. Local. African American. Brown hair and eyes. Small for his age. “Real cutie,” she said sadly. “Last seen about two hours ago on a field trip to Boldt Island.”

Shana’s on the road again, a 3 hr 22 min (170.6 mile) trip, one way. Back in Alexandria Bay, Shana goes into a “kitschy” gift shop to look for a birthday card for Mac, anything to pass the time, when she notices a new poster with two photos, side by side on the bulletin board near the register. Photos of Shana’s dead Uncle Brett and Trey Hayes: “the kid was smiling, but barely, as if someone was forcing him to. The look in his eyes was pure terror.” Shana takes the poster down and turns it over. There’s a handwritten message: “Wanna play?” Shana knows immediately who kidnapped the boy and almost welcomes the confrontation. She pleads with the locals to play it her way, with mixed success.  Good news: the police don’t find a dead body. Bad news: they find the little boy’s hat covered with blood.

“Get an evidence bag,” said Tim, his voice cold as he reached for the blood-soaked Purple Pirates baseball hat, sticky and black in the half-light.

Time for a Big Reveal aka Massive Spoiler: Shana knows who her erstwhile abductor, serial killer Blake Bram, is.

All the stories my kidnapper told me in the cellar beneath an apartment building in the cellar beneath an apartment building in the East Village were about his childhood. They were also about mine. I didn’t need to dust off old yearbooks to ID him. No rifling through the memory bank for me. The man who murdered three women and a young cop, the guy who drugged me at an Irish pub, was my equal. We shared the same hometown, the same childhood experiences, even the same DNA. With every bone in my body I wished it wasn’t so, but that didn’t change the facts, and denial wouldn’t erase the truth. He was the troubled kid on my mother’s side who ran away at the age of sixteen. Blake Bram was Abe, my childhood companion.

Also Trey’s kidnapper. Abe and Shana were close in childhood and adolescence. They had so much in common like their obsession with Scully and Mulder. Things fell apart when it became clear that Abe was mentally troubled, perhaps even sociopathic. The tension climaxed in a dreadful confrontation that left Shana with a wicked facial scar (courtesy of a rusty nail wielded by her cousin). I’ll go out on a crime-solving limb and say Shana should have told her fellow investigators. It’s hard to imagine a scenario where that’s not the right thing to do. But that’s not how Shana sees it.

My plan had been simple: I would show Bram my cards. Make it easy for him to find me, and keep him focused on me alone. It went against both my principles as an investigator and my police training, but for more than a year, I’d kept his identity a secret from everyone. I didn’t do it for Abe. I was appalled and revolted and deeply ashamed, but more than that, I knew revealing what had become of him to my family would leave them with agonizing questions to which I had no answers yet. As for Mac and Tim, the more they knew about Bram, the less control I had over my pursuit. And I had to get to Bram first.

Abe’s message, “Wanna play?” is crystal clear to Shana. If the citizens of Alexandria Bay ever hope to see Trey alive again, Shana must solve the puzzle of who murdered her Uncle Brett (Abe’s father). Back to Swanton. As the clues rachet up, Shana is joined by Tim in Vermont.

The Dead Season is a gripping thriller that pits a cold case against the plight of a hapless child with Shana Merchant the key to solving both crimes.