Book Review: The Dead Girl in 2A by Carter Wilson 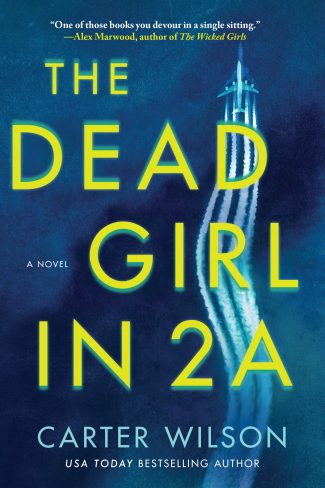 The Dead Girl in 2A

In The Dead Girl in 2A by Carter Wilson, Jack Buchanan and Clara Stowe recognize each other when they’re seated side-by-side on a business flight to Denver, but neither can place where they know the other person from. Clara then admits she is flying to Colorado to kill herself, and quickly disappears when they arrive at the airport, launching this psychological thriller into action.

This is one of those terrific psychological thrillers that borders on the paranormal without ever flying in the face of the laws of reality. Though flying is what our hero, Jake Buchannan, is doing when he runs into a woman who seems disturbingly familiar, seated next to him in first class on a flight to Denver from Boston. They strike up a conversation and the woman, who introduces herself as Clara Stowe, lets slip that she’s flying to Denver in order to kill herself:

I need to do this.

I don’t know why, but that part is losing its importance. I’m not depressed. I don’t hate my life, meager and isolated as it is. And this world…I do love it. Life is a gift, a cosmically improbable fortune, and it should be cherished.

Death is a reward. My death is meaningful. In some way, I’m helping the world by dying.

Distraught, Jake tries to persuade her against suicide, managing to press his business card on her and urging her to call him if she needs to talk, before she loses him in Colorado. Unable to do anything else to help her, Jake tries to put Clara from his mind, in order to focus on the work that brought him to the city. As a writer whose most lucrative assignments nowadays lie in ghostwriting memoirs, he’s flown into town to assist a mysterious man named Alexander Eaton in writing an autobiography. Eaton didn’t balk at the hefty sum Jake quoted him for the work: a relief to Jake, who desperately needs the money. Several months ago, he got into a car accident that inflicted severe head trauma on his only child, Em. As Jake and his wife Abby struggle to pay for Em’s medical and therapy bills, their marriage begins to disintegrate, as does Jake’s own memory.

Jake has always had trouble remembering things, but it’s gotten particularly bad recently. Memory is, in fact, a recurring motif in this novel, as Eaton will so eloquently describe it once the two men finally meet face to face and he explains why he wants to write a memoir:

“And so here I am, left with the one true currency all of us possess.” Eaton lightly taps his index finger against his temple. “When we get to the point of death, whether we know it’s coming or not, all we’ve ever accumulated in life that matters are memories. Things we’ve done. People we’ve loved. Lands we’ve explored. Memories are the truest measure of wealth, and yet they can’t be passed down, not really. Stories can be told, but our memories, those things as unique as our fingerprints, all crumble along with our bones.”

Jake just wants to do the job and earn his paycheck, but the more time he spends with Eaton, the more he’s convinced that somehow, he needs to find Clara and figure out their connection before she can kill herself. But how, and where to start? Then a private investigator with a guilty conscience comes looking for him, and suddenly Jake is faced with the prospect of finding not only Clara but also confronting the elusive past locked away for so long in his erratic memory.

This was a page-turner of a thriller that takes the reader on a wild ride through the outskirts of horror territory to tell a gripping tale of loss and redemption, as Jake and Clara seek to find a way back to each other. Told from each of their perspectives, this book examines such weighty subjects as death, memory and individual potential with a lyrical grace that never gets in the way of the breakneck pacing. I have to say that I was very glad at the story choices Carter Wilson made with the relationship between Jake and Clara, in large part because they weren’t predictable and thus a breath of fresh air in a genre that sometimes prefers to go for shock value over humanity.

Ultimately, The Dead Girl In 2A is a tender, life-affirming novel, but what a ride to get there! Finishing the book was like touching down on terra firma after a bumpy plane ride: a satisfying ending to a harrowing—though in the case of reading the book, very enjoyable—experience.