April 6, 2022
The Darkest Game, the third book in the LAPD Detective Tully Jarsdel Mystery series, is a searing mystery from critically acclaimed author Joseph Schneider about dread, greed, and anguish; how it spreads like rot, and how one detective struggles to keep it at bay. Read our review! 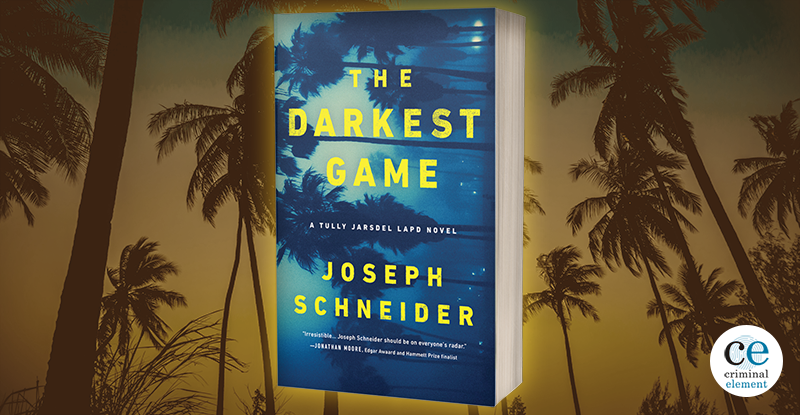 Detective Marcus Tullius Jarsdel isn’t your average cop. Known as the “professor detective” after abandoning work on his PhD in ancient history to enroll in the police academy instead, Jarsdel has the kind of free-floating intellect that helps him piece together disparate clues to solve tricky cases. This serves him in good stead as a member of the revived Hollywood Homicide squad, even if it does give his partner, veteran Detective Oscar Morales, plenty of opportunities to rib him for being a nerd:

He’d begun wearing clip-ons in patrol, where they were required for the officer’s safety. An authentic double Windsor might convey both style and authority, but it wasn’t worth a suspect choking the life out of you. The policy didn’t extend to the Detectives Bureau, however, where clip-ons were considered gauche. But for Jarsdel, practicality outweighed sartorial prestige. He’d calculated that the average detective spent upwards of twenty hours a year tying and untying conventional ties. That seemed an absurd amount of time to spend on a fashion accessory, so he was unique among his colleagues in his persistent fondness for clip-ons.

Jarsdel replaced his glasses and refastened the tie. Morales gave him a disgusted look. “I know you think people can’t tell you’re wearing those, but you look like a sixth-grader.”

After a court case ends in a ruling that disappoints both officers, Jarsdel throws himself into his work. While he’s glad that homicides are down across the board, this means that all he has to work on are cold case files, at least until he and Morales catch a (relatively) fresh murder. A man named Dean Burken has been shot to death in his Laurel Canyon home, and by the looks of it had been dead for several days before being discovered. His home has also been ransacked, seemingly by amateurs. What the perps were looking for is anyone’s guess.

Quickly dismissing the theory that this was a home invasion gone bad, Jarsdel and Morales begin digging into Burken’s personal and professional lives. Turns out that Burken was a Donor Engagement Director at the Huntington Library, Art Museum and Botanical Gardens, a place Jarsdel knows well from a childhood of constant visits with his two professor dads. Jarsdel quickly discovers that shady dealings are afoot at this institution that holds a special place in his heart, and that at least one of these dealings might have been the reason Burken was killed.

Somewhere along the way, Jarsdel develops a rapport with an elderly Iranian American woman whom he checks in on as a favor to a fellow cop. What she reveals about his own Baba threatens to disrupt the already fragile relationship Jarsdel has with his Iranian parent in the aftermath of his other dad’s cancer diagnosis and both parents’ lingering hostility to his bewildering, to them, decision to turn his back on academia for life as a police officer instead.

The first bullet plows through the man’s chest, reducing eons of highly evolved cardiac structures to a smear on the wall. The next two shots take him in the nose and forehead. The fourth and final round would’ve landed only a couple of millimeters to the left, just above the ear, but by then there’s no flesh to meet it. The bullet sails through blood-misted air and buries itself in the brickwork fireplace.

While this passage comes very early on in the proceedings, I actually yelped aloud when reading the novels’ final, violent turn. By turns brutal and brilliant, this third installment in the LAPD Detective Tully Jarsdel mystery series is also surprisingly hilarious. I found myself laughing aloud more often than I expected, usually due to the juxtaposition of Jarsdel’s cerebral preoccupations with Morales’ earthier concerns and commentary. I haven’t had a chance, alas, to read the second book in the series despite thoroughly enjoying the first: I certainly don’t recall the first book being quite as funny as this was though! I do feel that Mr. Schneider’s writing has become more assured with time, and I absolutely loved finding out finally why Jarsdel decided to become a cop. I’m going to have to make time to catch up with the one book I missed in this series, and am very much looking forward to reading future installments as well.

More: Read Our Review of One Day You’ll Burn by Joseph Schneider