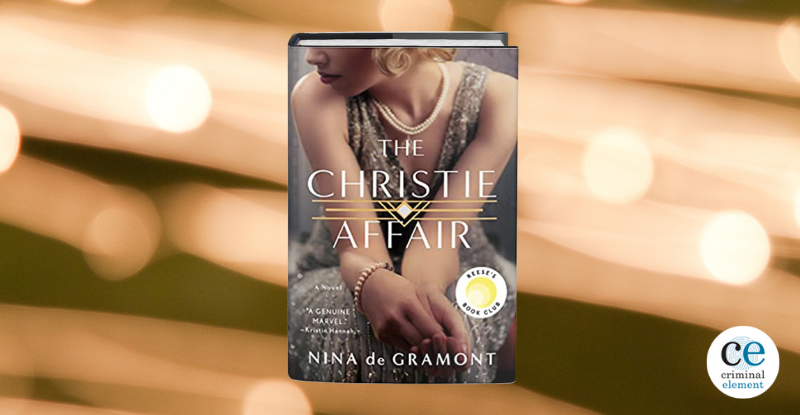 I admit that when I first started reading this book, I expected a fairly tame historical mystery graced by the fictional presence of the grandmaster of mystery writing herself, Agatha Christie. Purporting to advance a theory that explains Dame Christie’s eleven-day disappearance in the 1920s, The Christie Affair reads at first much like the absorbing works of Paula McLain and Gaynor Arnold: solidly researched historical fiction that sensitively explores the emotions of the women involved in turbulent events. It did, however, show itself surprisingly willing to lean into a less than decorous – but very much appreciated by this reader – rage against the horrors committed against women in the early 20th century.

But at about the 72% mark, I realized that this novel, fictionalizing the relationship between Agatha and the woman who replaced her in her marriage to Colonel Archie Christie, was something much more than even the best of its contemporaries in the historical fiction genre. The further I read, the more I was dazzled by what I discovered was also an extremely clever sleight of hand, as Nina de Gramont spins several different and seemingly unrelated mystery threads before snapping them all together into a breathtaking tapestry of crime and heartbreak and, most importantly, communion and grace.

Of course, grace is the last thing our ostensible heroine Nancy O’Dea is expecting from her lover’s wife. She’s worked hard to supplant Agatha in Archie’s affections, and seems far more scheming than sympathetic. She is, as we quickly come to understand, fully cognizant of how much lesser she is morally than the woman whose role she’s trying to usurp:

It’s a particular feeling, the urge to murder. First comes rage, larger than any you’ve ever imagined. It takes over your body so completely it’s like a divine force, grabbing hold of your will, your limbs, your psyche. It conveys a strength you never knew you possessed. Your hands, harmless until now, rise up to squeeze another person’s life away. There’s a joy to it. In retrospect, it’s frightening, but I daresay in the moment it feels sweet, the way justice feels sweet.

Agatha Christie had a fascination with murder. But she was tenderhearted. She never wanted to kill anyone. Not for a moment. Not even me.

Though Nan very badly wants to marry Archie, she counsels him to wait to ask Agatha for a divorce till after the latter has had more time to grieve the death of her beloved mother some months prior. Impatient Archie goes ahead and gives Agatha the break-up speech anyway, resulting in a quarrel that has both himself and his now definitely estranged spouse heading hotly in different directions: him to a weekend house party and her, later that night, on an impromptu road trip. Nan herself has already made plans to spend some time in Yorkshire, in order to lie low and out of any immediate scandal that might result from the split of a famous author and her husband.

But then Agatha’s car is found abandoned on the edge of a quarry near her house, with her luggage still inside. As a manhunt, fueled by a slow press season hungry for sensational stories, gets underway to find the missing novelist, Nan finds herself pulled back into Agatha’s orbit in a battle of wills where love is the ultimate prize and murder a necessary tool of retribution.

My heart both fluttered and ached for the Atonement-like ending, and while the details of the story as written are different enough from the historical facts to make it clear that this is a work of fiction, oh, how I wanted this to be a true chronicle. Ms de Gramont does amazing work here, balancing a fair play murder mystery plot worthy of Dame Christie herself with the kind of characterization that, she dryly notes, the more famous author often skipped over in favor of stereotypes:

Agatha was a rational, practical, contained Englishwoman. How fond her novels were of categorizing people. A woman does this, an American does that, Italians are just like this. Perhaps she felt comfortable with these generalities because she fit her own so splendidly. Stiff upper lip, a fine English lady.

Now she had abandoned her natural character, thanks to me. At the same time, what she did best was spin stories. Plot. All of this had the air of a plot, a way to remind Archie how much she meant to him.

Rooted in fact and reason but charged throughout with emotion and imagination, this is an extraordinary murder mystery novel that dares to invoke the spirit of Dame Christie and succeeds. I could not stop reading that last quarter of the book, so invested was I in the happiness of all the characters I’d come to care for in the course of reading it. I highly recommend this to any reader, but especially to those willing to explore with empathy the many mysteries of the human condition.