Book Review: The Children on the Hill by Jennifer McMahon

April 25, 2022
Inspired by Mary Shelley’s Frankenstein, The Children on the Hill follows popular podcast host Lizzy Shelley who is determined to track down a monster in Vermont. After all, she knows better than anyone that monsters are real—and one of them is her very own sister. 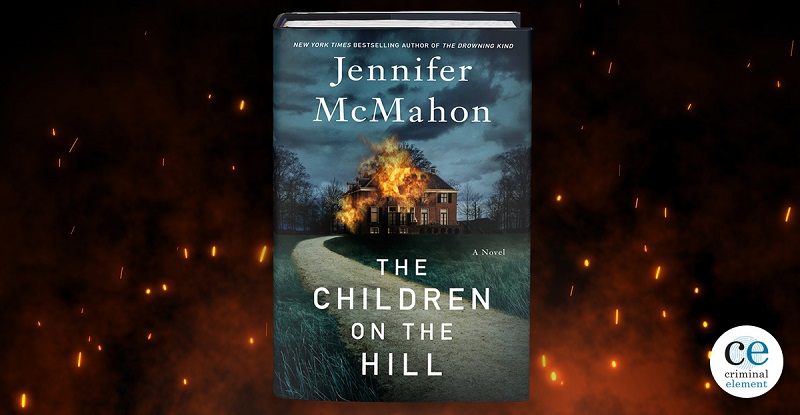 This astonishingly fresh update on Mary Shelley’s Frankenstein had me up reading all night, so absorbed was I in the narrative—and so intent on finding out what shocking plot twist was waiting for me next.

Violet Hildreth lives with her little brother Eric and their Gran on the grounds of an innovative—for 1978 anyway—treatment facility for patients with mental illness. Up in the picturesque Vermont countryside, Dr. Helen Hildreth is famed in certain circles for her compassionate work at the property still known by its former name, the Hillside Inn. She balances her groundbreaking ministrations with raising and homeschooling her orphaned grandchildren.

Violet is thirteen years old the day Gran brings home a strange, skittish child to join their family. Iris has clearly undergone a trauma so unspeakable that it’s rendered her practically mute. Gran charges Violet and Eric with treating her like a sister, in hopes of helping to nurture her fragile psyche back to health. Violet is further tasked with reporting back on Iris to Gran, leading Violet to understand that Iris is likely one of Gran’s special patients.

The siblings quickly take Iris under their wing and initiate her into their private Monster Club. The Hildreth children have always been fascinated with supernatural monsters such as vampires and werewolves, cataloging the different kinds they know about as well as ways to both identify and vanquish them. But when Eric spots what he believes is a real-life monster, their games quickly turn dangerous. As the secrets of Hillside Inn are brought to the surface, tragedy strikes, tearing the children apart from one another and changing their lives forever.

Forty years later, Lizzy Shelley is a semi-famous monster hunter—a reality TV show and podcast star who drives around the country chasing down stories of cryptids and related phenomena. Several years ago, however, she began to notice a disturbing pattern: after confiding in a loved one that they’d recently made contact with a local monster, teenage girls were going missing around the time of the full moon. Since then, she’s been painstakingly and quietly gathering information on the disappearances, even when no one else seems interested:

I didn’t go to the authorities. I was sure they’d look at what I had and say just what the local police always did: These girls were runaways.

And why would they listen to the crazy theories of a woman who hunted monsters for a living? Besides, once they found out who I really was and where I’d come from–well, that was a road I didn’t want to go down with law enforcement of any sort.

So I investigated on my own. Crisscrossed the country, searching, hunting.

Lizzy, you see, is convinced that the disappearances have to do with her own past at Hillside Inn, and that the person ultimately behind them all is her own long-missing sister. After tragedy thrust the institution into the national spotlight, all three children changed their names and did their best to obscure their connection to the place. But while Lizzy and her brother chose to live relatively normal lives, their sister disappeared into the dark and seems to now be intent on taking other young girls with her. Can Lizzy track down the monster that her sister has become and stop her before anyone else gets hurt?

Told from the perspectives of Lizzy, young Violet, and the present-day Monster that emerged from the wreckage of Hillside Inn, The Children on the Hill is a compelling update on the themes and events of Mary Shelley’s classic horror novel. Lizzie and the Monster are both inextricably entangled as they chase each other through an eerie American landscape at once modern and mythical. As with its source material, the Monster’s voice is as compelling as our supposed hero’s, even as she’s describing an act of predation:

I have weeds woven into my hair. I am covered in a dress of bones, sticks, cattail stalks, old fishing line and bobbers. I am my own wind chime, rattling as I run. I smell like the lake, like rot and ruin and damp forgotten things.

I can easily overtake this girl. But I let her stay ahead. I let her hold on to the fantasy of returning to her old life. I watch her silhouette bounding through the trees, flying, floating.

And just like that, I’m a kid again, chasing my sister, pretending to be some movie monster (I’m the Wolf Man, I’m Dracula, I’m the Phantom of the motherfucking Opera) but I was never fast enough to catch her.

But I’m going to catch this girl now.

The cat and mouse game between Lizzie and the Monster ends in a startling confrontation as the truth behind everything that’s happened is revealed. Jennifer McMahon has written a terrifically twisty tale that keeps going even after you think you’ve figured everything out. It’s a wonderful, page-turning adaptation of the classic allegory to modern science and mores, and one of the more clever of this ongoing canon. Recommended.