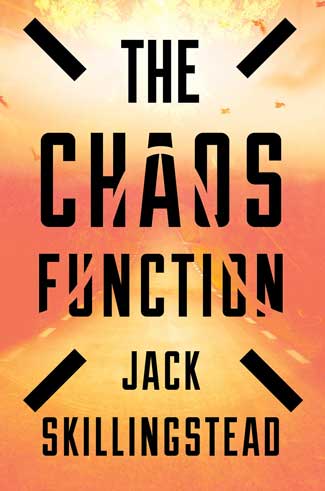 The Chaos Function by Jack Skillingstead is an intense, high‑stakes thriller with a science‑fiction twist that asks: If technology enabled you to save the life of someone you love, would you do so even if it might doom millions?

The idea of choice and consequences are an essential aspect of crime fiction, and really any good story. We follow a protagonist to see how they wrestle with difficult decisions and the impact their choices have on their life and the world around them. But what would happen if one person suddenly found themselves making choices that could literally rewrite history and impact the planet? How would they use that power? And should they?

These are the central questions that fuel Jack Skillingstead’s new novel, The Chaos Function. The answers he provides make for a fun, thrilling, and powerful read that is one part action thriller, one part sci-fi tale, and one part Groundhog Day.

A story is only as strong as its characters, and in The Chaos Function, Skillingstead gives readers a great protagonist. Her name is Olivia Nikitas, and she’s a veteran journalist. When we first meet her, she’s covering the conflict in Syria, which in a heartbreaking but very realistic-feeling twist has continued into the book’s near-future setting. She’s tough and incredibly capable, which makes her interesting, but what I find most appealing about the character is she’s also damaged. She bears a number of emotional scars, stretching all the way back to her adolescence where she lost her mother. As an adult, her only living relative is her estranged stepmother, Rohanna, who lives in India:

And she had redecorated the house … As a teenager Olivia had found it off-putting. But maybe she had needed to find it off-putting. Otherwise Rohanna might have legitimately occupied the space left by Olivia’s real mother. Give her a chance, her dad used to say. She loves you. Yeah, well…

Olivia doesn’t just keep her stepmother at arm’s length. She’s also had few genuinely romantic relationships. But when the novel begins, she’s reluctantly let someone in—an NGO worker she met in Syria named Brian. Brian is a great character and provides a nice optimistic counterpoint to Olivia’s cynicism. Unfortunately for her, though, Brian dies in the novel’s opening chapters. Minutes after his death, Olivia is given a fantastic and mysterious ability that lets her literally rewrite reality, and suddenly, Brian is back.

“I don’t understand what’s happening. You aren’t dead. I tried to save you, but I couldn’t.” She was babbling, and stopped herself. Brian looked confused.

Brian’s resurrection has severe consequences. In using her new ability, Olivia has meddled with other events and caused a global pandemic. She’s also put herself in the crosshairs of the mysterious secret society that looks after the ancient device that powers Olivia’s abilities.

Olivia’s clash with the Society also brings her into the orbit of two of the group’s most interesting and sympathetic members: Alvarao and Dee. Alvaro was a close friend of the man who previously wielded the power Olivia controls, and Dee is the Society’s first woman guard. Dee firmly believes a woman can use their probability altering device to change the future for the better.

Those two, along with Brian, accompany Olivia on a cross-country journey as she deals with the out-of-control global pandemic and tries to use her ability to eliminate the threat and create a present where Brian is still alive.

Skillingstead shines in this section of the book because we see Olivia use her ability a number of times and fail miserably. It’s why I compared the book to Groundhog Day because the same events play out differently but also in considerably worse scenarios. You feel panic and terror as America comes apart at the seams, but you get moving moments of kindness as well.

The driver tucked the gun under her belt. “Sorry about the piece. Things have gone a little south, and you’ve got to be careful. My name’s Astina—that’s Cree. It means, ‘hope,’ but don’t count on it. I can give you a ride into Clewson, you want.”

My only real problem with The Chaos Function as a whole is that the part of the story where Olivia is trying to fix the apocalypse she nudged into motion goes on a little long. That’s forgivable, though, because in the final part of the novel, Skillingstead rewards readers for their patience. You get some action, some exciting and imaginative twists about the nature of the probability machine, and a conclusion that’s both epic and intimate. The Chaos Function delivers both action-packed thrills and a profound meditation on the idea of choices and consequences.