January 8, 2021
In the sixth installment in Nick Petrie’s Peter Ash series, Peter must face a ruthless tech thief, an eerily cheerful assassin, a brilliant and troubled inventor, and a revolutionary technology that could wreak devastation in the wrong hands. 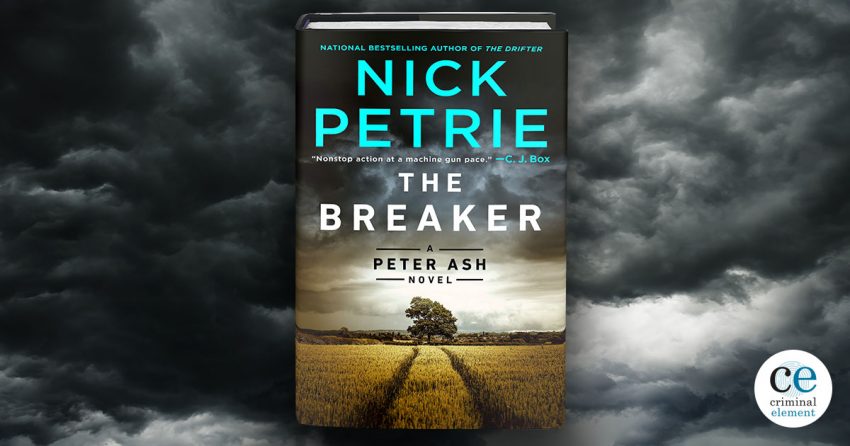 It’s been almost a year since former Marine Peter Ash’s misadventure in Iceland landed him on the FBI’s Most Wanted (see: The Wild One). Since then, he’s been keeping his head down and living simply in Milwaukee with his ladylove June Cassidy and just down the street from his old friend Lewis, supporting the former in her investigative reporting and helping the latter with a home repair business.

But trouble always seems to find Peter. One afternoon when he and Lewis meet up with June for lunch, the three spot a gunman entering a crowded marketplace.

June put a warm hand on Peter’s bare arm. She didn’t say anything, but she didn’t have to. She knew who he was, the man the war had made. Wound up and restless and hardwired to make himself useful. She’d seen what that could mean, in moments like this. She still didn’t like it.

She tightened her grip on his arm and picked up her phone. “I’m calling 911. The police will handle it.”

“Great idea,” Peter said. “Lewis and I will just go into the Market and wait for them to show up.”

June looked at him like she could see the marrow of his bones, down to each individual molecule. Down to the werewolf that lived inside of him. Softly, she said, “Can’t it be someone else’s turn? Just this once?”

Peter knew she didn’t mean it, not really. He leaned in, pressed his lips to her freckled cheek, and breathed in her summery smell, the clean athletic tang of fresh sweat combined with some complex, exotic scent he’d never been able to resist and could no longer live without.

“Is that who you want me to be?” he asked. “Someone who doesn’t step up when something bad is about to happen?”

The fallout of Peter’s intervention isn’t at all what the trio expected — turns out the gunman isn’t a mass shooter, and that he had a very particular target in mind. A target with ties to a shadowy government agency Peter and June have already encountered before.

Within hours, a psychotic, ax-wielding hitman is on June’s tail, determined to silence her before she can dig any deeper into the event. At the same time, Peter and Lewis are tracking down the gunman and the target, both dangerous in their own ways. Their hunt leads them into a world of life-changing technology, old grudges, and even older greed.

None of them meant to stumble into this mess, but now the only way out is through. Their lives, Peter’s freedom, and the safety of millions are now on the line. The good news: if they’re successful, Peter’s name will be cleared of the false charges…

“Some say honor is an antiquated notion. But our word is all we have in this life. And how we cleave those words to deeds. I believe you understand this. Your actions indicate that you are a man with a profound moral center. You wish to do what is right.”

Peter had to will himself not to pull the trigger then and there. “Asshole, you don’t know a goddamn thing about me.”

Oliver’s eyes were the color of night. “Do you know what a black hole is, Mr. Ash?”

“A collapsed star. A gravity well so powerful that even light can’t escape.”

“Invisible to the naked eye, yet its gravitational field affects everything around it. Like a black hole, Mr. Ash, you reveal yourself through the nature of the events that surround you. And the quality of the people who give you their loyalty.” He glanced at Lewis, then gave Peter a skeletal smile. “I find that loyalty goes both ways, does it not?”

He didn’t need to make the threat explicit. Peter was well aware of the danger his fugitive status posed to June, and to Lewis and Dinah and the boys. The wreck it would make of their lives.

Honor was a sword that cut deep, no matter who swung the blade.

But, as is always the case when Peter does the right thing, there’s going to be an awful lot of blood spilled before the end.

The Breaker is the sixth installment in Nick Petrie’s Peter Ash series, and the PTSD-plagued protagonist continues to impress and delight. Peter may be jaded by his time in Afghanistan and may have plenty of demons thanks to his bad war, but he is not the angsty asshole hero so common to this genre. No, Peter is a decent, quiet, and kind man who just happens to be very skilled when it comes to lethal force. He’s good with dogs, he likes to make things with his own hands, he values the small pleasures in life, and he deeply loves June, the woman he met all the way back in book two, Burning Bright (unlike Bond, he has no interest in trading in for a new girlfriend with each adventure).

It’s so dang refreshing to see a hero like Peter in an action-packed setting. He’s plenty manly and capable when the bones start to break, but he’s not the usual testosterone-soaked, wisecracking, muscle-bound lead. And it’s also great to see an ex-military hero struggle realistically with PTSD:

Peter and June went to the market at least once a week. The crowded, noisy environment was a good place for Peter to push the limits of his post-traumatic stress, an acute claustrophobia that was his only souvenir of his many combat deployments overseas. It came from kicking in doors in Fallujah, he figured. All those weeks of fighting house to house, room to room, clearing insurgents one doorway at a time.

He called it the white static, and it didn’t like crowds or enclosed spaces. It began with jangling nerves that sparked up his brainstem like naked electrodes under the skin, calculating firing angles, searching for exits, his fight-or-flight reflex gone into overdrive. When he first mustered out, he could only handle twenty minutes indoors before the static turned into a full-blown panic attack, bad enough to make living outside seem like a good idea. For more than a year, he’d slept alone under the stars or under a rain fly, high above the tree line of one mountain range or another, barely able to manage resupply in small-town grocery stores.

The static had gotten better, until it got much worse, bad enough to make him think seriously about dying. Then it had changed again, and now it lived in his head like a low-grade fever, a heavy hum just below the level of his conscious mind. Until his old combat instincts woke up and the hum revealed itself for what it really was, the deep rumble of a high-performance engine just waiting for someone to step on the gas.

It’s that degree of realism grounding the action that makes the Peter Ash series both believable and so enjoyable. Yes, there are always extremely high stakes and often layers of conspiracy at work. The Breaker is no different, with Peter and Co. racing against a ticking clock to stop dangerous blueprints from spilling onto the internet and a power-hungry millionaire who’s building a metallic army. But with Peter as our lynchpin, Nick Petrie keeps everything tethered to reality.

Petrie’s solid prose does a lot of heavy lifting, too. He’s a master of unfolding larger-than-life dilemmas in a straightforward fashion, laying out catastrophic possibilities in a truly chilling way and ratcheting the tension up to eleven every time a baddie makes a move. Peter’s capability as a hero is only matched by Petrie’s capability as a writer. Six books in, Petrie has yet to disappoint even a little. His plots, his action scenes, and his characters are always deeply satisfying. You can pick up any one of his novels assured that you’re in for a solid, exciting ride.

Speaking of characters: The Breaker boasts yet another colorful batch of heroes and weirdoes. There’s the 98-year-old nosy neighbor who’s taken a shine to Peter and survives solely on Girl Scout cookies and scotch. Sparks, the technological prodigy whose ideas could reshape the world. A wheelchair bound welder-slash-artist named Kiko. And then there’s Mr. Cheerful, a smiling psychopath with a penchant for blades guaranteed to send a shiver down your spine every time he appears.

Like every installment of the series, The Breaker has a rich cinematic quality to it, with its vivid fight sequences, larger-than-life supporting cast, and likable heroes. Don’t be surprised if a Peter Ash movie or show gets greenlit in the near future; if anyone deserves to be the next Bourne, it’s Ash.

So if you love Jason Bourne and Jack Reacher… If you’re hungry for more action and looking for a solid hero worth rooting for… If you need something to get your blood pumping in all of this cold weather… Look no further. Peter Ash is sure to scratch that itch in a most gratifying way.