Book Review: The Bone Orchard by Sara A. Mueller

April 5, 2022
As a civil war threatens to tear her adopted country apart, a necromancer named Charm is charged with solving the Emperor's murder in Sara A. Mueller's The Bone Orchard. 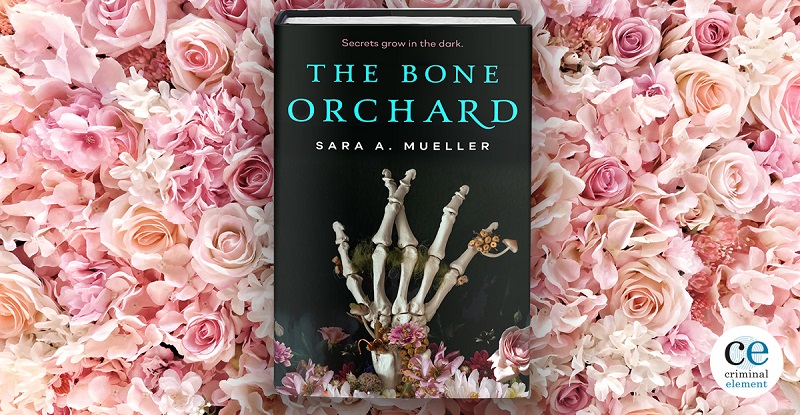 Charm presides over Orchard House, the foremost gentlemen’s club in Boren, where those with money and inclination can find an excellent meal and amiable company, whether it be at the card tables with other members of the nobility or in the rooms on the second floor with one of Mistress Charm’s boneghosts. Charm is the mistress of the Emperor, who took her as a captive from her homeland of Inshil many decades ago and set her up in this stately home now turned into a bustling enterprise.

But Charm was not always in the hospitality business. Back in Inshil, she was considered one of the greatest necromancers of her age, capable of growing entire human beings from the bones she carefully tended from her orchard. In order to imbue these boneghosts, as she calls them, with an animating force, she must splinter off parts of her own personality, resulting in her staff consisting of women named Pain, Pride, Justice, Shamem and Desire, each embodiments of the relevant part of her psyche. Some parts are now more independent than others, but almost all of them have reconciled themselves to living in Boren, even if a small, secret part of Charm constantly longs for home.

So when Charm is summoned one evening to the Emperor’s bedside, she’s shocked to discover that he’s dying, and that he suspects one of his four sons of poisoning him. He promises her freedom if she can find out who did it and avenge his death. Charm agrees, even as she reels at this massive change to the terms of her existence:

The lack of her emperor at the center of Boren was a gaping hole in her orderly life, jailer though he had been. She wanted him to talk to, and she hated it. He had been her captor, but also her steadiest company for so long. And now he’d put freedom just tantalizingly out of reach. So close she could scrabble at the edges of it. And he had known she would. Until her fingers bled.

The trouble is, all four of the Emperor’s sons are horrible people who could each have easily ordered his assassination, if not actively taken part in it themselves. Charm must use her formidable talents as well as her unique position in the demi-monde to figure out not only who killed the Emperor but why, even as civil war threatens to tear apart the country that she—or at least a strong part of her—has reluctantly begun to think of as her own.

This was a fascinating, complex tale of court intrigue and Baroque machinations in a Gothic dark fantasy setting of vivisectionists and necromancers, plying their morally ambiguous trades. The politics are sweeping and believable, and the magical science intriguing, suiting the plot elegantly. It is not, however, for the faint of heart. When, for example, Shame is attacked by a raging patron with a cheese knife, Charm places her in a resurrection tank to heal, but is horrified to discover a complication some days later:

Mold was creeping beneath the skin on Shame’s face, veining the porcelain fairness with deadly midnight blue. The edges of her wound had bloomed open under the pressure of the growing mass. Whips of the cheese mold floated free like grotesque tentacles in the empathy fluid. The contamination had spread across the bridge of Shame’s nose, the color beneath her skin mimicking bruises. It had crept down into the major blood vessels in her neck, and from there it had transformed her breast into a grossly swollen, lumpy tumor.

I always love when a book blends science with magic like this, gruesome as the results may be. However, my absolute favorite part of this promising debut novel was the clever construction of the many-layered mysteries. From the secret of who killed the Emperor to the stunning revelation of why, I was thoroughly impressed with the way the mysteries, even the seemingly smaller ones, were carefully obscured and revealed throughout the course of this tale. The characters can be somewhat difficult to like—in large part due to Sara A. Mueller’s understandable need to give them each the weight they deserve, warts and all—but the resolution is emotionally satisfying, making for the perfect kind of gateway book for people looking to branch out into reading new genres, whether from mystery to dark fantasy or vice versa.