Book Review: The Body in the Wake by Katherine Hall Page 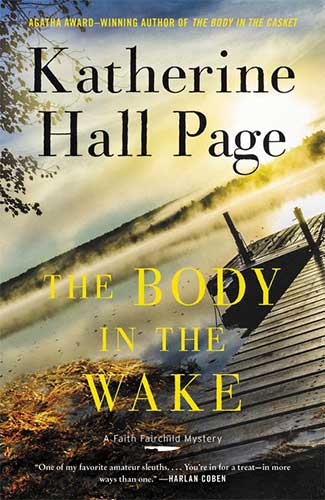 The Body in the Wake

The Body in the Wake by Katherine Hall Page is the 25th book in the award-winning Faith Fairchild series where Faith’s “dead-body-free summer” is abruptly canceled.

Katherine Hall Page published The Body in the Belfry in 1990, the first in her celebrated Faith Fairchild mystery series. The series was a hit from the start, winning the coveted Agatha Award for best first mystery. The Body in the Wake is the silver anniversary entry and it exemplifies the secret sauce that keeps readers coming back.

Unusually, Faith’s slate is clean and she’s looking forward to some me time at her beloved summer retreat in Maine. Her young friend Sophie is worried that she’s having fertility problems, there’s an upcoming wedding to help plan, but Faith’s family is fully occupied with their own concerns. Faith’s husband, Tom, an Episcopal priest, is working on a scholarly project although he is no doubt praying that Faith will have a dead-body-free summer.

Check out our exclusive Q&A with Katherine Hall Page and enter to win a copy of her new mystery!

Sam and Pix’s daughter Samantha is getting married on Sanpere Island, which can’t be found on a map but is “very much based on real Deer Isle in Penobscot Bay, Maine.” Pix and Sam Miller are Faith and Tom’s dear friends from Aleford, Massachusetts. Lest you google Aleford, it too is fictional. In a 2011 interview with her hometown paper in Lincoln, MA, Page talked about Aleford: “Aleford isn’t Lincoln, or Lexington, or Winchester—it’s little bits and pieces of all of them. It’s probably about the size of Carlisle.” Readers were introduced to Sanpere Island in Page’s second book, The Body in the Kelp. Aleford and Sanpere Island are populated with families and friends who show up in all of Page’s The Body In books (although not all at the same time).

Domestic troubles are so relatable: who hasn’t endured an obnoxious neighbor? The last thing the Millers need are folks wielding chain saws. When Pix sees her new next-door neighbors decimating the trees that are a feature of the shoreline, she begs her lawyer husband to drive up to Maine right away because it’s illegal to chop down trees so close to the shoreline. Sam’s conversation goes badly.

Rather than take the shortcut, Sam walked up the road. He was back in ten minutes. It took five minutes to reach the cabin. The conversation must have been brief.

Pix quickly started lunch as Sam expressed his feelings using language never employed in front of the children, even though said children were now adults.

“What can we do?” Pix realized she was letting the sandwiches burn and quickly took them out of the iron skillet.

“I don’t know, honey. All I know is it will be expensive. We’ll have to get Mainescape down here to put in a staggered row of evergreens twelve feet from the property line to be sure legally and maybe some sort of fencing up her by the house if that area is cleared too.” He sat down and eyed the oozing sandwich with obvious anticipation. “Now let’s try to forget about it for now. Tell me about this body Faith and Sophie found.”

All the traditional elements of a Faith Fairchild mystery are present in the above passage. Domestic concerns are a backdrop that provides relief from the task of unraveling what lays behind Faith’s latest dead body. The Body in the Wake serves up unruly neighbors, an unexpected arrival in the person of Samantha’s problematic mother-in-law-to-be, and, as always, delicious food (that’s a smoked gouda grilled cheese sandwich). Readers know to flip to the end of each book, not to discover the murderer’s identity but to revel in the recipes kindly provided by the ladies Fairchild and Page. When islanders aren’t creating yummy meals at home, they dine out at a mouth-watering array of restaurants. Like El El Frijoles: “… Mexican food goes Down East. Sam was addicted to their spicy lobster tacos, and Pix equally to their crab quesadillas.”

But back to the body Faith and Sophie discovered while swimming at the local freshwater pond. It was a young man with a scary tattoo: “a life-like green adder snaking up his right forearm, its fangs dripping blood and a few Gothic letters in red.” While relaxing on the porch, “watching the start of what promised to be a stunning sunset,” Sophie can’t stop thinking about the body. When her husband, Will, hard at work in Savannah, suggests he come up right away, she says she’s fine, but she really isn’t. Island life doesn’t feel quite the same anymore. There are more “angry people” who seem unable to manage “a kind of surface harmony.”

Sophie had talked about it with Will on one of their late-night chats. He’d said it was the same everywhere and compared life now to a kind of large-scale road rage. Sometimes, he had said, you really were cut off, but mostly the rude gestures were because of what else was going on—nothing that had anything to do with the rules of the road. Worry, fear, not enough time or money. She’d agreed.

That’s the other side of a Faith Fairchild mystery. Faith delves below the surface of what appears to be a charmed existence—a loving family, a fruitful catering career—and emphatically notices currents of unhappiness and distress that others might ignore. A conversation with Ed Ricks, a physician who’s been coming to Sanpere Island since childhood, turns to his work as “a volunteer with the ambulance corps.”

“Did you know that we carry NARCAN? And I keep extra gloves in my car to pick up syringes and other paraphernalia tossed along the roadside.” He shook his head. “I was on duty when we took the young man you found to the hospital. It wasn’t just the marks on his arms, but I could tell from his teeth that he was a heavy user. Heroin causes dry mouth, and there’s no saliva to wash away the bacteria. Unser also tend to grind their teeth. He was probably into meth as well, which causes decay in a short amount of time.”

“We are aware of it and talk a lot about what’s happening.” Faith said. “We’ve never locked our doors, but there have been so many break-ins that if both cars are out of the drive, we do now . . .”

Doesn’t this sound like a conversation that’s about to veer into head-shaking about the good-old-days and what-is-the-world-coming-to? But it doesn’t. Faith shares that some members of Tom’s congregation need help coping “with a family member’s addiction.” The biggest problem is the shame they feel. Ed says the same thing.

There’s no one magic solution. Addicts aren’t criminals, no matter what anyone says. No one would say that about someone who was diabetic or had cancer. Relapses are part of the illness, just like other diseases, and they don’t mean the individual is weak. The name ‘Heroin’ was a late-nineteenth-century trademark for the drug, because it made the patient feel ‘heroic.’ We never needed heroes more than now.”

Katherine Hall Page is a heroine to the Malice Domestic community—a group that “celebrates the traditional mystery, books best typified by the works of Agatha Christie.” Mysteries under this loose umbrella “contain no explicit sex, or excessive gore, or violence,” but in Page’s skillful hands, her stories do not skirt the reality of life today. Faith Fairchild’s world champions family and friendship, a love of history and place, and the pleasures of home and hearth, but it is not divorced from sadness and pain. And that also keeps readers returning—yes, her books are a delightful respite and undoubtedly grace many a summer hammock or beach chair, but they are threaded with compassion and grace.

Something you might not know about Ms. Page: She has won “all three Agatha Awards: Best First Novel, Best Novel, and Best Short Story.” Brava!