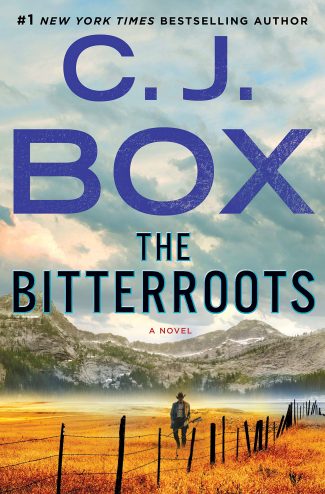 C.J. Box has a knack for delivering crime narratives set in gorgeous places that are packed with action and drama and are populated by characters that feel real. The Bitterroots is no different. In fact, between the female lead, the outstanding sense of place the novel conveys, and the family of monsters Box placed at the core of his narrative, The Bitterroots is one of his best books in a while, and that’s saying a lot.

Cassie Dewell used to work as a sheriff’s investigator, but now she’s making a living as a private investigator. Her plate is full and the cases she’s working are going relatively well. That changes when one of her clients, a defense lawyer, calls her and asks her to look into the case of a man accused of assaulting his niece. Cassie doesn’t want to take on the assignment, but she does. The case takes her to the Bitterroot Mountains of Montana, where the Kleinsassser family runs the entire town from their ranch. They are a dark, corrupt bunch prone to violence and misogyny but obsessed with loyalty to the family and maintaining the status quo. For them, the man accused of assaulting the young girl is a traitor because he left the ranch and made his fortune elsewhere. As Cassie explores the family’s history and the young woman’s story, cracks begin to appear. She soon learns the Kleinsassers’ power goes above and beyond anything she could have imagined, and getting to the bottom of the case will put her life in danger in ways she can’t fully understand.

Box does a few things very well here. The first is history. While we usually think of science fiction and fantasy as the genres where worldbuilding and invented histories reign supreme, Box has created something as full and immersive as anything those genres have to offer with the Kleinsasser family. Their roots are old and deep in Lochsa County, and the ranch is a place where a lot has gone down. As Cassie learns about them, the reader is exposed to generations of darkness.

Box is very talented at injecting his narrative with a sense of place. He writes about roads, vistas, mountains, and towns with ease and places the readers inside the story like few other contemporary crime writers:

As she drew closer to Lochsa County, she was reminded of observations she’d made in her high school sports days when the bus she was in ventured to that part of the state. While Montana was made up of mountains, valleys, rivers, and plains, it was as if those massive formations and vistas were pushed together and jammed against a wall the further one traveled west. Mountain ranges seem taller and closer together, meadows and hayfields were smaller and steeper. It was as if the terrain of the state was pinched together from the sides up against the sawtooth border of Idaho – which ran along the top of the Continental Divide all the way to Canada – and it was all extreme and mildly claustrophobic.

Lastly, there is dialogue. Box has a keen ear for making conversations sound real. Sure, there is legal jargon here and there and some instances in which a conversation is used to provide information instead of pushing the story forward, but those instances are few and far between. What readers get most of the time is people talking about what they think, what they know, and what they wish they knew. A perfect example comes from one of the Kleinsasser women, who Cassie interviews in order to learn more about the family:

There are no happy endings here. Instead, readers get a lot of death, violence, and heartbreak.

In general, crime novels from bestselling authors tend to have a somewhat formulaic feeling to them. Readers can expect the hero to survive at the end and a somewhat happy resolution despite the madness that may precede it. That’s not the case with The Bitterroots. First, Box delved deep into the darkest corners of human nature and showed that sometimes doing horrible things is almost acceptable as long as they are done to horrible people. Similarly, he explored the possibility of evil triumphing by defeating a larger evil. There are no happy endings here. Instead, readers get a lot of death, violence, and heartbreak. This might make the novel sound like a dark read, and perhaps it is, but its darkness comes from Box’s unapologetic look at human nature and the things that go on when powerful families are allowed to dictate what goes on behind closed doors in every powerful office in a small town. These things, more than anything else, make The Bitterroots a gripping, entertaining, immersive read.

Read an excerpt of The Bitterroots now!