December 10, 2021
The Ballerinas is a captivating, voice-driven debut novel from Rachel Kapelke-Dale about a trio of ballerinas who meet as students at the Paris Opera Ballet School. 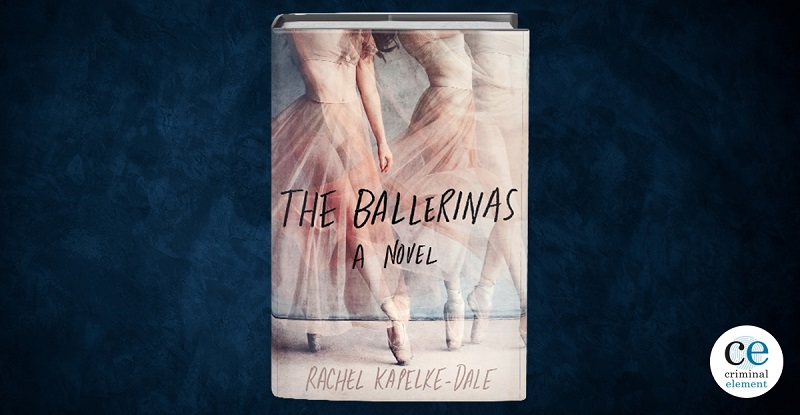 Ever since they were child ballerinas coming up through the ranks of the Paris Opera Ballet School, Delphine, Margaux, and Lindsay have been the best of friends. Delphine, the daughter of a former POB star, is the nice one, wild-haired, sharp-tongued Margaux is the vindictive one, and gorgeous American Lindsay is the hot one. As the girls grow up, learning their craft and competing for the few coveted spots for advancement that open up each year, they freely share their triumphs and heartaches, until one unimaginable betrayal changes everything.

Years later, a 36-year-old Delphine is returning to Paris from her time in St. Petersburg, where she’s given up performing in favor of developing a career as a choreographer with the Mariinsky Ballet. The POB has commissioned her to create several new pieces for them, and Delphine is determined to use this chance to further the careers of both her friends, stuck still as soloists and with only a scant few years to make principal before facing retirement. The perpetually sunny Lindsay is eager to seize this opportunity but Margaux is far more suspicious, eventually confronting her old friend and demanding they apologize for their sins:

“But what good would it do for her, apologizing? It would just be for us.”

And so a guilt-ridden Delphine strives to make up for what she’s done by giving her friends the future of their dreams. The trouble is, dreams are always hard to achieve, even with a fairy godmother in your corner. Delphine soon finds herself battling not only the demons of her past but also the many obstacles set in the way of women in the dance world. Whether it be demanding artistic directors, competition from eager and more flexible younger ballerinas, or the rampant misogyny that insists that women know their place, Delphine finds herself hurdling countless barriers as she seeks to repair her dearest childhood friendships. But how far will she go to get what she wants… and would she go so far as to kill?

This atmospheric novel felt so much like an insider’s view of life in the European ballet world that I’m genuinely surprised Rachel Kapelke-Dale was never herself a professional dancer with the POB. She writes beautifully about the cities of Paris and St. Petersburg, romantic settings that place into harsher focus all the ways that women find themselves unwittingly affirming the patriarchy that wishes to control their bodies. Nowhere is this more bleakly apparent than in the seemingly female-focused world of ballet that an adolescent Delphine both loves and abhors:

I knew what the fucking point was: the point of all of this. We’d honed ourselves for so many years into something resembling perfection. Developed our strength, our control. And from here, the boys would go on to build more, more, growing their muscles and getting bigger and better and stronger. But for the girls, it was something different. It was about taking our strength and making it pliable, supple, compliant.

Delphine is a complicated heroine, who starts out blind to her own poor judgment before growing increasingly disillusioned by the phantoms she’s chasing and then, in the novel’s climax, lashing out in an attempt to make up for all the times she’s failed the concept of sisterhood before. The Ballerinas is most powerful when it speaks of feminine solidarity—when characters such as Delphine refuse to be cowed by the men in their lives and stand up for not only their own autonomy but also for what’s right, no matter the often harmful consequences. While I felt that some of the career moves were accepted more prosaically than the build up to those points would warrant, I did feel that this was a moving testament to the power of feminism and genuine friendship to heal wounds and work toward a better tomorrow together.