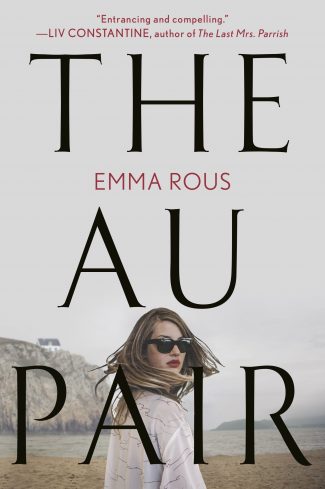 In Emma Rous’ debut novel The Au Pair, Seraphine Mayes discovers a troubling photograph her family’s Norfolk estate while attending her father’s funeral. She tracks down the family’s au pair to further investigate, and a decades-old family secret begins to unravel.

A family mourns the sudden death of their father. Seraphine Mayes, her twin brother Danny, and their older brother Edwin are reeling after the funeral, but the boys are ready to get back to their lives. Seraphine, not so much. She adores Summerbourne, the family estate by the sea in Norfolk. Poking through her father’s effects, she finds a photo of her mother holding a baby.

I flip the photo over, and my father’s distinctive scrawl confirms it was taken on the day we were born, just over twenty-five years ago. I already knew it could be no later, because on the same day Danny and I were born, our mother jumped from the cliffs behind our house and killed herself.

Seraphine is dumbfounded. Which baby is her mother holding? Why isn’t she holding both twins? Seraphine is a dog on the scent, interrogating everyone about the picture and what happened years ago. She tracks down Edwin’s au pair, Laura Silveira, who worked for her parents, Ruth and Dominic Mayes for eleven months. Eighteen-year-old Laura joined the Mayes household in August 1991, but after Ruth committed suicide, she disappeared. Seraphine wants answers from the person who was there at a critical time.

But if Laura was there—if Laura saw what happened between this photo being taken and our mother jumping—perhaps I don’t have to spend the rest of my life not knowing after all.

Seraphine tracks down Laura through her old address, and although she sees her leaving her workplace, they don’t have a conversation. Not yet.

Twenty-one days since my father’s accident; nine days since his funeral. I can’t make any decisions sitting in my roasting car on this tired, dusty street. I wipe my palms on my dress and tap Summerbourne into the GPS. I’ll be able to think about it all more clearly when I get home.

Emma Rous switches the narrative to August 1991 when Laura is on her way to meet the Mayes. The chapters alternate between the two women’s voices, adding to the mystery and suspense. Is the truth hidden in the past or are there contemporaries who know the answers? The synchronicity is fascinating: Dominic Mayes dies in August 2017, the same time of year that Laura is interviewed by Ruth Mayes and Ruth’s formidable mother, Vera Blackwood. Lastly, there is a significant literary clue to Laura’s introduction to the Mayes household.

Greengages. I always associated my first visit to Summerbourne with those shy green plums, whose ordinary-looking skins hide such astonishing sweetness. In my eighteen years as a city girl, I had never even seen a greengage, but they grew abundantly in the woodland at the back of the Summerbourne garden, and I devoured several that day. They tasted of honey and sunshine and new beginnings.

Is Rous implying that Laura is a shy green plum? Are the tempting greengages analogous to the apple in the Garden of Eden? How will Laura’s “new beginnings” end? Rumer Godden’s famous novel, The Greengage Summer, immediately comes to mind. The Greengage Summer is set in France but its plot parallels The Au Pair. Godden’s English heroine, “16 year old Joss, the oldest Grey girl, suddenly, achingly beautiful,” attracts the attention of a “charming Englishman” staying at her hotel. Like The Au Pair, the story unfolds slowly, almost imperceptibly, but all involved are forever changed: “They would merge together in a gold-green summer of discovery, until the fruit rotted on the trees and cold seeped into their bones.” Seraphine’s quest is to discover what happened so many years ago in those halcyon days. The tension is unrelenting. The Au Pair is a detective story for adults, it pokes and prods at the sinews of family secrets.

There’s no higher book recommendation than to suggest a reader set aside time to race to the finish—in the case of The Au Pair, they won’t be able to stop themselves.