Book Review: The Art of Theft by Sherry Thomas

October 18, 2019
In The Art of Theft from Sherry Thomas, USA Today best-selling author of The Hollow of Fear, Charlotte Holmes, Lady Sherlock, is back and solving new cases in this Victorian-set mystery series. 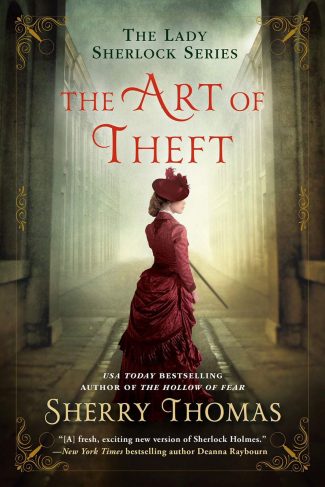 The Art of Theft

Sherry Thomas’ “Lady Sherlock” series may be the most female-centric reimagination of the great detective that I’ve ever read.

And, as a die-hard reader of all things Sherlock Holmes, who’s also written books inspired by the original Arthur Conan Doyle series, I can say that The Art of the Theft, the fourth book in the Lady Sherlock series, is a great continuation of the story.

For those not familiar with the series, Charlotte Holmes is the lead detective in Victorian-London set mysterious who fronts for an invented imaginary brother, Sherlock, (à la Remington Steele). That gives her the chance to solve cases without actually having clients interact with Sherlock himself.

But this necessary deception can sometimes cause problems, as with the initial reluctance of the client in The Art of the Theft:

“I am very sorry to hear of Mr. Holmes’ misfortune,” she said, her voice soft and cultured, her accent as subtle as the fragrance of a rose petal.

But Charlotte clearly heard her disappointment.

From the moment she had walked into the parlor at 18 Upper Baker Street, and had seen that she would be received by Charlotte Holmes and Charlotte alone, that disappointment had been palpable. She’d politely listened to Charlotte’s usual explanation of Sherlock Holmes’ incapacity. But whereas other clients became anxious, wondering whether the consulting detective would still be able to help them, what Charlotte read on this woman’s face was an absolute certainty that she had wasted her time.

But while Charlotte is the detective, she’s surrounded by a circle of women who are happy to lend their assistance in any way they can in her cases. Livia Holmes, Charlotte’s sister, is writing a fictional story with Sherlock Holmes as the lead. Mrs. Watson, the widow of a familiar-sounding doctor, has had quite the colorful backstory of her own and little ruffles her. Several other women are featured in The Art of the Theft as well, some as allies, some as enemies.

The series is set in the same time-frame as the original stories, so each of the women faces challenges due to the nature of the society. Charlotte’s been banned from polite society for her choices. Olivia chafes at the strictures imposed by her dysfunctional parents. Mrs. Watson used her considerable charms when younger to better herself.

But, given how society in this time period underestimates women, their gender also is an asset in detective work, especially in the complicated case of blackmail brought to them by the client who’s initially disdainful of Charlotte.

This client has past romantic connections to her good friend Mrs. Watson, so naturally Charlotte wants to help her in any way possible.

The plot features the need to obtain a certain painting, by fair means or foul, to stop the blackmailer, who seems connected to a mysterious French chateau near Paris with a dark reputation. This residence also has numerous hidden tunnels and other secrets, as any good setting in a mystery should.

In the endeavor to take possession of the painting, Charlotte will also need the help of her male friends, including her more-than-dear-friend Lord Ingram; Stephen Marbleton, Olivia’s beau who is more than he seems; and another stalwart ally who’s also a member of the British spy service.

For those who’ve been reading the series for the slow burn romance between Charlotte and Lord Ingram, there are some developments. Their scenes together certainly crackle, especially when they spar:

He taught her how to pivot after the initial parry, to avoid exposing her back to an assailant spinning around to whack at her further. Then he showed her what to do when he instead attacked her kneecaps.

“Don’t be so open about your perverted tastes,” he murmured. “Now see how I movie differently when I intend to strike low? I can’t lean back at the same time. I must lean in.”

“Can I use your own momentum against you here?” she asked. “By the way, my lord, not all of us are as good as you are at hiding perverted tastes.”

She stepped back, but not before he hit her across the kneecaps.

“And I don’t have perverted tastes. I have varied tastes.”

She raised a brow. “Is that what they call it these days? Well, then, I like how varied your tastes are.”

The climax of the book comes inside the mysterious chateau, as secrets are revealed, pertinent to the case and otherwise, and unexpected violence erupts.

In the end, some order is restored but there’s also the promise of another mystery.

About the only complaint I have with The Art of the Theft is that it might be difficult to follow initially given its large cast of characters and their relationships with each other. But the delightful cure for that, of course, is to read the first three books in the series first.

See More: Review of The Hollow of Fear by Sherry Thomas