Book Review: The Alchemist of Lost Souls by Mary Lawrence 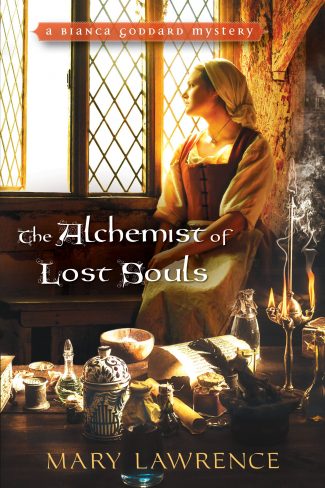 The Alchemist of Lost Souls

In Mary Lawrence’s The Alchemist of Lost Souls—the fourth book in the Bianca Goddard Mystery series—a dangerous element discovered by Bianca Goddard’s father falls into the wrong hands… leading to a chain of multiple murders.

Henry VIII rules England but, in this fourth installment of Mary Lawrence’s Bianca Goddard mysteries, the king is a distant manipulator and danger lurks far closer to home for Bianca and her husband, John.

That danger comes via her father, a struggling alchemist searching for a spectacular new chemical he created but was stolen. Her father suspects her mother, who’s hiding secrets. But soon others are caught in the quest for this magic chemical, leading to the woman who came to possess it. Unfortunately for her, she’s soon murdered. Unfortunately for Bianca’s father, his chemical is now missing.

This is the tangled web that Bianca has to unravel, all the time worrying about the possibility that her husband, John, will be conscripted by King Henry VIII’s forces to fight in either France or Scotland. Complicating that worry is Bianca’s unexpected pregnancy.

There’s a great deal happening in The Alchemist of Lost Souls, and the title could apply to any number characters. Others are driven by fear, greed, or the quest for knowledge. There’s yet another failed alchemist, a rival to Bianca’s father, a candler, an apothecary, the inspector, Patch, assigned to investigate the murder, and the frequent denizens of the Dim Dragon, the local pub frequented by most of the cast of characters.

But perhaps the character who makes the biggest impression is the Rat King, a semi-supernatural being who lurks under the bridges of London seeking his final chance at death.

The story takes the reader all over this era’s London and Southwark, allowing us to see it from multiple points of view, including a small boy, Bianca’s father, the candler, the apothecary who want the stolen chemical, Bianca’s mentor in herbals, Meddybemps, the failed alchemist, and the Rat King.

Sometimes the point of view even switches to objects:

On the opposite bank of the Thames, the marshy fields of Southwark had also noticed winter’s passing. Thriving on consistent days of warmth, the grounds beyond Paris Garden and the bull-baiting venue had erupted in a carpet of wildflowers, one more impressive than meadowsweet. By right the queen of the meadow reigned supreme in this patch of competitors. At the end of startling red stalks her delicate flowers bowed to the breeze, rippling like tatting on Katherine Parr’s sleeve. Fie on anyone who dared mention she was common. She was no dropwort, so mundane and undignified.

Bianca is at the center of this storm, though she sometimes comes across as an indifferent investigator. Mostly, she desires to keep her meddling and abusive father out of her affairs and to protect her mother, if she can.

This is a story that does not stint on the reality of Tudor London, full not of just of the sights like the meadows, but of the sounds of the Thames lapping against the bridge and shore, the cacophony of voices inside the Dim Dragon, and, yes, the smells of a population and a world that lacks a sewer system and private baths.

Bianca’s home is a particularly vivid setting, especially as she prepares her herbal remedies:

Bianca spent the morning washing their smocks and hanging them on a rope she strung across the back alley. By the time she retrieved the chopped herbs covered with oil and started a small fire in her furnace, the sun had started its downward arc. With the spring season came an increase in ague and its symptoms. It was a malady common among those inhabiting low-lying areas, where the air was thick and damp. Headaches accompanied sweats and chills. Even sleep offered no relief, for a victim’s dreams were vivid torments.

Bianca had witnessed a man’s chills lessen when given a potable septwort concoction. To soothe a bumptious stomach, she added catmint. She though the combination might be the beginning of a remedy for the malady; at least Meddybemps could dispense the syrup for some profit until she had figured out a better combination of herbs. She was fanning the dried grass in her stove when she heard a familiar voice call through the window.

The upside of the ever-changing points of view is that it exposes the readers to much of London and Southwark and into Lawrence’s meticulously recreated Tudor era. It also gives us insight into the people of the time, including their somewhat indifference to children and the middle-to-lower classes realistic and hard-headed view of marriage. This is a sometimes brutal world where people must watch out for themselves or, hopefully, find someone who cares enough to watch out for each other.

The mysterious chemical is the McGuffin that draws all these souls together, until a final climatic chase across the Thames itself, in rickety boats that residents use to taxi across the river that divides London. The Rat King plays a central part in this. He’s a fanciful creation but the London of this time was a fanciful place, a mix of growing scientific knowledge and ingrained superstition.

Through it all, Bianca operates with a determined and somewhat bold air, as she’s learned to respect her own intelligence and instincts. Still, I could wish for more of her, because the downside of the shifting points of view is that the reader doesn’t get nearly enough of time inside Bianca’s own head. She’s a terrific lead character and I’d love to read more of her own voice, rather than spend time with others.

The mystery also moves in fits and stops, creating something of a slow pace at the beginning of the tale, and meandering a bit, until the final action scene, which is riveting and has somewhat of a tragic ending. (Though, of course, Bianca herself survives, if not as fully intact as she’d like.)

If Tudor London is a place you want to go, Lawrence is an author who will take you there, with the intrepid Bianca as your guide.

Need to brush up on your history? Join author Mary Lawrence for A Tudor Primer.