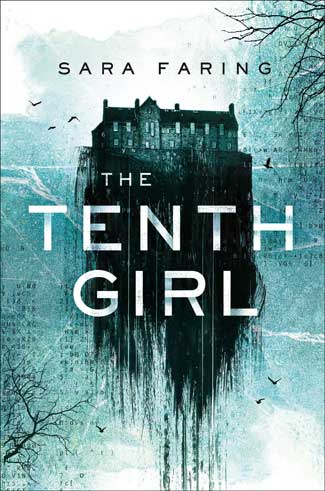 Simmering in Patagonian myth, The Tenth Girl by Sara Faring is a debut novel and a gothic psychological thriller with a haunting twist.

I’m a sucker for boarding school novels, especially ones that incorporate mystery and horror into the proceedings. So I leaped at the chance to review Sara Faring’s The Tenth Girl, which is billed as a gothic psychological thriller with a haunting twist. Bonus points for being set in and inspired by 1970s Argentinian and Patagonian myth; I love diverse settings and cultural influences. So I was all in for the tale of Mavi Quercia, an 18-year-old young woman fleeing Buenos Aires for life as a school teacher on the southern tip of the continent after her firebrand mother is taken away by the ruling military regime.

The first indication that this isn’t, however, a straightforward boarding school thriller comes in the second chapter when we’re made privy to the point of view of Angel, a lonely soul drawn to the same isolated stretch of the planet where Mavi has sought refuge. The Vaccaro School has been set up on a mountain complex where, six decades previously, all the former inhabitants died of a mysterious virus or fled despite the campus having flourished for quite a number of years until then. In 1978, the intrepid descendants of the original founders returned to reopen the school, providing a safe haven for 10 young girls and their teaching staff, Mavi included.

Well, safe insofar as a place rumored to be cursed and haunted by Others, as they’re called, can be. Legend has it that a native Zapuche shaman cursed the land in order to protect her tribe from colonizing Europeans. Alas, the curse backfired, tearing open a rift in time and space for hungry souls to prey upon the inhabitants of the Vaccaro School.

Angel is one such, perhaps. A being from the 21st century, Angel doesn’t have quite the same motivations as the rest of the Others. As the book progresses, Angel becomes more and more drawn to Mavi, finally realizing that Vaccaro School must not be left to its doom, a point of view reinforced by memories of Angel’s courageous late mother, whom Angel once told:

She laughed shakily. “You shouldn’t be saying that to me. I’m the mom.” She released my hands, covered her face, and uncovered it just as swiftly. Her eyes were burning hot as coals. “Shit, Angel. Some people just don’t get what this life is all about. We all go through our own personal hells at one point or another; we all inflict pain on others or ourselves intentionally or accidentally at one point or another; we all lose shit that we thought we couldn’t live without, but there’s still so much beauty and love and wonder to be found around every corner. How much pain do you have to be in to forget that and give in to the dark, you know?”

The way that Mavi and Angel’s lives intertwine makes for a slow-burning, decidedly creepy Gothic novel—and then you hit the 80 percent mark, and this book becomes something else entirely. I’m not going to lie, some people are going to absolutely hate and/or be confused by what happens, but I was completely blown away by the audacity of it all. Ms. Faring is a genius, and like most geniuses, her work will be polarizing.

I’m fortunate that I enjoy all genres of fiction, and I love so much when someone breaks the rules to create something new and exciting—especially when it deals with topics of identity and what it means to be alive. Thought-provoking and daring, The Tenth Girl starts out as one kind of horror novel and then, in my opinion, morphs into quite another, bolder, even more relevant tale for our ages. But it is, through and through, a book of the macabre, as when Mavi has a too-close encounter with the Others:

It’s then that I feel them. A damp gust strikes and melts into my flesh; an electrical charge trickles closely behind. I shudder with revulsion, unable to control myself. Intrusive, overwhelming, knee-weakening. A wave of icy nausea guts me. I curl over and wait for the sensation to pass. But it doesn’t. It intensifies, as does this feeling of weighty doom, humming through my upper jaw, hitting the lower like dripping acid. And strengthening behind me, exuded from the cracks in the old charcoal paint like a foul smell, are those old voices. Whispering at first, then guttural, they clash into a building screech of long, dirty nails on a chalkboard.

Ms. Faring’s writing is as evocative and thoughtful as her plotting is intricate, and I’m wildly impressed by the attention to detail throughout, both from her and from her publisher, Imprint Reads. From the cover to the copyright page (that yes, I deciphered because I’m a crypto nerd like that) to the embedded codes in the text and the hilarious use of Latin, this is a deeply satisfying book for people who enjoy literary puzzles, as Ms. Faring herself professes to do. After this dazzling, expectation-bending debut, I can’t wait to see what Ms. Faring has in store for us next.