Book Review: Tear It Down by Nick Petrie 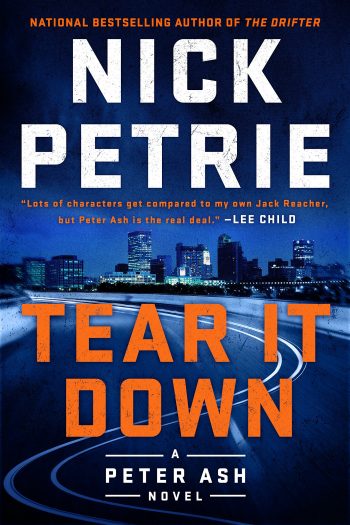 In Tear It Down, the new edge-of-your-seat adventure from national bestselling author Nick Petrie, Peter Ash pursues one case—and stumbles into another—in the City of the Blues.

Wanda Wyatt lived in an old brick house on a residential street off of Ayers in North Memphis. Her block was crowded with tall trees and shrubs, and lush, semi-wild gardens. Invasive kudzu vines smothered fences and sheds, climbed trees and garages. Some of the lots were empty, with cracked steps and driveways showing where homes had once stood. The remaining houses had seen better days, especially Wanda’s.

The back end of a dump truck was visible in her front yard.

The rest of the truck was jammed into her living room.

Installment number four is no different.

Meanwhile, just a few blocks away, someone is targeting Wanda Wyatt. What started with racist threats has now escalated to a direct attack, courtesy of a dump truck driven straight into her newly purchased house.

Wanda assumes her blackness, her homosexuality, or her work as a photojournalist has earned her an enemy. But Peter—sent by girlfriend June Cassidy to help her beleaguered friend—suspects otherwise when he learns the previous owner of the house also suffered similarly violent bad luck.

But before Peter can get digging into Wanda’s problem, he runs into Eli Bell, who’s doing his own running—from the cops and his recent bad decisions.

The kid was maybe five feet six, built like a string bean, skin so dark it seemed almost blue. He couldn’t have been more than fifteen, but his hollowed-out face looked like it had seen way too much already. He wore a black Fender guitar T-shirt, dirty knee-length denim shorts, and enormous no-name sneakers with a ragged hole above the left big toe.

His T-shirt was soaked at his chest and shoulders, the slender collarbones showing through the thin fabric. He was a good-looking kid, but his face shone with sweat and something else, something darker. Like he was seeing ghosts.

In his right hand, the kid held a black plastic trash bag by its bunched-up neck. His left hand was tucked into his back pocket, out of sight.

He looked the truck up and down. The shining green paint, the mahogany cargo box built onto the back. “How’s it drive?”

“It’s a little slow to get going,” said Peter. “It definitely doesn’t corner very well. But once you get it up to speed, it’ll go seventy-five pretty much forever. I’m Peter, by the way. What’s your name?”

The pump handle clicked, the tank full. Peter turned, put the nozzle back in its socket, and took his gas cap off the top of the pump. When he turned back to the truck, the kid had taken his left hand out of his back pocket and pointed a snub-nosed revolver loosely at Peter’s chest.

Lewis, as usual, had been right about finding a gun.

In some neighborhoods, it was just a matter of time.

Despite being car-jacked by the kid, Peter’s intrigued by Eli, a homeless musician who’s gotten in way over his head with the local drug lord. He sees something worth saving in the boy, especially when he sees how smart he is, and how good he is with a guitar rather than a gun in his hands.

Because things can never be simple with Peter Ash: he now has two people to save in the war zones of Memphis. And neither Wanda—haunted by something that happened in Syria, hopped up to the gills on painkillers and booze—nor Eli—who sees no reason to trust this strange white man—will make things any easier for him.

In just a couple of days, Peter finds himself beset by gun-toting gangsters on one side and a tattooed, bomb-wielding white supremacist on the other as the Tennessee town goes all to hell.

The vests were heavy, loaded with spare magazines for their weapons. Despite that weight, despite pistols strapped to their sides and long guns held one-handed and balanced, the two men ran easily, as if they could run forever. The way marauding night-fighters had run for millennia, with bone clubs or fire-hardened spears or long swords or flintlocks or Kalashnikovs in the vast and varied wastes of the world. Peter knew what he’d been training for all winter in the little teardrop-shaped valley. To be right here, right now, with Lewis.

To be of use. To attack and defend. To do whatever needed to be done.

Regardless of the cost.

Boy, there’s just so much to enjoy in a Peter Ash novel.

For starters, there’s the action: always so cinematic and often times a little larger than life—and yet somehow still grounded enough in the characters and setting to be believable.

Even when there are bombs going off in Memphis, even when someone’s firing a military-grade machine gun at a Civil War-era house on a residential street, it all feels real and weighty. Petrie has a knack for adding realism to incredible moments, and leaves you gasping in surprise or excitement rather than scoffing with disbelief.

Then you’ve got the supporting cast. Old favorite Lewis returns and is delightful as always, the most dangerous man in the world (as he likes to say): a black man with a library card. June’s as loving, protective, and foul-mouthed as ever. Wanda is prickly but sympathetic, Eli tragic and heart-tugging.

There are sixty-something bluesmen who work construction by day, a black detective who sounds just like Elvis, the near-crippled hog butcher turned unwilling accomplice to his mad brother, and a teenaged granddaughter who sees more than most with a simple touch.

Petrie has a knack for adding realism to incredible moments, and leaves you gasping in surprise or excitement rather than scoffing with disbelief.

Everyone’s well-rounded and extremely colorful, even the nasty characters—part of the fun is in how complex and vivid the baddies are in a Peter Ash story. He has some badass, skilled, fantastic allies, yes, but he goes up against some equally great heavies, too. Petrie clearly holds by the maxim that a hero is only as interesting as his villain, and it always makes Peter’s triumphs more satisfying when he takes down a seriously bad dude.

Then there’s the societal commentary, which adds a nice depth to the surface fun and action. Previous entries in the series had plenty to say about post-traumatic stress, the poor treatment of veterans, government greed—Tear It Down focuses on racial and class divides, the brutality of life in a city wracked with poverty and drugs, and the bleak truths of what it takes to survive even in “civilized” America, especially if you’re black and poor.

“Stevie’s just a lookout, watching for police or cars loaded up with a rival clique. They’ll have young boys like him posted two or three blocks out, all the way around, somewhere between six to ten kids at a time, depending on the streets. Usually four shifts, six hours each.”

“Yeah, younger than most for that job. Especially for this shift. He’s either somebody’s relation or he’s pretty smart. This is entry-level, pays a couple dollars an hour. Maybe he’s helping to feed his family, maybe he’s on his own and he’s feeding himself. The first step on the ladder.”

Peter watched Stevie standing under the tree, tuned in to the walkie-talkie. “There’s no other ladder to climb?”

Wanda shook her head. “There are other ladders, but they’re damn steep, and that first rung is damn hard to reach,” she said. “I know these folks. Schools are lousy, families are fractured, most people are dirt-poor. A lot of these corner boys, they don’t have anybody who really cares about them. They find their community on the streets. If they can earn money in that community, it seems like a good decision. The fact that they might die doing the work, well, that’s part of the deal. They might die anyway.”

What keeps me coming back so eagerly, though, more than anything else, is the rangy, shaggy-haired Peter himself: the competent badass Wanda describes as “Picasso’s Don Quixote.”

Unlike so many other action heroes, Peter isn’t a macho fantasy. He isn’t built like Rambo. He doesn’t bed every woman he meets. He doesn’t have a pithy one-liner poised to drop the moment he kills a guy. He’s not a jingoistic military man perpetually gung ho for the Stars and Stripes.

No, he’s a wounded veteran who knows he’s wounded. He doesn’t kill unless he absolutely has to, and he’s constantly giving seriously dangerous dudes—and ladies—second chances. He’s a guy who wants to help a troubled kid rather than kick the snot out of him, even after said kid steals the lovingly restored truck that’s essentially his sole possession/real home. He’s devoted to his girlfriend June. He bleeds and cries and feels guilt.

More than anything, Peter Ash is kind—which is just so damn refreshing to find in a male protagonist. The action genre as a whole would be better with more of Peter’s ilk: characters who prove you can live to help and protect others and still be a gun-carrying badass. Who can rack up an impressive kill count and yet still grieve for the innocent bystanders caught in the crossfire.

When Peter puts someone down, you know the person needed to be put down. That it was the right thing to do, not just the cool thing to do. He’s a dependable, trustworthy, nice guy who would rather cook Mexican food for his girlfriend and go on a strenuous hike in the woods—but is absolutely willing and able to fight a Neo Nazi with his bare hands or shoot a gangster to save a kid. He’s an adrenaline junkie who gets his fix by saving people, which is why I love him so much.

Petrie has yet to disappoint in any way, and Tear It Down proves he’s only getting better the more he writes. Here’s to seeing much, much more of Peter Ash in the coming years—long may he kick wholesale ass.