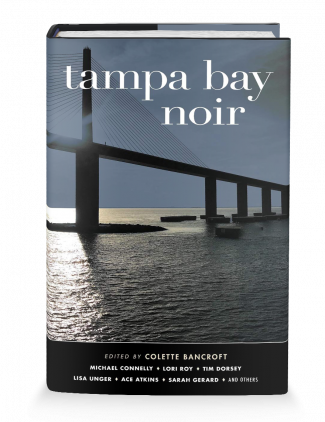 Akashic Books, who has produced dozens of Noir novels in this series since 2004, had the misfortune of having their latest one — Tampa Bay Noir —scheduled for release during the pandemic lockdown. Post-lockdown it has begun to find an audience and I can only hope that my review will assist in that effort. I was first made aware of this edition by author Lisa Unger, who I correspond with, as she is a resident of the Tampa area, as well as a contributor to the collection.

As a lifelong New Yorker, I made the move to Central Florida a little over five years ago. It did not take long to see behind the curtain of ‘the Sunshine State’ and expose some of the dark underbelly that exists there. Films like The Florida Project did a great job of doing this. Now, a team of crime writers has focused on the Tampa Bay region to show the criminal element that shares the area with great beaches, sports venues, and tourist attractions. It should be no surprise considering that this territory holds an annual parade and giant party in honor of the pirates who once raided the area — the infamous Gasparilla fest named after the pirate captain Jose Gaspar who led a legion of buccaneers to Tampa Bay in the name of theft, debauchery, and violence. Whether Gaspar was fictional or not makes no difference to the tens of thousands of revelers who participate in their own form of debauchery in his name each year.

Tampa Bay Noir does a great job of showing off some of the best crime writers in the business along with many local talents as they highlight different areas and subject matters to display the ‘Crime Noir’ side of Tampa Bay. Rather than going through each short story, I will list some of the standouts for me:

The Guardian by Michael Connelly

This is the only story that features a famous fictional character easily recognizable to all crime and thriller fans — the great Detective Harry Bosch. The question is what is an LAPD Officer doing in Tampa Bay? Well, he was called in by an old friend, Jasmine Corian, who believes that a famous piece of artwork of hers was stolen off her living room wall. The local PD are dragging their feet so it will take Bosch and a map of the area to get things moving in this burglary case. I have noticed that there is little sense of urgency in Florida, especially in comparison to places like NYC — and wish I had someone like Harry Bosch to intervene for me at times!

Chum In the Water by Lori Roy

Set in the Tampa Bay suburb of Tierra Verde we step into the areas only real tavern. This tavern also allows us to share time with local smugglers and modern-day pirates. The principle character is known simply as ‘Chum’, a member of the infamous organized crime family the Giordano’s. The Giordano’s run organized crime in the Tampa Bay area but that protection only goes so far as Chum will soon discover when he gets involved in a bad deal with some really, really bad people.

Only You by Lisa Unger

Lisa Unger gives us a story set along one of the top-rated beaches in the country — Clearwater Beach. Our main character is a wannabe player named Scottie, who mingles amidst the areas rich-and-famous. Scottie is planning to build the largest mansion in the area and to get the funds to do so will put him in league with some difficult players who will want their investment back, plus interest, in an unreasonably quick time period. As abrasive and foolish as Scottie can be, you cannot help but feel for him right up to the bitter end.

My favorite tale in the collection fell under the Grafters’ Paradise section. I’m always a sucker for a good con man story and this one is great. Debbie Lyn falls instantly for the charismatic older gentlemen — his name doesn’t matter. He looks charming and rich and talks of his time as a Hollywood producer as well as the mansion he is redecorating and his boat. Debbie Lyn is warned by several locals that the man is not what he claims to be, but she will just have to find this out for herself. The ending was not predictable and Atkins actually was able to elicit some sympathy for the grifter.

Overall, an above-average collection of Crime stories that will make me seek out some of the others in the Akashic Noir Series.