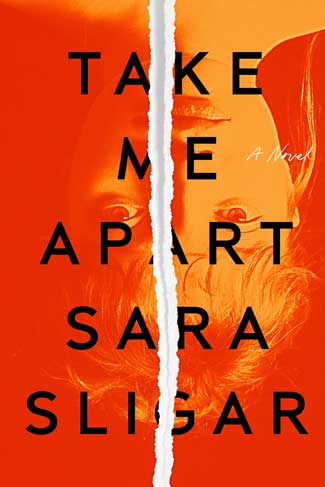 Take Me Apart by Sara Sligar is a spellbinding debut novel of psychological suspense and a chilling, thought-provoking take on art, illness, and power that follows a young archivist’s obsession with her subject’s mysterious death as it threatens to destroy her fragile grasp on sanity.

Sara Sligar’s Take Me Apart is a fascinating narrative that seamlessly blends together the lives of various characters while simultaneously shifting between past and present. A violent, sharp, understanding exploration of mental illness exacerbated by abuse and postpartum depression, this outstanding debut delves deep into the tortured mind of a creative genius after her death and the shattered present of a young woman learning to cope with injustice while rebuilding her life.

Miranda Brand was a superstar photographer who struggled with a plethora of demons her whole life and then died mysteriously at the height of her career, leaving behind a husband who was also an artist and a young son. However, there was much more to her life, including abuse, crippling depression, a battle with postpartum mania she never overcame, and a relationship with her son that never coalesced into anything normal or healthy because her art, and that of her husband, always came first.

Decades after Miranda’s death, her son, Theo, moves into his mother’s house in Callinas, California, for the summer and hires Kate Aitken, an ex-journalist still reeling from an ugly end to her previous job, to look through his mother’s papers and personal effects so it can all be auctioned off. Kate digs into the mountains of papers, interviews, letters, photos, and even receipts Miranda—a bit of a hoarder—left behind. Everything she discovers makes Miranda’s mysteriousness grow in her mind. Did she really kill herself? What role did her son play in her death?

Navigating her papers is hard, and the many rumors surrounding her death make it even harder. Kate becomes obsessed with piecing Miranda’s life together to understand everything and find answers to every question she has. But Kate has a lot of secrets of her own, and her relationship with Theo takes a wild turn that could either help her get better or will further damage her mental health.

Take Me Apart is dark and poetic. The atmosphere Sligar builds in the house where Kate works is superb, and the way Miranda’s papers are incorporated into the narrative is outstanding because they allow the dead artists to become main characters and offer readers a look into a life that neither Kate nor Theo know about. These words, many of them coming straight from Miranda, are packed with strangeness and show a mind dealing with things no one can see.

“I’m living in white feathers and lizard eyes and dark sludge that pushes up through my throat. When I close my eyes I can feel my blood pouring under the surface of the skin. Where does it all go? If I spill it, I will be lighter, I think. So light I can flight.”

While this is a psychological thriller, it goes above and beyond to present mental health issues in a way that doesn’t shy from the darkest elements of it. Miranda is truly a tortured individual. Her sanity comes and goes, and the time she spends in a psychiatric hospital is a violent ghost that not only haunts her for the rest of her life but also haunts every page in Sligar’s narrative.

Perhaps the most impressive thing a novel can achieve is making readers feel uncomfortable, like they are standing on unstable ground. That is certainly harder than making them feel sadness or lust. In Take Me Apart, Sligar manages to make readers feel uncomfortable many times, which makes this a brave novel that demands to be read. Miranda is full of darkness, and there is no silly attempt at making her immediately likable, no effort to redeem her after each crushing appearance. Instead, readers get a strong, brilliant, flawed woman that is a truly memorable character whose haunting voice permeates the narrative.

“So I pretended I was going outside for a smoke and instead I walked to Nangussett, which was only ten blocks away. I started feeling so far away from the baby, and I thought about how I should have taken him with me. Only if I had brought him I would have had to bring so much fucking shit, the pacifier and the toy and the baby jacket and the stroller and the diapers, and then I was thinking this was my whole life now, I will never not have this baby, I will never not have to walk under the burden of endless plastic shit. This is the last time I will leave the house alone. Should I have brought him? Half of me thought he would be safer with me. Half of me thought if I picked him up again I might crush his little skull into the ground.”

There are two levels to Take Me Apart. The first is the one Kate and Theo inhabit. It feels fast and immediate, real and relatable. The second is Miranda’s reality, which readers experience mostly through her own words. This level is dark, but it’s also packed with poetry. Sligar understands words can be used beautifully to show awful things, and Miranda’s diary entries are morsels of poetry dipped in pain and sprinkled with the promise of blood.

“My mind is a castle, a ruined one. Rusty suits of armor. Dungeons with faulty locks. In the dark, a slithering noise. My horrors never stay locked away for long. Every time I round a corner, they resurface, an eye watching me from a shadow. A gleam of mucus. Sometimes I turn a light on too fast, and there it is, skittering back into darkness too slowly, the light reflecting off its brown carapace.”

Take Me Apart is an outstanding debut that will satisfy fans of crime novels, thrillers, and mysteries as well as those who simply enjoy engaging stories with great writing. Sligar is an exciting new voice, and this novel will make anyone who reads it add her name to the list of authors whose next book they eagerly await.