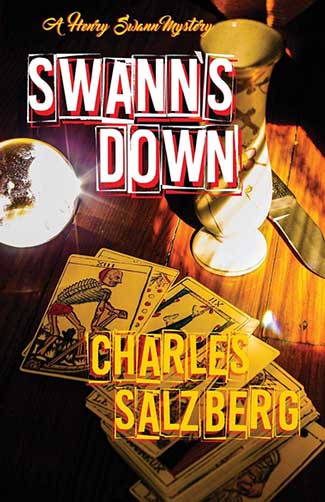 Swann’s Down by Charles Salzberg is the fifth book in the Henry Swann Mystery series.

Charles Salzberg is living proof that those who teach also do. A Big Apple native, he teaches at the Writer’s Voice and the New York Writers Workshop, which he co-founded. His novels include the Henry Swann series (the Shamus Award-nominated Swann’s Last Song, Swann Dives In, Swann’s Lake of Despair, and Swann’s Way Out) and two standalones—Devil in the Hole, which was chosen as a Best Crime Novel of 2013 by Suspense Magazine, and Second Story Man (2018), which won the Beverly Hills Book Award. Additionally, he is one of three contributing authors to Triple Shot and Three Strikes. Salzberg’s newest, Swann’s Down, is the series’ fifth (and possibly final) book.

As the story opens, readers find Swann—a Shakespeare quoting people finder who eschews the title private investigator—being propositioned by his mysterious partner, Goldblatt. Despite reservations about not being paid for the prospective work, Swann is intrigued to learn that Goldblatt’s been married before—and that one of his exes, Rachel, was recently swindled out of a substantial amount of money (some $75k) by a local psychic. “Miss Sofia,” who promised to put Rachel in contact with her recently deceased boyfriend, has conveniently gone missing along with the bereaved woman’s financial trust. Needless to say, Goldblatt wants Swann to find Miss Sofia and somehow convince her to make restitution, given how difficult it is for authorities to make a case for intentional fraud in such circumstances let alone prove it to a jury.

While trying to conjure up an audience with the elusive Miss Sofia, Swann is also approached by his former employer, defense attorney Paul Rudder, to run down a missing witness who may be able to alibi his client, hitman Nicky Diamond; Diamond—who’s left a trail of bodies in his wake but no incriminating evidence—has been charged with a murder he claims he didn’t commit. And while Swann wouldn’t mind seeing him sent away for it (regardless of actual guilt), he seldom turns down a money-making gig.

Consequently, he finds himself trekking to a small beach town across the bay from Mobile, Alabama, where Diamond’s girlfriend, the reticent Jana Monroe, has been laying low. When he confronts her, she claims that her life has been threatened. And as curious as Swann may be as to the whos and whys, his singular task is to deliver her safely to Rudder. But can he stop there?

The entirety of the story is told through Swann’s first-person narration. Whatever limitations this perspective presents are negated by his keen insights, shrewd observations, and wry humor; further, Swann’s near-constant philosophizing reveals the depths of his character. And while the cases themselves are compelling, if not overly complex, it’s the interactions they necessitate—his comical banter with the exasperating-but-surprisingly resourceful Goldblatt, his brazen repartee with Nicky Diamond, and his flirtatious bravado with Miss Sofia (and, to a lesser degree, Jana Monroe) among them—that reveal the true genius of the author’s work. Indeed, Swann’s own sense of internal conflict reveals a compunctious nature that might otherwise seem at odds with appearances.

Charles Salzberg’s storytelling is both engaging and cerebral. Swann’s Down, then, is a lighthearted romp with subtext that’s subtle-yet-serious—and seriously satisfying. Loyal readers will take pleasure in getting to know Swann better with this latest (and hopefully not last) installment, while newcomers will find themselves wanting to. After all, Swann may be down, but he’s never out.