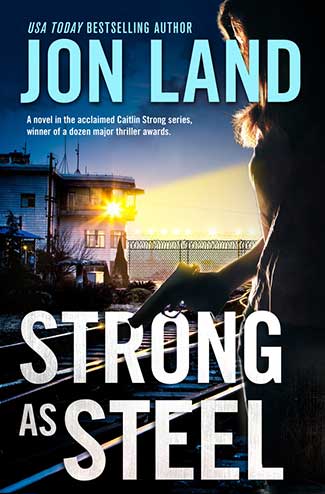 USA Today bestselling author Jon Land is one of the most consistent, and consistently innovative, writers working in the thriller genre today. He’s amassed a backlist of more than forty titles and written across both fiction and non-fiction, his propulsive prose proving to be the unifying force. While Land recently took over the venerable Murder, She Wrote television tie-in series from the late, great Donald Bain, he also continues to helm the award-winning, critically acclaimed Caitlin Strong saga; that series celebrates its tenth entry with Strong as Steel.

In true Land style, the book opens in the past—Turkey, 1959; Mexico City, 1964; and Texas, 1994; each with a body count, many of the deaths inexplicable—before quickly rocketing into the present, setting a collision course that will put fifth-generation Texas Ranger Caitlin Strong on a precarious path that her father and grandfather traveled before her. What begins as a seemingly innocuous task—serving a warrant on a private intelligence company, Communications Technology Providers, in conjunction with the Texas Criminal Investigations Division—ends in a deadly gunfight. Following that massacre, Caitlin is alerted to the discovery of skeletal remains near an excavation site; these events are not unrelated, and she soon finds herself on the trail of the same mysterious (and mysteriously deadly) cargo that her father tracked twenty-five years before.

Meanwhile, Caitlin’s partner, Cort Wesley Masters, is in Caracas, Venezuela, where he is tasked with helping their mutual friend, reformed killer Guillermo Paz, escape authorities who’ve taken him into custody and sentenced him to death for old crimes. It’s during the ensuing melee that he feels his right arm cramp up and must work his weapon one-handed; when this condition fails to improve upon his return to Texas, a visit to the clinic brings a diagnosis that renders Cort Wesley uncharacteristically vulnerable. The second point of vulnerability is his children, who he’s raised (with help from Caitlin) since their mother was gunned down in their doorway; while his youngest is overseas, his eldest, Dylan, is recovering at home after a series of traumatic events. When a new woman—the enigmatic Selina Escalante—rocks Dylan’s world, Cort Wesley and Caitlin can’t help seeing red flags. But sometimes kids have to learn for themselves.

As Caitlin and Cort Wesley endeavor to track down the bones that were unearthed on their home soil, they find themselves at the epicenter of a conspiracy involving enemies unknown, and with interference from Homeland Security and the Centers for Disease Control and Protection; not only are the remains reputed to be historically significant, but they may just carry the potential to kill upon contact and with 100% effectiveness. Despite discouragement from the higher-ups (who are wary of “Hurricane Caitlin” and her freewheeling tendencies), Caitlin forms a tenuous alliance with Luna Diaz Delgado (“the Red Widow”), Mexico City’s infamous avenging assassin; beyond having an alleged history with the cargo in question, Delgado also partnered with Caitlin’s father, Jim Strong, on a previous mission to keep it from falling into the wrong hands.

The narrative unfolds with an urgency that mirrors the plot’s propulsion, and Land alternates perspectives and settings liberally, granting each character their own arc without sacrificing connectivity or continuity. Consequently, there’s both great risk and opportunities for growth, whether emotional, physical, and/or spiritual. The epic endgame is telegraphed beautifully, and finds Caitlin, Cort Wesley, and Paz united in purpose and place against a common enemy—and one that marks a departure from those typified in recent entries; the overall result is fresh yet familiar. It’s a fitting finale and one that wraps in the themes of family, faith, and fidelity that serve as the story’s underpinning.

Strong as Steel, then, is an action-packed and impressively ambitious addition to the author’s oeuvre—and one that showcases Caitlin Strong in all her badassery. But behind the hardness is a heart as big as her handgun, and that’s never been more apparent than it is here. Kudos to Jon Land, who has marked a decade of distinction with one of his most accomplished novels to date.