February 10, 2022
String Follow by Simon Jacobs is a darkly comic suburban Gothic about a malevolent force that targets a group of Ohio misfits, harnessing their angst for its sinister designs. Doreen Sheridan reviews. 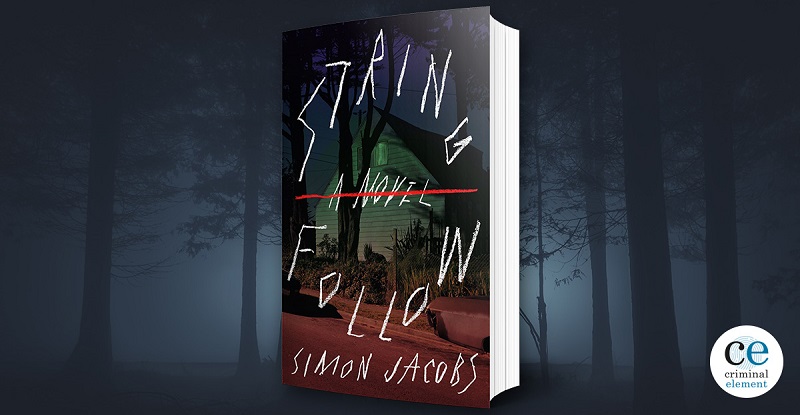 In the quiet Ohio suburb of Adena, a strange force lurks on the fringes of the lives of local teenagers. These teens are alienated souls, failed, for the most part, by bad parenting and the lack of a strong moral core. The force flits from teen to teen, looking to be a catalyst for malevolence or at least guilt, taking advantage of mental illness to sink its hooks more insidiously into the vulnerable and alone. Its voice speaks out in words of insight, even as its motives for influencing its victims remain opaque:

Not everyone had it in them, the ability to look at these choices and see their architecture, the brutal structure behind them, as dense and complex and orderly as a blood spray. But some of them did[.]

The “them” in this book are a loose network of kids who attend Adena High School. The closest thing we have to a heroine is empathetic and popular Sarah, the most level-headed of the bunch but also, perhaps, the most naive. She just broke up with David, whose efforts to get her back are rooted less in love than in revenge. David’s efforts are somewhat hampered by Sarah’s growing closeness to her best friend’s older brother Greg. Beth, her best friend, would likely feel alienated by this rapport if she weren’t herself busy faking sick from school in order to hide the real illness gnawing away at her insides.

Meanwhile, neglected, dissociative Tyler has snuck into David’s basement and is quietly living there—unbeknownst to David or to David’s absentee mom. Their friend Collin is grieving the suicide of his sister and finds himself drawn to a mysterious group of people meeting in a VFW hall out in the middle of nowhere. As these kids search for meaning, often hiding behind a smokescreen of weed or a hard shell of (often pretend) violence and sex, the force begins to work on them. It seeks to exploit their weaknesses in order to bring actual violence and harm into the world, culminating in one apocalyptic night that will change their lives forever.

In many ways, the force described within these pages reads like a metaphor for the irrational impulses of adolescence, guided by emotion and drama instead of reflection and vulnerability. As an entity, it’s never really explained in the novel. However, the book does dive deeply into the psyche of midwestern America’s disaffected youth, as here with Claire, a wealthy teenager from a neighboring suburb who’s desperately searching for her authentic self:

She felt she lived her life in different modes: the school one, the outside-school one, the punk one, the online one, the alone one, the parents one, the rich one. They existed separately, these modes, but often several layered atop each other, like layers of a transparency, while others could never overlap. She thought others must have them, too.

Fueled by a punk rock aesthetic that aims for humor but in the process exposes its own wounded heart, String Follow is a book that endeavors to externalize the chaos of adolescence and perhaps bring meaning to the epidemic of violence that’s racked American high schools these last few decades. There’s a 1980s sensibility to the splatterpunk goings-on that’s tempered by a more 21st-century empathy, making for a modern horror novel that will appeal to anyone who still vividly remembers the scars of adolescence and the almost cultish search for meaning that can linger long into adulthood.

And for all the book’s blood and carnage, a spark of hope does remain in its final pages. Not all of the teenagers described here will survive once the force is through with them, but perhaps enough of them will be able to find their way back to friendship and kindness, eschewing nihilism for a brighter path, in a tentatively optimistic reflection of today’s actual youth.