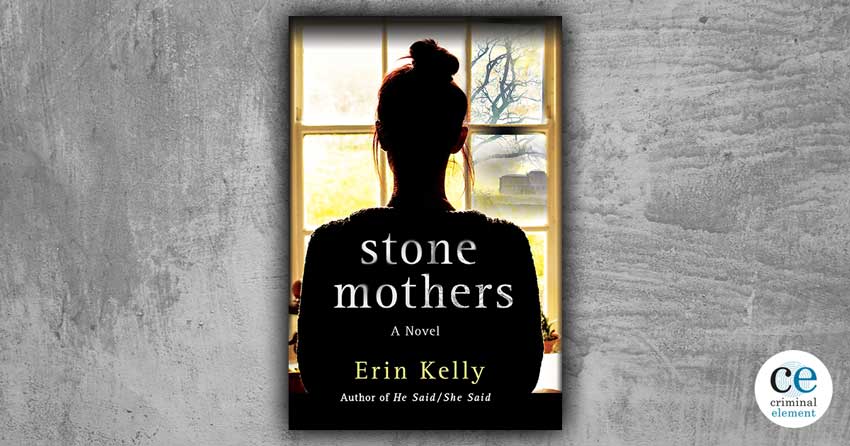 Stone Mothers by Erin Kelly, the masterful author of He Said/She Said, is an intense, irresistible novel of psychological suspense.

“The Victorians used to call their mental hospitals stone mothers,” I say, to distract Sam, whose only interest outside his family is architecture. “They had such faith in architecture back then that they thought the design of the building could literally nurse the sick back to health. I mean, I know that’s what you do, too, but they were working on poor psychology from the start. … It was a complete philosophy, you know; nothing about the way they’re built is an accident—the segregation and all the bathrooms to literally wash away your madness. Really, they were obsolete within years of opening.”

“And yet it took nearly another, what, ninety years to shut them all down.” Sam speaks lightly: the closing of the hospitals is a footnote in history for him, not a pivot. “I never realized thingamummybob was behind it. You know, that hectoring MP with the space-age hairstyle…” He looks at me expectantly, apparently blind to the blood that’s flooded to my cheeks and pounds there. “Looks like a shark in lipstick. What is her name?”

“Helen Greenlaw.” I get the name out, say it like it’s nothing. Sam’s description is spot-on, although it’s not her mouth I recall but her eyes, bright Tory blue with a disfigurement in the right iris, a dash of navy pigment, as though the border of the pupil had been breached by a hook and the darkness tugged out…

Marianne Thackery thought she’d put the Nazareth Mental Hospital—and what happened there—behind her. She moved to London, married a predictable man, raised her daughter, Honor, and became a lecturer on the history of architecture.

But then, predictable, reliable Sam surprises her with a new apartment close enough to her childhood village to allow her to help her sister care for their dying mother.

An apartment inside the newly renovated Nazareth Mental Hospital.

And, almost immediately, Marianne realizes some secrets are harder to keep than others.

I am seventeen again, in the echoing wards. Words going up in flame, lives reduced to tick sheets and doctors’ rounds. Keys turning in locks. Smashed glass and running. The things that define me fall away; mother, wife, my work. The title in front of my name and the letters after it erase themselves, and I am made of my past. The thought of re-entry feels like—the comparison makes itself before I can help it—an electric shock.

Stone Mothers is Marianne’s story, about a woman who made mistakes and dangerous choices in her youth in order to survive. A woman willing to do almost anything to keep those events buried for the sake of her mentally ill daughter, lest the truth drive Honor to another suicide attempt.

And it’s Helen Greenlaw’s story, about a woman punished for her independent nature and intelligence and ambition. A woman whose cardinal sins of self-reliance and individuality saw her committed against her will. A woman who survived abuse and imprisonment by choosing the lesser of two evils and then, later, choosing silence over exposure, murder over confession.

Finally, it’s Honor’s story, of a daughter learning just how far a devoted mother will go to protect her—and deciding whether the bloody, painful past should remain buried or finally uncovered for all the world to see.

The suspicion of a lie had her reaching for the razor; the truth could, literally, kill her. And so I protect her at twenty, just as—more so—than I did at two, ten, twelve.

The world is full of sharp objects, and pain and secrets run red and blue under soft thin skin.

Erin Kelly has delivered another multi-tiered knockout with Stone Mothers. The narrative shifts confidently between perspectives and time periods, from 2018 to the 1980s, the ‘50s, and the ‘60s, weaving flashbacks and slices of life with sharp, eloquent precision.

The women we follow are vastly different, fully-formed, and real. We feel deeply for each of them in their pain, fear, and horror. Nobody is wholly victim or monster, and the lines between guilt and mental illness are often murky.

This is as much a story of how society shapes and punishes women as how women are driven to extremes to protect their children and themselves. And how different the relationships between mothers and children can be—from aloof and distant to passionately involved. The central concept of motherhood looms almost as high as the ominous, gothic Nazareth Hospital, and at times, it can be just as forbidding or destructive.

As always, Kelly’s prose is emotionally resonant and cinematically descriptive. So many of her turns of phrase are imbued with the haunting weight of an elegy, the sense that a ghost or scene of disturbing madness lurks around the next corner. She never shies away from the genuine horror inherent to the situations her characters are thrust into or the choices they choose to make, yet she never sacrifices poetry for shock value or caricature.

And while there is plenty of history underpinning Stone Mothers, this is a story propelled by its characters rather than by research. It never loses its focus on the women at its heart. Much more than a mere murder or blackmail novel, it asks the question: “What makes a woman mad?”

Perhaps the answer is subjective and depends upon who you ask. What’s madness to some may be self-defense or maternal love to another.