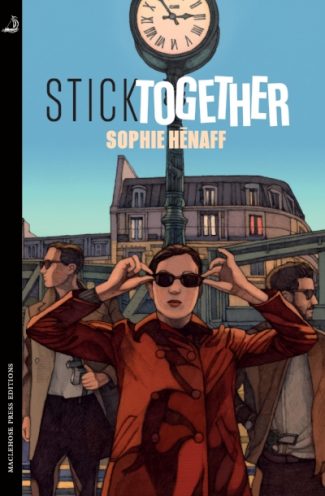 In Sophie Hénaff’s Stick Together, Anne Capestan is back with her squad of misfits. But with their status in trouble and a hopeless murder to solve, team morale is running low.

I adored Sophie Hénaff’s debut novel, The Awkward Squad, a droll police procedural centered on a group of cast-offs that the national police could not fire but hoped would quit if put together in a dead end bureau. Headed by the trigger-happy but otherwise capable Commissaire Anne Capestan, this special department was assigned the thankless task of going through years of cold case files, with the patronizing remit to find something useful to do. Politically speaking, it allowed Capestan’s boss, the wily Directeur Buron, to keep the case-solving record of the rest of the police spotless, while Capestan’s squad was given all of the dregs and subsequent blame.

Almost to their own surprise, the misfit group of police officers not only closed three murders in their first outing but also exposed corruption in the highest levels of the national police. That last gave the rest of the police force little reason to warm to them, however, so Capestan’s squad finds themselves, as Stick Together opens, again on the outs with the rest of their co-workers. So it’s something of a surprise when Capestan is called in to a crime scene. Apparently, a fellow commissaire has been brutally murdered, and the various departments are racing to solve the crime. At first, Capestan figures that Buron has called her in because of another possible case of corruption, but then she sees the victim for herself. The dead man is the father of her ex-husband, and she’s given the task of breaking the news.

What follows is a highly entertaining police procedural that balances pathos with hilarity, as Capestan and her squad connect the murder to a series of other grimly heralded killings. A lot of the humor comes from the members of the squad itself, who are here due to peccadilloes that have meant their removal from “normal” precincts. One of their newest members, Henri Saint-Lô, believes that he is a musketeer from the 17th century who has miraculously lived through the ages. Not a single minute of the compulsory psychiatric treatment he’s had to undergo has changed his mind, and so he’s been assigned to Capestan’s outfit, where he has a run-in with their resident cyber crime expert. Dax is a brilliant hacker who is, unfortunately, a little slow on the uptake in other areas of his life, due to one too many blows to the head from his boxing habit:

The day before, Dax, with his customary tact, had pointed out to Saint-Lô that he was unusually short for an ex-musketeer. Saint-Lô took great offence, telling the “lieutenant” that he could hardly have visited many medieval villages, and that if he wanted to base his views on the proportions of men from centuries past against Disney movies, then he had only himself to blame. Not to mention the fact that many illustrious characters throughout history have proved, if proof were needed, that there is no link between size and vigour. Thereafter, he had thrown his glove into the face of a quite baffled Dax, demanding a duel. The lieutenant picked up the glove and declared in all seriousness:

“I don’t think this needs any jewels, it’s perfectly nice as it is. If you insist, though, I’m sure we can find something in Les Halles?”

Dax’s innocence had completely disarmed Saint-Lô, who was unable to come up with a fitting response.

And that’s part of the charm of The Awkward Squad, that their status as pariahs allows them to accept one another, faults and all, as they strive to bring criminals to justice. Under Capestan’s deft leadership, her officers are allowed to play to their strengths, outwitting conventional counterparts who look down on them for being weird or annoying, as if those qualities somehow disqualify them from being able to do their jobs otherwise.

Ms. Hénaff also does a spectacular job of shining a spotlight on France itself, from its customs to geography to political issues. Another character introduced in Stick Together is Lieutenant Basile Diament, a mixed race Parisian whose pride in joining the national police force has been marred by disturbing incidents involving his co-workers. Assigned upon graduation to the border guard, he tried his best to follow the rules and orders, denying entry to asylum-seekers with forged papers:

Diament did not go in for politics. He had no opinions and knew that decisions were made on high because the people at the top were aware of the bigger picture. Diament just said no. But he often got the feeling that he was the only person not to derive pleasure from it.

At times, the young policeman wondered whether his skin colour had played a part in this posting. Whether it might have been deemed the safest way to judge how far his loyalty stretched. Whether the powers-that-be were afraid that his half-caste status inevitably made him into a brother, an accomplice, as if gangs formed with the help of a Pantone colour chart. In his team, there were a couple of second-generation guys of North African origin. Were they going through some kind of initiation ceremony too? That said, the police now recruited from a far wider range of backgrounds. Things had changed.

Some things. Perhaps not his white working-class pals.

Stick Together builds upon the terrific foundation of its predecessor to present a truly engaging contemporary crime novel that will move you as much as make you laugh. Honestly, I think it’s even better than the first book in the series and am very eager for more of Ms. Hénaff’s work to be translated into English, as this volume was by the very able Sam Gordon. Her third novel has just come out in French but my command of the language is even more awkward than her cops are, so I’ll just have to impatiently wait.