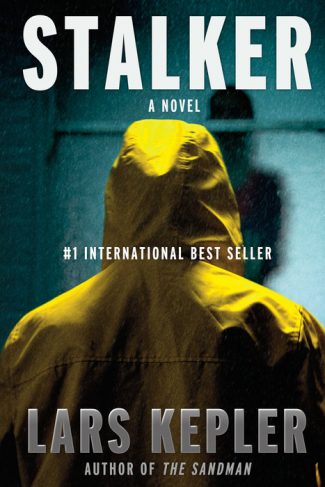 Stalker by Lars Kepler is the fifth book in the chilling Joona Linna series set among the Swedish National Crime Unit.

Lars Kepler’s Stalker is hard to classify. The novel is a crime narrative, but it contains elements of mystery, police procedural, adventure, psychological thriller, and even a bit of classic noir. Furthermore, its length (560 pages) make it considerably longer than most contemporary novels in the genre and allows Kepler to develop a few intertwined narratives simultaneously while also offering readers a look at what went on before the events in the novel.

In Stalker, someone sends the Swedish National Crime Unit a short video featuring a young woman in her home. The video was obviously shot from outside the house, and the woman appears to be oblivious to the fact that she’s being watched. The footage is unsettling, but not exactly what the unit is used to. That changes soon after they watch the video: someone finds the woman’s body. She was found where the footage showed her, and she was horrifically mutilated and viciously attacked both before and after her death. The video thus becomes evidence, and detectives study every frame of it. Then a second video arrives, this one showing something similar to the first. The similarity immediately makes the authorities think they are dealing with a serial killer who is playing with them, letting them know who the next victim is but not giving them any information that could help save her. Detective Margot Silverman, who is pregnant, is given the case, and one of the first things she does is ask Detective Joona Linna for help, and Linna brings in Erik Maria Bark, a renowned hypnotist who has helped Linna in previous cases. The trio tries to get to the person behind the videos, knowing that with each new video, a life will be lost and they can’t do anything to prevent it. As the tension builds and the detectives dig into the past, one of Bark’s secrets comes back to haunt him. He put a man in a mental institution years before for a similar crime, but the new crimes start to make him think that was a big mistake and he placed the wrong man away. What follows is a sprawling, edgy narrative about the price of desire and the way secrets have a tendency to stick around and come back to light.

This is one of those rare books that make writing a synopsis almost impossible. There are too many tangled storylines here and trying to offer a short description of each would lead to a ten-page review. In any case, what matters is that Kepler manages to keep the narrative moving forward at all times and gives glimpses of all relevant past events. This is the fifth entry in the Joone series, and while having read the previous books is not entirely necessary, readers familiar with the characters and everything that has happened up to this point will get more out of the novel.

Kepler, which is the pseudonym of husband and wife team Alexandra Coelho Ahndoril and Alexander Ahndoril, knows that pace is crucial in a novel of this length. The action comes and goes in Stalker, the narrative fluctuating between discussions and conversations between characters, explanations of past events, analysis of the case, and brief explosions of action accentuated by brutal violence. These elements, coupled with relatively short chapters and a lot of dialogue, come together to offer a satisfying reading experience.

While there is a lot to enjoy here, this is not a novel for everyone. Contemporary crime fiction can be mostly divided into two camps: short, punchy novels and novellas and long, expansive, unhurried narratives. This one belongs to the second group. There are passages and even entire chapter where the sense of urgency is lost or where the author spends a lot of time reminding the reader of things that happened previously. Lastly, there are a plethora of instances in which descriptions cut into the story in ways that add nothing to the narrative. Lines like “A woman with a shawl on her head gives him a wary look and hurries away as he draws close to her” are peppered throughout the novel. The woman is not a character. Her look and subsequent move add nothing to the story. What she is wearing is irrelevant. However, she is there. The same can be said for descriptions of places where no action takes places as well as dozens of individuals who are of no importance to any of the many storylines at play. This is as much Kepler’s fault as it is the book’s editor. Ultimately, this novel would have been just as effective with 100 fewer pages.

Despite the aforementioned shortcomings, there are plenty of reasons why the Joona novels have been such an international success. Kepler has a talent for showing the darkest corners of the human mind through crime. Furthermore, there is a cinematic feel to the prose that keeps readers turning pages regardless of pace, and that is a hard thing to achieve.