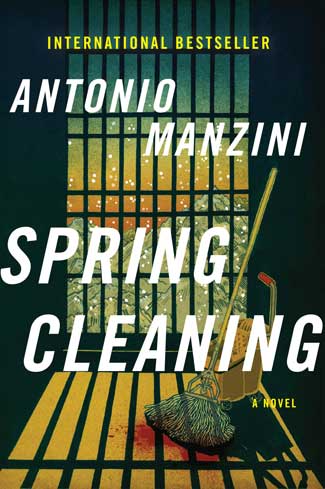 Spring Cleaning by international bestselling author Antonio Manzini is the fourth installment in the Rocco Schiavone mystery series, which picks up three days after Out of Season left off, as Rocco seeks revenge for a friend—and closure for himself.

Vitality isn’t a word often used in descriptions of murder mysteries. The proceedings revolve around the polar opposite—the end of life. For a crime novel to somehow still feel so alive on the page, so filled with the sensory details and intimate thoughts that make up a person’s existence, feels like a modest, if important, triumph of the spirit. At least, that’s how I felt upon reading Antonio Manzini’s fourth Rocco Schiavone mystery novel, Spring Cleaning, which plunges the reader headlong into the aftermath of the murder of Adele Talamonti, shot to death in Rocco’s bed while sleeping.

Adele was Rocco’s best friend’s girlfriend, and she had come to the provincial town of Aosta to get away from Rome and, in all frankness, her boyfriend. Not that she hadn’t loved Sebastiano; she only wanted to give him an opportunity to miss her a little too. Rocco had loaned her his apartment while he was off making poor choices elsewhere, and an intruder had shot her dead, mistaking her sleeping form for Rocco’s.

The guilt of this is the final straw in Rocco’s complex emotional life. As deputy chief of the state police, he’s seen more than his fair share of pain—including, most keenly, the loss of his beloved wife, Marina. But he’s also acquired more than his fair share of enemies, especially given his recent successes thwarting the mafia operating in Aosta. The assassin who murdered Adele could be one of any number of people, including someone involved in his most recent case where he recovered the kidnapped daughter of a local businessman. Now, that is a case that won’t stay closed, as new developments keep seeking Rocco’s attention despite his need to bring Adele’s killer to justice.

In the hands of a less talented author than Mr. Manzini, the proceedings would seem fairly standard for the genre. But the deft plotting is laced with enough humor and pathos, sympathy and anger, to feel like the interior workings of a real person and not merely a creation on paper. Rocco is the kind of cop you want in your corner—an intelligent man who believes in justice and does his best to manage people as well as his own thoughts and impulses. Sometimes, this involves hiding outside his second-story office window to avoid former clients; other times, this means dressing down a police constable with delusions of superiority to the general public:

“So you’ve studied stand-up, too, haven’t you?”

“That’s right. At the police academy.” Rocco looked at the constable, who narrowed his eyes, uncomprehending. “I’m a deputy chief of the state police, my name is Rocco Schiavone, and you can just thank the good Lord above that there’s a pane of glass between us, otherwise by now you’d be picking your teeth up off the asphalt. Did you think that was funny?”

The constable turned serious. He stood up. “Couldn’t you have said so right away?”

“Why, you fucking stupid dickhead? There isn’t supposed to be any difference between me and someone who isn’t a member of the police, as far as you’re concerned, asshole! Do the job they pay you for. So do I have your full and undivided attention, now? Do you think you can answer my questions?”

Mr. Manzini’s descriptive passages are no less compelling than his dialog. Rocco has a habit of categorizing the people he meets as animals, based in large part on their physical appearance. While at a party he’s only reluctantly attending, he comes across a notorious mobster whom he’s dealt with before:

All that remained of [the mobster’s] dangerous years was a small scar under his square jaw. There was no need to expend any effort to give him the appearance of a specific animal. [Rocco had] always known it: Walter Cremonesi was a Dendroaspis polylepis, better known as a black mamba. His eyes were lively and wide-set, his mouth was lipless, and his lean body seemed ready to dart forward from one moment to the next. But the thing that he most had in common with the reptile was the shape of his head. Like a coffin. Walter swiveled his small dark eyes toward Rocco, and a barely perceptible light seemed to flash in his irises.

As the fourth book in the series, Spring Cleaning isn’t the easiest entry point to Rocco’s continuing adventures. But it’s definitely an excellent, worthwhile read, especially as translated to the English by Antony Shugaar. I’m greatly looking forward to reading more from this author, and I have already picked up some of his back catalog to enjoy while waiting for future books in translation to arrive.