Book Review: Someone We Know by Shari Lapena 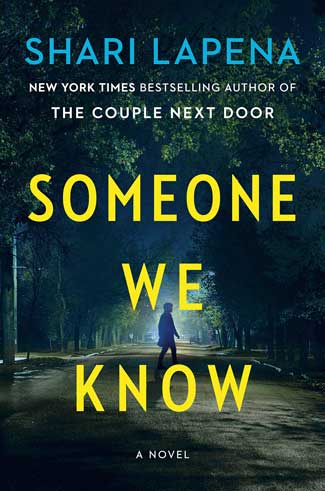 Someone We Know is a new domestic suspense thriller from New York Times bestselling author Shari Lapena, where a murder shakes a quiet NY community that might have some dark secrets among neighbors.

Shari Lapena has mastered the domestic suspense subgenre with her unnerving thrillers, and her latest, Someone We Know, is no exception. Lapena subtly introduces readers to what appears to be your typical, American neighborhood and then, like a fine surgeon, peels back each layer right in front of your eyes. The end result is a novel that displays one of the biggest fears in modern times—just how little we really know about our neighbors and those who live right near us.

The prologue takes us two weeks back in time where we see someone approaching a woman in a kitchen and bringing a hammer down on her head. The mysterious identities of the woman and the attacker aren’t revealed until much later in one of the many plot twists from Lapena.

The action is set in the fictional town of Aylesford, located in New York State’s Hudson Valley. It is a picturesque and haunting part of the Empire State, nestled within the Catskill Mountains a little more than an hour outside of NYC. Jumping ahead to present day, a man named Robert Pierce is phoning the police because his wife, Amanda, has not returned from a weekend away with one of her girlfriends. The problem is that the girlfriend, Caroline Lu, said she never went anywhere with Amanda and knew nothing about her weekend getaway.

We then jump to one of Robert Pierce’s neighbors, the Sharpes. Parents Olivia and Paul are horrified of an errant text to their son, Raleigh, that gives them great concern. Raleigh admits that he has been breaking into random homes in the neighborhood. He doesn’t steal anything, but he does hack into the owner’s computers and sends fake emails from their accounts.

Paul feels the need to employ an attorney since their son broke the law. Even though Olivia agrees, she takes it upon herself to type out anonymous notes of apology to be left in plain white envelopes at the homes Raleigh entered. Ironically, one of the homes was that of Robert Pierce, while the other was a relatively new person to the neighborhood, a woman named Carmine Torres, who lives alone.

Meanwhile, things get sticky when Amanda Pierce’s car is found at the bottom of a nearby lake with her body stuffed into the trunk. The local medical examiner indicates that Amanda suffered blunt-force trauma to her head, most likely with a hammer, prior to being placed inside her vehicle. Now, Detectives Webb and Moen have a brutal homicide to unravel. Making things that much more interesting is the fact that Raleigh Sharpe may have discovered something on the Pierces’ computer that could help uncover the murderer. When two local men who worked in the same office that Amanda temped in are deemed persons of interest, a moral dilemma surrounding Raleigh coming forward is presented since one of the suspects is his father, Paul.

Someone We Know juggles these characters and half a dozen others skillfully. Readers will go back and forth many times while attempting to guess the identity of the murderer. The additional introduction of Raleigh Sharpe’s crimes, as well as some other shady things that are later uncovered, threatens to tear this small Aylesford community apart. Another top-notch read from Shari Lapena, who has definitely firmly supplanted herself in the domestic suspense genre and is enjoying the accolades that have deservedly followed.