Book Review: So Many Doors by Oakley Hall 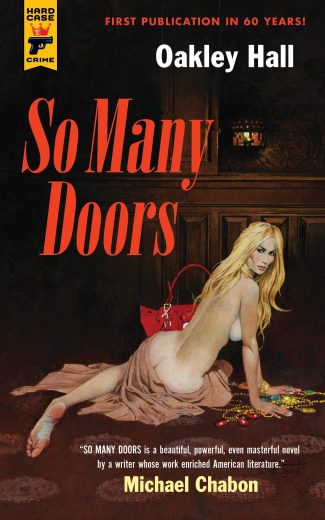 So Many Doors by Oakley Hall is the legendary lost crime novel from the Pulitzer Prize-finalist and instructor of Ann Rice, Amy Tan, Richard Ford, and Michael Chabon.

Pulp has always had a heart, but when a talented author makes it a point to bridge the gap between the violence and sexiness of pulp and the darkest, most painful feelings humans can feel, the result transcends genre. In Oakley Hall’s So Many Doors, desire and jealousy collide in a deadly way and leave a long trail of broken hearts, shattered lives, hurt people trying to escape, and even death.

So Many Doors kicks off on death row, where a man condemned to death refuses the services of a lawyer who has been assigned to defend him. He is there because of a beautiful woman by the name of Vassilia Caroline Baird. V, as everyone called her, grew up on a farm during the Great Depression. Her father had been a jealous man and lived under the shadow of the woman he lost. When V’s father brought a “cat skinner” to work on his farm, the young man and V hit it off, and V got kicked out of the house as a result of her budding relationship with the man.

On the streets, on her own, and with little life experience, an estranged father, and an older man who is crazy about her in a strange way, V is forced to learn to navigate the world while trying to keep the man she loves obsessed with her at all cost. What follows is a mosaic novel told from different perspectives in which V is always at the center of the action, and wherever she goes, trouble, violence, and jealousy quickly follow.

On the surface, So Many Doors is a novel about a very attractive woman forced to become a different person because her father was haunted by ghosts from his past. However, just beneath that first layer, Hall offers a narrative about hunger so strong that it becomes painful, frustration at not having what is desired, and the plethora of problems that can come from extreme possessiveness and all-consuming sexual desire. All of these elements come out clearly in the prose, forcing readers to confront everything the author throws at them:

He wanted to tell her that he himself had never had anything beautiful; except the land, which was beautiful only at this time of day, and only then if he could forget what it had taken out of him; except Cora, who had died before he had ever known her and of whom he had been jealous and suspicious until the end and even after it; except her, V, who somehow did not belong to him.

There are plenty of novels about complicated love, but this one is special for two reasons. The first is that it unapologetically engages with all the elements of classic pulp while also striving to offer readers top-notch writing. The second is that it never deviates from what beats at its core: the maelstrom of feelings populating the dividing line between love and hate. V more or less provokes these sentiments in all the men—and most of the women—who cross paths with her, starting with her father, who catches her on the floor of their barn in the arms of her first lover:

With furious haste he pulled V’s suitcases down from their shelf in the closet. He jerked open the drawers of the bureau and blindly dropped her things into the suitcases, mouthing harsh, self-pitying words. And now Cora’s face had separated itself from V’s and was dead and gone, and now it was V who was cuckolding him, lying on the filthy floor of the shed like an animal with Ward.

So Many Doors is being published for the first time in 60 years, and that means some of its content hasn’t aged well. For example, there are bits of blatant racism in there: “I’d rather have a colored boy than a Mex any day.” It also presents a sexist society. That said, neither of those things ever becomes an overpowering presence, and they both are dealt with peripherally, allowing the story of each character as they relate to V to remain at the epicenter of the narrative at all times.

There are many feelings at work in this novel, but the one that causes the most destruction—both physically and emotionally—is jealousy. Love is there. Hatred is there. But the thing turning one into the other and then back to its original again is jealousy. Hall writes about it commandingly, in a way that betrays he experienced similar situations or was a witness of mayhem involving them:

From that time on there what is the black, rotten jealousy that he was not the only one; the being sure, the wondering who. From that time on there was the jealousy and the strain of keeping from V the fact that he was jealous, that he cared that he was not the only one, the humiliation of knowing he could not keep it from her, and this doubled because he was sure it must be known to others that she was public property, and so he must face down the humiliation and hide his jealousy from his friends, not knowing if they knew, wondering what they thought, wondering what they said about him among themselves.

So Many Doors is a novel from another time, but the things that give it shape are timeless and universal. Hall was a great writer, and this book will surely offer a new generation of readers a chance to discover his work. It also constitutes a solid addition to Hard Case Crime’s already outstanding catalog.