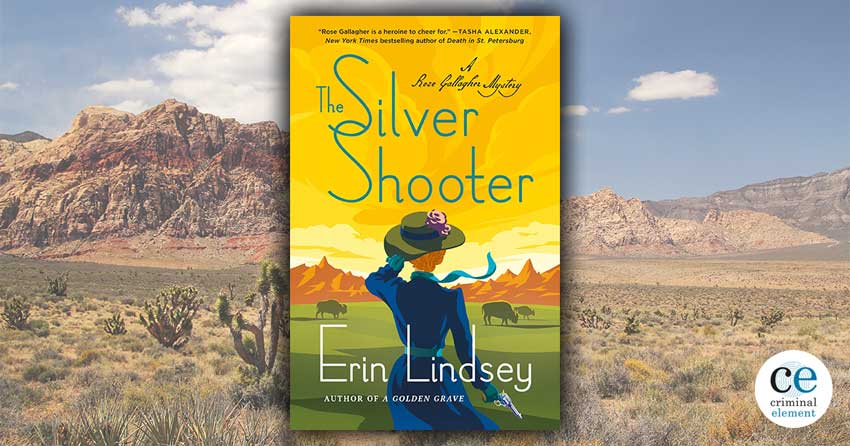 The Silver Shooter by Erin Lindsey is the third book in the Rose Gallagher Mystery series, where Rose and her partner, Thomas Wiltshire, track a monster and search for treasure in the wilds of the Dakota Territory.

Several months into her training as an agent in the Pinkertons’ secret supernatural division, Rose Gallagher and her partner, Thomas Wiltshire, are approached by an exceedingly powerful and lucky client: Theodore Roosevelt. Impressed by their work foiling his would-be assassins in their last adventure (A Golden Grave), the young Mr. Roosevelt has come to them with a story that’s equal parts tragedy and—possibly—supernatural foul play. Roosevelt’s Dakota ranch has just suffered through a winter so harsh and deadly, some of the locals suspect it was unnatural—perhaps even the work of an elemental being.

“I lost a great many of my backwoods babies. Cattle, that is.”

“Thirty-two thousand head,” he replied wistfully. “Plus more than a thousand calves. That was last fall, mind you. As of now, I couldn’t give you a number. We’re still rounding up the stragglers, but we estimate the losses at about sixty-five percent.”

Thomas jerked forward in his chair. “Sixty-five percent? Good heavens! I’d read in the papers that the industry had taken a blow, but this… why, it’s staggering!”

“I fared better than most, if you can believe it. And though perhaps ruined is a touch overstating the case, I am exceedingly strained, and I don’t know that I can sustain the investment.”

Our guest grunted. “What an interesting choice of words, old fellow. It’s some kind of luck, if I have any nose for it.”

Thomas narrowed his eyes. “Are we to understand something more than nature was at work here?”

“I will not claim to master all the secrets of Mother Nature, Mr. Wiltshire, but one thing I know for certain: Something strange is going on in the Badlands. Something evil. And the way things are going, by this time next year, there will be no one left to stop it.”

It’s not just the cataclysmic weather that has Roosevelt making such dire pronouncements: a wealthy prospector with a nose for gold has also disappeared, sparking stories of his ghost haunting the Medora hotel and sending treasure hunters into the woods in search of his riches.

And then, there are the savage, bloody attacks from an unknown creature spiraling ever closer to the small, quickly emptying backwoods town. Cattle, horses, deer, and now men are being slaughtered. The ranchers are blaming the local Native Americans, who are in turn pointing the finger at the encroaching settlers; the situation is fast becoming a powder keg on the verge of explosion.

Rose and Thomas are thoroughly city folk, but Roosevelt is confident they can get to the bottom of the three-fold mystery in the Badlands. So off the pair goes, taking the long train ride out west to a place even more lawless and dangerous than the slums of New York—a place where they’ll have to be on their guard, even as they’re tempted to lower their defenses around each other.

“Thomas,” I whispered, instinctively reaching for him.

The night was ablaze with stars, tiny pinpricks of cold white light scattered across an impossible canopy of sky. The moon had sunk below the horizon; in its place, a glittering band of light traced a clear path through the heavens. At its center, a black void yawned, as though the sky itself were torn. I knew this for the Milky Way, but I’d never seen it. In New York, you could barely make out the stars at all, what with the smoke and ash of steam trains and factories, not to mention hundreds of thousands of homes heated with coal and wood. They were clearer in Newport, but this… The sky wasn’t just above us, it was all around us, as if poised to swallow us whole. The thought made me a little dizzy, but Thomas was there to steady me.

“Magnificent,” he murmured as I leaned against him.

Lindsey continues to thoroughly charm with The Silver Shooter, the third installment in her Rose Gallagher series. By transplanting her plucky heroine and her capable, enigmatic partner/love interest to a rugged Western setting, we get to see Rose and Thomas out of their usual element (and free of the societal mores that constrict them in New York). This allows for some significant character development as well as raised stakes in the Rose/Thomas partnership. This investigation is definitely a pivotal one in their relationship, setting them on an unexpected trajectory by the final page.

And with three concurrent mysteries/threats to overcome—a ghostly prospector, a monster, and the possibility of a Fae elemental—as well as plenty of mundane human baddies to dodge, there’s no shortage of excitement or paranormal surprises. The Silver Shooter fairly crackles with propulsive energy and racks up quite the body count.

Lindsey continues to steadily develop the magical system and aspects of her alt-history world, peppering in plenty of real faces (Tesla, Roosevelt, Seth Bullock) for extra color. The concept of “luck,” which covers a variety of superpowers from eidetic memory to electricity manipulation, remains a fun and plot-rich explanation for why some folks seem more larger-than-life than others. This remains one of the richest, most enjoyable historical fantasies I’ve come across.

And for all of Lindsey’s research, this is also one of the most readable historical adventures—a book you’ll devour in just a sitting or two. It’s been a joy to watch Rose progress from curious maid to capable Pinkerton over the course of three books. I can’t wait to see what’s in store for her in book four.

Read an excerpt from The Silver Shooter!