February 1, 2022
In the first book in the Shady Hollow series, we are introduced to the village of Shady Hollow, a place where woodland creatures live together in harmony—until a toad turns up dead and Vera Vixen has to solve the case. 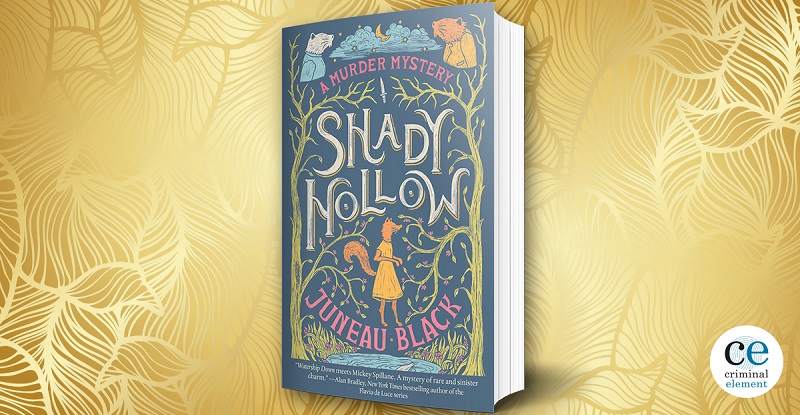 Welcome to the quiet northern town of Shady Hollow, populated by anthropomorphic woodland creatures peacefully going about their daily business. Gossip columnist Gladys Honeysuckle is on her way to work one morning when she spies something unusual in the waters of the millpond. Hovering closer, she discovers the floating corpse of town curmudgeon Otto Sumpf and quickly flies off to alert the authorities.

Gladys’s colleague Vera Vixen hears about this and hightails it to check out the scene. In the absence of the police chief, Deputy Orville Braun has taken charge of corpse recovery, only to find, to his chagrin, that Otto’s body has drifted further into the waters than he can safely reach from shore. Vera tags along with him as he makes his way to the local sawmill in search of help, and takes the opportunity to ask questions for her coverage:

“I’ll have to commandeer a boat,” Orville growled on the way. “The chief took the police boat on a fishing expedition.”

“What’s he hoping to find?” she asked, curious.

“Fish, I’d guess.” Orville looked blankly at the fox. “What else?”

Vera stared back at the brown bear, suspicious. “A literal fishing expedition?”

“Is there another kind?”

What Orville lacks in imagination, he makes up for in authority, quickly securing a boat and, ahem, fishing Otto’s body out of the water. To his horror, he discovers that the toad wasn’t a mere victim of misadventure. Otto was stabbed, and the knife is still lodged in his back. Vera quickly returns to the office to report on this scoop, which soon has the entire town all a-flutter. Otto had never been the most popular person in Shady Hollow—he was a misanthrope who often complained about the sawmill, the town’s biggest employer, for disturbing his afternoon naps—but who on earth could have hated him enough to murder him?

Vera is determined to find out, especially since her encounters with the local constabulary haven’t exactly raised her opinion of them much:

In fact, Vera was fairly certain she was by far the most experienced investigator in Shady Hollow. She had worked the crime beat in a big city down south before opting for a quieter life in Shady Hollow. Not many of her neighbors knew about her past, and Vera wasn’t inclined to enlighten everyone else. She had her own secrets, and she preferred to keep them close.

Vera isn’t the only one with secrets, however, as she’ll quickly discover in the course of her investigation. Plenty of her fellow citizens have lots to hide, even if major crimes have been a vanishingly small part of their everyday lives. And as crime is such a rare occurrence in Shady Hollow, Vera can’t really hold Deputy Orville’s lack of experience against him. It’s to his credit that he’s ready to accept help where and as he can, even if it comes in the form of a meddling newspaper reporter with a too-high opinion of her own survival skills.

The way these characters (and several others, including the charming bookseller Lenore Lee and the mysterious restaurateur Sun Li) come together to get to the bottom of the case makes for an absolutely delightful cozy read. The cast may be somewhat unusual in that they’re all woodland creatures, but that honestly adds to the escapist atmosphere, a bit like a prose, pastoral version of the Disney film Zootopia. A remarkable empathy is also on display in these pages, putting this book firmly in the category of heartwarming reads despite the murders it chronicles.

Two sequels are already slated for publication later this year, and I’m happily anticipating getting to spend a lot more time with the creatures of Shady Hollow as they solve crimes and bring murderers to justice. These are the perfect cozy mystery reads for our pandemic times, with just the right amount of wholesome fantasy to leaven any darkness.