Turning and turning in the widening gyre

The falcon cannot hear the falconer;

Mere anarchy is loosed upon the world.

William Butler Yeats, “The Second Coming”, featured in the opening of Shadows Reel

Shadows Reel is the twenty-second Joe Pickett mystery/thriller novel from C.J. Box. The book is scheduled to be released on March 8th, 2022, by G.P. Putnam and Sons. This entry is one of the author’s strongest. The fact that the public, and the publisher, have stuck with the series for so long tells you a lot about Box’s craft. He is a master of forming characters readers care about, and he is among the best at creating situations that are exciting, while still being believable.

Shadows Reel is about the Pickett family during the Thanksgiving holidays. The family is gathering at Game Warden Joe Pickett’s new, government-provided, home. The Picketts are waiting to see if they are going to be wealthy due to a stock deal and they are slightly distracted for this reason. Marybeth, Joe’s wife, works at the local library. Early one morning, before opening, she discovers a package. Inside the envelope is a prominent Nazi’s photo album. Marybeth soon learns that several Soldiers from local families had served in Germany during World War II, and many of them were part of the unit that stormed Hitler’s Eagles Nest. Soon, people in the album’s orbit start dying. It is up to Joe, and a less than enthusiastic Sheriff, to figure out what is happening.

I enjoyed the prose immensely. Furthermore, Box is outstanding at setting the scene. Here is an example:

The Palomino was dark and close inside. Except for a lighted shadow box containing a John Elway-signed football on the wall, he could be stepping into a portal that took him to “Denver, 1975.”

There was an unused pool table lit by a hanging lamp, its green felt ripped by errant cue tips. Black-and-white photos of downtown Denver in the 1930s decorated the walls.

The Backbar was carved wood and inappropriately ornate and had no doubt come from somewhere else.

During the events surrounding the photo album, a significant subplot plays out. This storyline features Nate Romanowski, a relative of Joe’s. Nate is a falconer whose livelihood, and financial security, is being threatened by a shadowy figure from Nate’s special operations past. The special operations veterans are men of action. Their scenes are fast and violent, as shown here:

With one smooth motion, Axel raised his Glock and fired at the cop. He fired off three rounds low to hit the man in the front of his thighs and then he swung the gun up and put three more in his face and neck. Axel avoided firing center mass since it was likely the cop was wearing an armored vest.

The cop went down hard as the concussion from the shots echoed through the alley.

The book concludes with a double finale, bringing together and resolving both plot lines. The ending was satisfying and well done.

Box’s tempo and plot development are amongst the best I’ve ever read. He keeps the pages turning quickly, while still ensuring the reader is engaged with the characters. I enjoyed this book immensely, and I will be begging the editors of Criminal Element to think of me when they need a reviewer for Joe Picket #23. 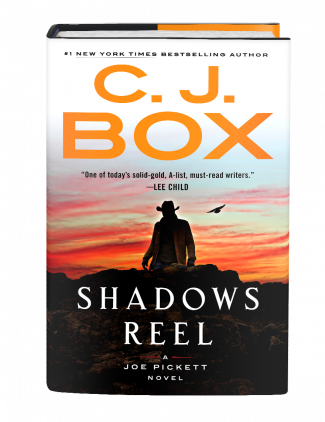 A day before the three Pickett girls come home for Thanksgiving, Joe is called out for a moose poaching incident that turns out to be something much more sinister: a local fishing guide has been brutally tortured and murdered.  At the same time, Marybeth opens an unmarked package at the library where she works and finds a photo album that belonged to an infamous Nazi official. Who left it there? And why?

She learns that during World War II, several Wyoming soldiers were in the group that fought to Hitler’s Eagles Nest retreat in the Alps—and one of them took the Fuhrer’s personal photo album. Did another take this one and keep it all these years?  When a close neighbor is murdered, Joe and Marybeth face new questions: Who is after the book? And how will they solve its mystery before someone hurts them…or their girls?

Meanwhile, Nate Romanowski is on the hunt for the man who stole his falcons and attacked his wife. Using a network of fellow falconers, Nate tracks the man from one city to another. Even as he grasps the true threat his quarry presents, Nate swoops in for the kill—and a stunning final showdown.