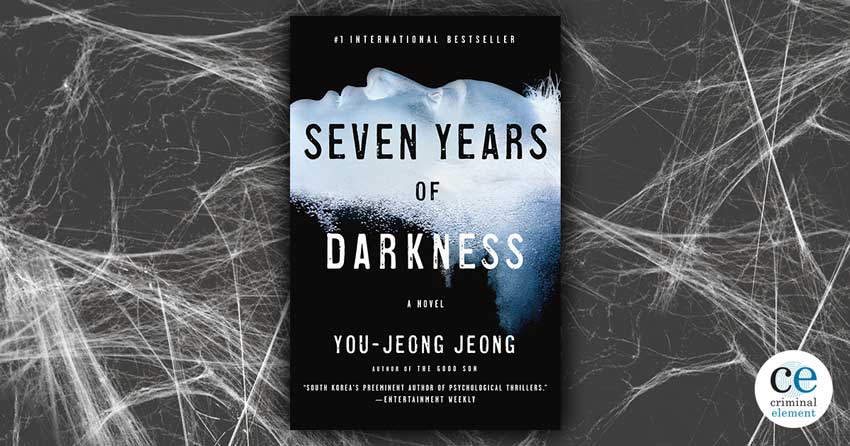 Dark, disturbing, and full of twists and turns, Seven Years of Darkness by You-Jeong Jeong is a riveting new novel about a son forced to deal with punishments resulting from the sins of his father.

Sowon is the son of a convicted murderer, the man responsible for “The Seryong Lake Disaster.” He was 11-years-old when his father was arrested. Mr. Ahn, his father’s roommate when he was a guard at the Seryong Lake dam, protected Sowon after his father’s incarceration and before Sowon’s relatives took him in. Sowon’s life spiraled downward under his relatives’ mistreatment. They ultimately abandoned him, moving away without telling Sowon their new address and changing their phone numbers lest he attempt to find them.

Snow swirled into the phone booth through the gaps around the door. My jacket was too thin and my jeans were too small—my ankles were bare. I had grown out of my sneakers, so I was wearing them with the heels folded down—like slippers. I hadn’t eaten anything all day. I only had a hundred-won coin left.

There was only one number I hadn’t tried—Mr. Ahn’s cell phone number. There was probably no point, since he’d given me his phone and Uncle Jongu had broken it, but I dialed, cautiously hopeful. Maybe he’d bought a new cell phone after giving me his, and was still using the same number …

It rang for a long time. Finally, a slow, clear voice said, “Hello?”

It was Mr. Ahn. I had never forgotten his voice. My throat closed up and I couldn’t speak.

Finally, Sowon catches a break when Mr. Ahn takes him in. Sowon enrolls in school and devotes himself to his studies, desperate not to be cast off. He’s an exemplary student and starts to dream of reuniting with his father “when the true criminal [is] apprehended.” But since Sowon avoids all media, he doesn’t know the full story.

Sure, I’d heard rumors about the number of people killed, how they’d died, and my father’s sentence. But that was about all I knew.

The following afternoon, I received a manila envelope that shattered my last vestiges of hope. The return address was a PO box. Inside was that week’s issue of the popular Sunday Magazine. A single photograph was splashed across an entire page—a boy looking back at the camera, his mouth closed firmly. Me. Eleven-year-old me, standing in the sea of light at the Sunchon police station.

Sowon reads the tragic story of a young girl murdered. Three men were listed as suspects: the girl’s father, Yongje; and “two security guards at the nearby dam.” One of the guards was Sowon’s father. When Sowon attends school on Monday, he sees “a copy of the magazine on every desk, opened to the article.” Mr. Ahn and Sowon move on, and a pattern emerges of the two re-establishing themselves in a new community only for Sowon to be eventually outed. Ancient Greek poet and playwright Euripides said, “The gods visit the sins of the fathers upon the children,” which sadly rings true for Sowon.

We became drifters, usually staying in port cities. Mr. Ahn was an avid diver; he taught me how to dive, and the sea gave me a sense of freedom. In the underwater darkness, the world vanished, and nothing could reach me. I was safe from people’s prying eyes and their malicious whispers.

Mr. Ahn and Sowon eventually move to Lighthouse Village, a tiny community so remote that it isn’t on GPS. Yet they are still somehow outed by strangers. Before Mr. Ahn disappears, Sowon has a premonition.

They say a cat can sense thunder right before it rumbles. Perhaps the human brain has a similar sensory ability—the clock of anxiety that beings ticking when catastrophe looms. Later that night, in the room I shared with Mr. Ahn, I lay in bed but couldn’t fall asleep. I drifted back into my memories, back to that day seven years ago when the police had separated me from Mr. Ahn.

In the aftermath, Sowon obtains Mr. Ahn’s copious notes written at the time of the disaster. What Sowon reads is confusing, like learning that the murdered girl was named for the lake. There are troublesome facts, like “Seryong had been beaten by her father. He had seen the violence in Dr. Oh’s eyes and the fear in Seryong’s.” As Sowon learns about his father, the players and the minute-by-minute events of the past start to add up. Mr. Ahn once told Sowon that he read in Sunday Magazine that the details given weren’t the whole story. So what is?

I biked to the lighthouse and sat at the edge of the cliff, looking out at the sea. Friday, August 27, 2004. The girl was still alive that afternoon. I couldn’t stop my mind from going back to that summer seven years ago.

Sowon’s father’s execution is imminent. His son is told what day he should come to the prison to receive his father’s ashes. Everything comes to a heart-stopping denouement.

Seven Years of Darkness is both a description of a teenager’s past and a bookend to a brighter future. You-Jeong Jeong’s writing is lyrical, almost poetic, particularly when she describes Sowon’s seven years in the wilderness and his desperate attempts to erase himself from notice. A verse from John Milton’s epic poem Paradise Lost reflects Sowon’s experience, “Long is the way and hard, that out of Hell leads up to light.” It’s a statement that mirrors the book’s tagline, “The truth always rises to the surface.” Seven Years of Darkness is an unforgettable book that defies description.