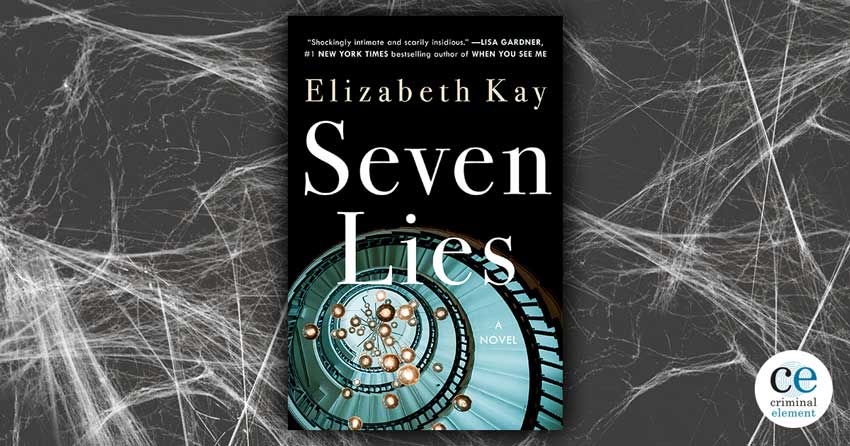 Seven Lies by Elizabeth Kay is compelling, sophisticated, and chilling—a seductive, hypnotic story about the tangled, toxic friendships between women, the dark underbelly of obsession, and what we stand to lose in the name of love.

Who hasn’t had the experience of seeing a friend fall deeply in love with someone totally wrong for them? You have two choices: speak up and risk earning the enmity of both friend and new partner or hold your tongue and hope that things work themselves out for the best. Or, as in Jane Black’s case, you can smile and tell your friend you think they’re right for each other and set yourself down a path of lies, betrayal, and murder (latter two optional).

Jane and Marnie have been best friends since they met in grade school and have managed to stay close through college and Jane’s early marriage and sudden widowhood. Marnie helped Jane pick up the pieces after Jonathan’s death, offering a support that Jane’s family couldn’t or wouldn’t provide. With an absent father, a mother suffering from dementia, and a self-obsessed sister, Jane has little going for her by way of personal contacts, so she relies on Marnie to deal with the traumas of her life.

When Marnie first meets Charles, Jane assumes that her bright, lovely friend will quickly see through his larger-than-life facade. But as time passes, Marnie seems to find more and more contentment with the kind of man who, as they plan their wedding, would decide that he doesn’t want his sick mother in attendance because it would pull focus from the happy couple. If Jane hadn’t hated him already, this would certainly convince her that he wasn’t worthy of her best friend:

Because it was confirmation that he really was detestable, that my hatred wasn’t unfounded or undeserved but justifiable and fair. And more than that, because it proved something that I hadn’t felt confident articulating before then: that I really was better than him. I took care of those who needed me: I understood that it was part of the contract of love, of duty, of family.

I could see then that he wasn’t all in—not at all costs; not at all.

Things go quickly downhill from there, and Jane finds herself telling Marnie seven substantial lies as their friendship goes awry. A relationship that was once a touchstone for both women becomes something ugly and toxic as Marnie grows increasingly distant and Jane grows increasingly desperate. With the rest of her life collapsing around her, Jane needs her friend—but what lengths will she go to in order to preserve their friendship in the form she wants it to be?

Seven Lies is a distressing look at what happens when people grow apart but refuse to accept the reality of it, much less gracefully move on. Jane is a complicated, tortured narrator who often seems oblivious to how awful the people around her are, preferring to blame herself for not trying hard enough or not being good enough when someone is mean to her. One prime example is when she’s recounting to her sister, Emma, a terrible thing Charles did to her:

Here, then, is something that I’ve thought about regularly over the last few months. Emma didn’t know Charles. She had no reason to doubt my experience, no reason not to believe that he really was a depraved pervert[.] And yet Emma’s instinctive response was to question not Charles’s character but my version of events. What does that say about me? About my capacity for truth? About my ability to accurately read a situation?

Does it, in fact, suggest that Charles was innocent of all wrongdoing that evening? That the error of judgment was mine and mine alone? I don’t think so, but it’s worth your consideration. This is my truth, after all. And that is not the same as the truth.

That Jane would prefer not only to blame herself but to also paint herself as the villain in the situation rather than confront the fact that maybe her sister is a terrible human being whose first instinct is to blame the victim is telling of her peculiar need to put her loved ones on ill-deserved pedestals. Of course, this doesn’t mean that Jane isn’t also the villain of the novel—but you’ll have to read the book to find out exactly what twisted lengths she’ll go to in order to safeguard her bonds with the ones she loves.