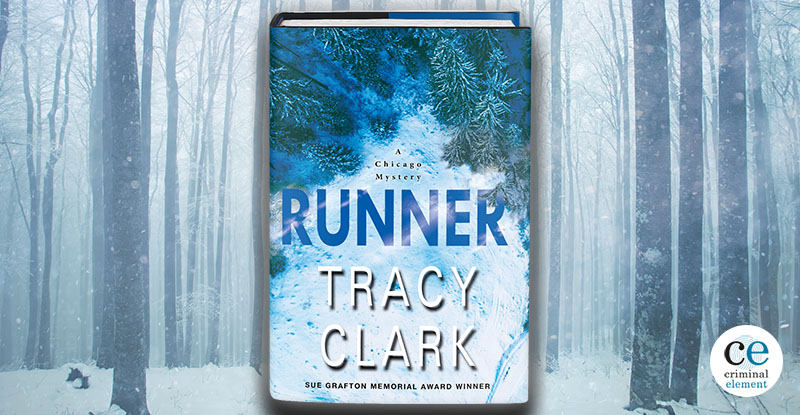 Chicagoan Tracy Clark writes what she knows. Part of a rich tradition, she stands on the shoulders of Black writers who led the way, even when they were the antithesis of mainstream. In a recent essay, she rounds up Black detective novels “from then until now.”

These black writers, these pioneers, did the heavy lifting. Looking at their contributions figuratively, they could be said to have planned the house, mixed the concrete, and laid the foundation. Those who came after them built the walls and set the windows, moved in the furniture. My contemporaries and I have it easy in comparison. All we have to do is stand guard over the house, keep it safe and sound for those who come after us.

Runner is the fourth Chicago Mystery book. Tracking down a runaway teenage girl, Cass Raine’s latest case, gets personal for Chicago’s Southside-based “Black homicide cop-turned P.I.” It’s no time for a young girl to be on the streets: it’s “Chicago. Brutal. Winter’s threat—keep it moving, sucka, or die where you stand.”

Ramona Titus is a fifteen-year-old who has been in foster care for five years because her mother, Leesa Evans, is an addict and unable to be a good parent. Ramona seemingly has a good relationship with Deloris Poole, her foster mother, so why take off? Leesa is working the program and has been clean for ninety-seven days. She wants to rebuild her relationship with her daughter but Ramona is missing. Leesa asks Cass to find Ramona, proffering a nest-egg of a couple hundred dollars.  Cass is cognizant of her client’s shaky finances and quickly tries to calculate how many days she “could afford to work for Evans for free,” but Leesa has pride.

I gathered up the bills, folded them, and handed them back. “Hold on to this for the time being, how’s that?”

Evan’s eyes fired. She put the money back on the table. “I don’t imagine you work for free, do you? I sure as hell don’t. If this isn’t enough, then you tell me how much more, and I’ll figure it out. I’m no charity case.”

Ramona’s mother and Cass come to a “silent understanding.” Leesa Evans has picked the right detective: “If Cass takes on your case, she’ll stick with it no matter how many noses she puts out of joint.”

Cass visits Deloris Poole, who is “desperate” to find Ramona and bring her back to her frilly, pink-decorated bedroom: “the small pink-and-white room upstairs looked as though there ought to have been a fairy princess in it, too.” Cass also interviews Ronald Shaw, Ramona’s case manager, a conversation that doesn’t go well. He calls Ramona “disrespectful” for running away from someone as wonderful and caring as Deloris Poole. Cass calls him on it, stating baldly, “You’re high on Deloris Poole.” Sensing she won’t get anything more out of Ramona’s case-worker, Cass says goodbye and starts mentally riffing through her contacts to see who might fill her in on Ronald.

Shaw rose, too. Was that relief I saw on his face? “Ramona was a good kid. But if I were you, I’d leave it to the police.”

I loved it when men felt compelled to tell women what to do in that patronizing tone they might give a meddling child, and by loved, I meant the opposite. In fact, it guaranteed I’d do more of the thing they didn’t want me to do, but they didn’t know that until much later.

Ramona wasn’t the only one to leave Deloris’s care: Cass asks Ronald why he moved Tonya Pierce out a “few days before Ramona ran away.” But Deloris is so sweet, the room for her foster-daughters is so perfect. Something feels hinky about the relationship between the case worker and the house mother and their charges: Cass cynically considers, “if it looks too good to be true, it probably isn’t.”

Cass shifts seamlessly between being a private investigator and a former policewoman. She taps her former colleagues for information, and they do the same right back. Yet some officials seem to not want her to get to the bottom of the mystery of the missing teen. Why? Cass figures out Ramona has cottoned on to some nefarious business and she’s on the run because she’s afraid what will happen to her if she’s caught. Maybe Cass needs to worry too, but that’s never stopped her before.

The bits of business in Runner are enjoyable while also furthering the plot. Take Cass’s visit to Deek’s diner where Muna, her favorite waitress, is gone. Aggie is the waitress on duty and her conversation with Cass encapsulates why readers can’t get enough of P.I. Raines.

Aggie’s sleepy eyes stared back at me. “Taking the day off, but if you’re worried, I can’t cover a diner station, put your mind to rest. This isn’t my first rodeo. Been slinging hash for now on twenty years.” Her dull eyes held mine. “You’re that detective Muna told me about. Extra whipped cream on your chocolate shakes. No butter on your pancakes. You always sit in this booth, with your back to the wall.”

I said nothing, just stared at her, not liking any of it.

“Gangsters do that, too,” Aggie said.

I squinted at her.

Aggie said, “They face the door, so they can see who comes gunning for them. You don’t like change, Muna said.” The pencil twirled in Aggie’s bony fingers. “Says it throws you off. I know people like that. It’s not healthy. You eating or just sitting? Muna also said sometimes you just come and sit. If this is one of those sit times, I’ll leave you to it. If it isn’t . . .” She poised the pencil over her order pad.

But when Aggie challenges her to sit at a different table “instead of holing yourself up back here like a hermit crab under a rock,” Cass takes off. Cass is stuck in her ways but her tenacity gets the job done. Runner is a page-turner with surprising twists and turns: the villains are malevolent and not easy to discern. Another great Cass Raines story from Tracy Clark.