January 17, 2023
Sherry Harris gives readers a new adventure to dive into with the latest installment of her Florida-set mystery series, as local bartender Chloe Jackson’s search for treasure shores up the dead body of a contestant in the upcoming Panhandle Barback Games... Read on for Doreen Sheridan's review! 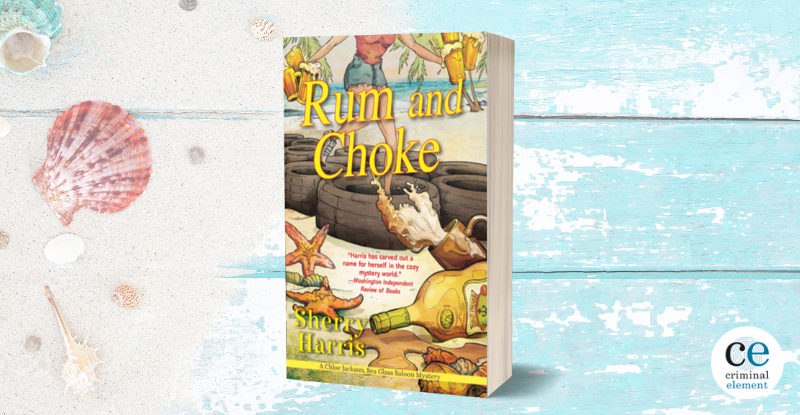 The last thing that former Chicago children’s librarian turned Florida panhandle saloon owner Chloe Jackson was expecting this summer was for her co-workers to sign her up for the annual Florida Panhandle Barback Games held in their very own beachside town of Emerald Cove. It doesn’t help that her main competition appears to be an assortment of overqualified ringers imported for the event. When Chloe expresses her disbelief that the other bars in town would go to such lengths in order to win the title, her co-workers encourage her to investigate for herself. Well, not entirely by herself. Given Chloe’s penchant for unwittingly snooping her way into trouble, she’s happy to accept the friendly supervision of local fixer Ann Williams as she goes from bar to bar.

Chloe is genuinely astounded by what she discovers. As her co-workers claimed, three of the area’s most newly hired barbacks have astonishing pedigrees. Enrique Laurier is both a champion surfer and triathlete. Lisa Kelley was a Wonder Woman stunt double. Jean Claude LaPierre is an Olympic gold medalist who had his heart broken as runner-up on The Bachelorette. Worse, they all soon realize that Chloe hadn’t exactly been honest with them when she came to their places of employment to check them out, and so decide to return the favor:

I looked up to see what sounded like the start of a bad joke. What happens when a stuntwoman, a surfer, and an Olympic shot-putter enter a bar? I now know the answer to that joke: everyone stopped mid-motion.

[…]Lisa walked over to me with Jean Claude and Enrique trailing her. They stopped in front of me like they were the Justice League and I was the bad guy. My only weapon was my spray bottle of cleaner, but I wasn’t afraid to use it if need be.

After the dressing down she receives from her competition, a mortified Chloe is determined to do her best in the games, even if she has little confidence in her odds. Fortunately, Ann has a diverting enterprise for her, whenever she should find some free time. Ann is a descendent of Jean Lafitte, pirate and war hero, and has recently found a map which may indicate where some of his treasure lies on the gulf floor, if her ocean mapping software is to be believed. She wants Chloe to act as her spotter while she dives for treasure.

At first, Chloe is happy to spend some relaxing time on the water, far away from her bar and competitors. But then someone breaks into Ann’s home. Soon after, the women find a dead body while searching their latest set of coordinates. Now Ann is under suspicion of murder, even as the barback games really heat up.

Luckily, Chloe thrives under pressure. Even as she trains, she eagerly takes on another undercover role, slipping back into strict librarian mode to interrogate recalcitrant security system developers, in order to help Ann figure out who broke into her home. She’s quietly pleased at the amount of information they give up to her:

I stood by my car with a half-smile on my face. Being a badass was kind of exhilarating. I hated the stereotypes set up around librarians–that they were geeky nerds who wore cardigans with a tissue tucked up in the sleeve. Librarians were misinformation slayers. Just because we used databases and words instead of swords and guns didn’t mean we never fought a good fight. But, I had to admit to myself, being on Ann’s team was next level in some way.

When Chloe and Ann’s search for answers leads them deep into the Florida swamps, however, will this adrenaline be enough to keep Chloe going in some of the state’s most hostile territory? And what will she do when she uncovers the heartbreaking truth of who would kill to protect the location of a pirate’s long-lost treasure?

I was not expecting the bittersweet ending of this very strong fourth installment of the Chloe Jackson, Sea Glass Saloon mystery series. Sherry Harris expertly blends the playfulness of the games and, to a large extent, treasure hunting, with the intensity of passions long buried. This series feels almost like a cozy thriller, if that’s even a thing. It’s also nice to see Chloe really start to thrive in her new life, unencumbered finally by grief or guilt or the other emotions that chased her down from her Chicago hometown. I’m so excited to see where Ms. Harris continues to go with this exciting, yet comfortingly cozy series!