Book Review: A Resolution at Midnight by Shelley Noble 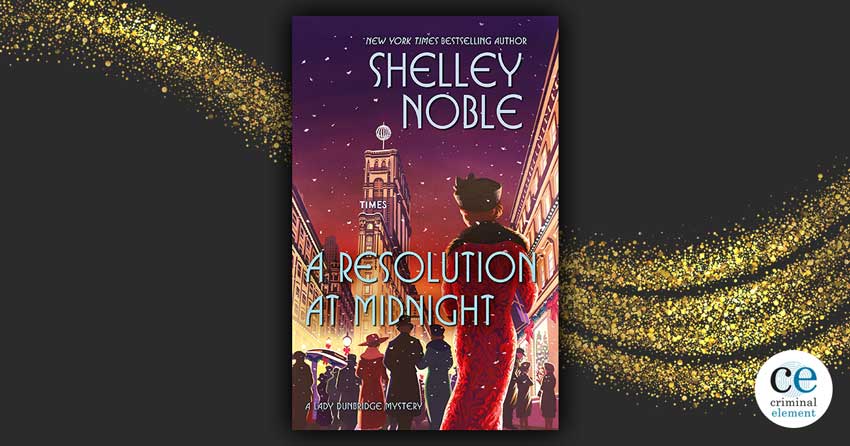 A Resolution at Midnight by Shelley Noble is the third book in the Lady Dunbridge Mystery series, set in Gilded Age New York City, where the Countess of Dunbridge must navigate a dangerous mystery with the help of her friends and the mysterious Mr. X.

Philomena Amesbury, the Countess of Dunbridge, is enjoying her first holiday season in New York City, soaking in the beautiful decorations of the Gilded Age and looking forward to ringing in 1908 with loyal servants Lily and Preswick.

Returning from Christmas shopping one morning, she finds a note from the mysterious man she’s dubbed Mr. X instructing her to attend a nickelodeon. Hoping this will be a chance to discover more about the enigmatic figure responsible for her current work as a secret detective, Phil rushes to the Theater Unique.

Unfortunately, she’s not the only one at the meeting who’s late:

Taking a last quick look around the flickering room, Phil pulled her skirts back, eased into the row, and sat down.

He didn’t greet her. Didn’t even appear to wake up…

And she was filled with an unnamed dread.

She touched his shoulder. He slumped forward. She leaned closer but couldn’t see his face or smell the faint aroma of the exotic pipe tobacco he favored. But she did smell something sickly metallic, and her stomach heaved.

With a Herculean effort, she pulled him upright; his head rolled, then snapped back over the seat back.

The race continued inexorably on the screen.

The gash where his throat had been slit, and the black stain, soaking his collar and spreading down his woolen jumper, appeared and disappeared in the flicking light and dark, light and dark, of the moving picture.

Her mind—and yes, her heart—reeled, as logic fought for purchase.

This was not Mr. X. This man was shorter, stockier, his neck thicker. Even with his talent for absurd disguises, Mr. X couldn’t possibly change so much.

Besides, Mr. X would never succumb to the indignity of having his throat slit in an afternoon nickelodeon.

For the third time, Phil’s up to her neck in a dangerous mystery. The murdered reporter, Tommy Green, was investigating the notorious Black Hand, which has claimed responsibility for numerous bombings and arsons. The fearsome (and fearsomely corrupt) Sergeant Charles Becker is trying to cover up the slaying. There’s a mole at The New York Times, and the possibility of political ties to the case. And Green’s protégé, Marty Rive, may muck up Phil’s investigation in her zeal to break a career-making story.

At least Phil can always count on old ally Detective Sergeant John Atkins, perhaps the only clean cop in New York. And the delicious yet infuriating Mr. X has a knack of turning up at vital moments too. With such friends—and the faithful Lily and Preswick, able investigative assistants in their own right—Phil faces down danger with her usual tenacity and high-society aplomb.

A Resolution at Midnight is the third Countess Dunbridge Mystery from Shelley Noble and builds directly upon her preceding adventures; you could enjoy this on its own merits, but knowing what came before makes this a richer, more satisfying read. So many of the characters here were previously established, from Phil’s BFF, Bev Reynolds, and mysterious maid Lily to the plucky newsboy Just a Friend and the boxer-turned-stable manager Bobby Mullins.

Then, there’s the heroine’s clandestine, romantic dynamic with Mr. X, who always appears in disguise or under cover of darkness. Noble is playing a long game with him, and the buildup to the future reveal of his identity is proving to be both tortuous and intriguing.

His eyes flashed in the dark. She didn’t even know their real color. She’d seen them brown, black, gray, blue—glass lenses, Preswick had told her. Sherlock Holmes had often used them in his many disguises. And people thought fiction was stranger than life.

Not her life, Phil was happy to say.

“What else do you call me?”

His finger stopped, and he laughed. It was melodious and carefree, and Phil marveled, because she knew he could be ruthless.

“You don’t really? It sounds like a character from a dime novel.”

“Well, what do you expect, with you coming and going through windows, appearing and disappearing in the fog, handing out pistols like cocktails.”

“Hmm. I like it.” And that put an end to further conversation.

Phil herself remains a charming lead. She’s a little scandalous, very irrepressible, and definitely outspoken and determined, but she’s also deeply feeling towards her friends and servants (more chosen family than employees at this point). And she has a finely honed empathy for other women, particularly those in plights familiar to her: those married to cads and abusers, those looked down upon by society for their behavior or circumstances.

Noble has a knack for populating her stories with colorful characters. Even the background faces that appear for a handful of sentences are memorable. She’s stocked Resolution with plenty of familiar archetypes—the passionate lady reporter determined to prove her worth to the Boys Club; the gorgeous and outrageous Southern belle; harsh titans of industry and starchy politicians; helpful and playful street urchins—but uses them deftly in a many-pronged mystery that has enough surprises to keep us guessing right up to the final reveal.

A Resolution at Midnight is a historical whodunit brimming with period detail; Noble has clearly done her research. And with its holiday trappings, its Gilded Age setting is vibrant and thoroughly cozy, even when the tension spikes and the stakes are raised. There’s a nice balance between thrills and nostalgic warmth here. This is a yarn that’ll appeal to a broad array of readers, fitting for fans of espionage, lady detectives, historical fiction, organized crime, and turn-of-the-century journalism, just to name a few.

Noble likes to end each of Phil’s adventures with the observation that the Countess of Dunbridge is always “more than happy to oblige.” And readers will walk away from A Resolution at Midnight hoping she’ll oblige us for many years to come.