August 24, 2022
Gwendolyn Kiste's Reluctant Immortals is gothic novel inspired by the untold stories of forgotten women in classic literature as they band together to combat the toxic men bent on destroying their lives, set against the backdrop of the Summer of Love. Here's Doreen Sheridan's review! 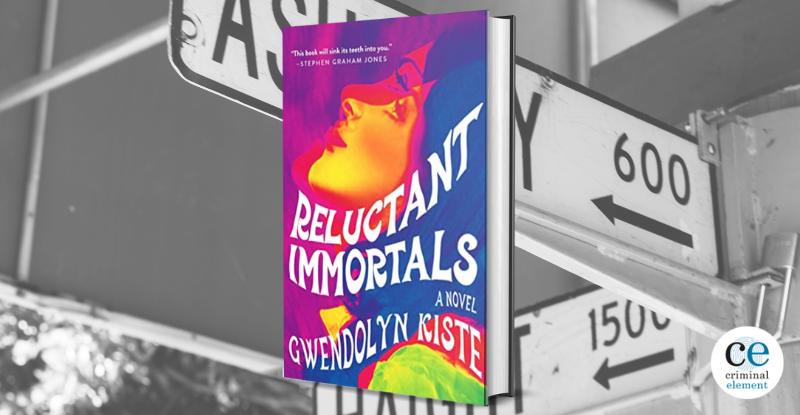 Lucy and Bee have been on the run for so long, and hope perhaps in vain that 1967 Los Angeles will finally provide the respite they’ve been looking for. Hidden away in the crumbling stone home they purchased with almost the last of their money, they spend their days in hiding and their nights at Munroe’s Drive-In, watching movies with the volume cranked up high in order to drown out the voices of the men who are still searching for them, decades after our heroines were reduced to mere afterthoughts in their own stories.

Munroe’s itself is a dying business, run by the cheerful Walter, who wants to introduce Lucy to the grandson who’s just getting home from the Vietnam War. Lucy has no interest in meeting young Michael but doesn’t know how to politely tell kind old Walter that without revealing the entire truth of herself:

His grandson’s been at war, an ugly war, even uglier than most. He’s seen more death in two years than I’ve seen in two lifetimes. He doesn’t need to meet me, too.

Walter doesn’t understand that. When he looks at me, he sees what everyone else does: a perfectly fine young lady, red curls in her hair, red rouge on her cheeks. Never mind the dirt beneath her fingernails and the teeth that sharpen if you catch her on a bad night. He never seems to notice those things. Nobody does. That’s why I can hide in plain sight. Everything about me is a disguise.

For Lucy, pretty Lucy, was once known as Lucy Westenra, the beautiful young socialite who made the mistake of believing that a certain Transylvanian count was little different from the other men who courted her and promised her everything. Now she’s a vampire herself, and the vigilant guardian of Dracula’s remains. Forced to flee England after the Blitz, she’s spent decades keeping his ashes from reconstituting themselves—thereby preventing him from terrorizing other innocent people—and has cynically watched as his story has grown increasingly romanticized with time and popular media.

Her closest friend and kindred spirit is Bee, another woman forced into immortality by the depravity of a man she thought she loved, and whom she thought loved her in return. Edward Rochester is not a vampire. His monstrosity is of an entirely different kind, one that collects young women and puts them on display, then locks them up when they fail to meet his standards. Bee, once known as Bertha, is finally free after burning down Thornfield Hall, even though Edward’s voice on the wind constantly taunts her, seeking her out and promising her they’ll meet again.

When disaster strikes, Lucy and Bee must flee Los Angeles and go in search of the last person they want to see, in order to stop even worse from happening. Their trek takes them to San Francisco at the height of the storied Summer Of Love, where they encounter other pilgrims just as vulnerable as they once were:

I glance in the rearview mirror. Daisy’s still back there, and that man’s standing closer to her now. I don’t want to think about what he might do to her, or what the next trucker who offers her a ride could try, the bargain he might force her to make in the dark. I don’t like to think about what I could do to her either.

It would be better for us to leave her here. Probably safer, too. She’s a stranger to us, dead weight, a nobody. But I was a nobody too, and I remember what it’s like for everyone to forget you, just because it’s easier that way.

As Lucy and Bee take on the demons from their past, they’ll have to wrangle too with their own complicated relationships with the women—past and present—who were both victimized by and continue to enable these men. Dracula and Rochester might have turned them into monsters, but our heroines cling firmly to the belief that biology is not destiny, and that they are not fated in turn to destroy others the way their makers do.

Reluctant Immortals is an engrossing thought experiment that reexamines classic literature through a 21st century lens. Gwedolyn Kiste has taken two of the most famously discarded victims in English literary history and has them fighting back against the men who abused them, while also allowing them space to uplift others. The novel is a timely metaphor for women refusing to stay quiet about the abuse they’ve undergone, and rising up to stop the men who did so much violence against them in the first place. It’s cathartic and thrilling to see Lucy Westenra and Bertha Rochester get an ending far more worthy of them than the fates they were once consigned to by their original authors.