July 1, 2021
A Black father. A white father. Two murdered sons. A quest for vengeance. Ike Randolph has been out of jail for fifteen years, with not so much as a speeding ticket in all that time. But a Black man with cops at the door knows to be afraid. Provocative and fast-paced, S. A. Cosby's Razorblade Tears is a story of bloody retribution, heartfelt change―and maybe even redemption. 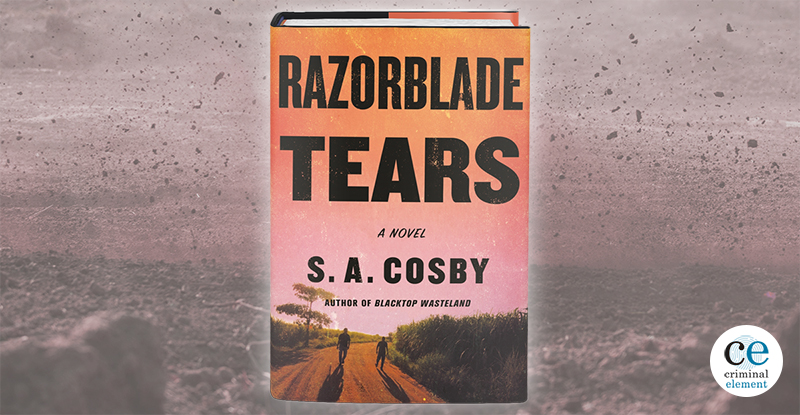 Razorblade Tears is the newest book by rising super-star S.A. Cosby. It comes out in hardcover on July 6th, 2021. It is selling for $27 from Flatiron books. The review-world is going crazy for the novel, as shown by the following praise:

“A powerful blend of pulsing action, sensitive and subtle character interaction, and uncompromising but highly nuanced reflection on racism and homophobia…Few novels marry tough and tender, head-banging and coming-of-age, as seamlessly as this one does, but that’s no surprise from a supremely talented writer who keeps getting better.”
―Booklist, starred review

“A lean, mean crime story…Fast on its feet, by turns lethal and tender…This is a bloody good yarn with two compelling antiheroes you’ll root for from the start.”
―Kirkus, starred review

As a reader and reviewer, I agree with these comments, this is a great book. The novel’s action is kicked off by the murder of Derek and Isiah, a married couple. These two are from a conservative area of Virginia and the men’s fathers do not support the union. These fathers―Ike and Buddy Lee―are rough men of an earlier time. They’ve both served time in jail and are comfortable with violence.

Since Ike’s time in prison, he has evolved as a person and created a successful small business. Ike, an African American, molded himself into a symbol for criminal justice reform. Buddy Lee, white, is not at all changed since his time in jail and remains a drunken petty criminal.

After Derek and Isiah are murdered, the police start looking into the crime, but the investigation quickly loses steam. Ike and Buddy Lee decide to take on the responsibility of bringing the criminals to justice.

Violence, evolution, and deep commentary on the unique aspects of father/son relationships, race relations, and same-sex marriage follow. I enjoyed the prose immensely, and the author’s command of dialogue is evident. For example, in this scene where the two fathers are discussing their past mistakes:

“Feels like we waited pretty late in the day to start learning shit.” Buddy Lee said. The bartender brought them two more shots. “Day ain’t over yet.” Ike said.

Cosby has a talent for fading into the background and allowing the characters to tell the story, shown here:

Buddy Lee gazed lovingly at the bottle of Jack Daniels sitting by itself like an exalted king on the glass shelf. “It is that. It’d make the Devil find religion,” he said. He got Tex’s attention and pantomimed taking a shot. Tex dropped off his shot without a word. Buddy Lee downed it in one gulp.

The book felt, to me, like a grittier and more serious Joe R. Landsdale/Hap & Leonard novel. The writing is superb, and the story is tight. There is a strong message on acceptance and personal evolution, but that message does not drown out the story―and storytelling is where Cosby excels. I think Razorblade Tears is going to be a hit this year, the novel deserves acclaim. I recommend buying this one.