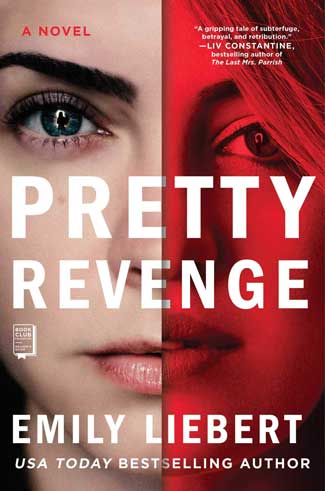 Pretty Revenge by Emily Liebert is a riveting, compulsively readable novel that explores just how far someone will go for vengeance.

When Kerrie O’Malley unexpectedly hears a voice from her past on the television, she abruptly moves her boring, unfulfilling life from Connecticut to New York City with one plan in mind: revenge. The woman on the program calls herself Jordana, but the face and voice belong to Jordan, a teenager Kerrie had admired as a child and the person who singlehandedly ruined Kerrie’s life. Her nana always said, “Senseless revenge would whip its head and snap you on the bottom,” but the chance to ruin Jordana’s seemingly perfect life is too great to pass up—and Kerrie’s more than willing to do whatever it takes to bring her down.

It takes a lot of guts to drop your entire life—even if it’s not much of one—and pack up and move to a city you’ve never been to for a job you might not get. It’s more than gutsy to become a different person in the sparkling city of Manhattan. All right, not all of Manhattan is “sparkling,” but it’s a lot better when you’re one of the wealthy. Kerrie, formerly jobless, arrives in New York and instantly begins transforming herself into Olivia Lewis, soon to be assistant to Jordana Pierson of Jordana Pierson Wedding Concierge, the most prolific wedding planner on the East Coast. Think The Devil Wears Prada, complete with makeover montage.

Opposite Kerrie, we have Jordana—formerly Jordan—who appears to have the perfect life: the massive, all-white Manhattan flat, the wealthy husband, and the headline-worthy wedding. But we all know things aren’t what they seem, and Jordana has a plan of her own; once the wedding is over and the funds are secured in her private account, she’ll ditch her philandering husband and strike out on her own. It’s everything the impoverished, abused girl of her childhood wanted: power.

And when Olivia Lewis walks into her office for an interview, Jordana doesn’t suspect a thing. After all, it’s been almost two decades since the night Kerrie’s life changed forever.

Pretty Revenge wasn’t exactly the book I expected. Touted as a thriller, I suspected more psychological suspense. In actuality, this book is straight-up revenge, with a voice similar to Gillian Flynn’s Gone Girl.

Not many people can isolate the singular moment in their life when things veered off course. When suddenly their existence—which may not have been perfect, but was at least reliable—swerved into oncoming traffic. My moment could have been the day my parents died. Or when I realized I’d never had a true friend.

In fact, I remember everything about that night—the way the streets were slick with milky fog. The way a steady breath of air whistled in my ears. The way the chill infested my body as I stopped in front of her house, with its sagging rain gutters and weedy lawn.

I knew the house well. I had a direct view of it from my second-floor bedroom window, where I’d lived for nearly all of my twelve years. I’d watched the splintered front door dangle from a pair of corroded hinges and sway in the slightest breeze. … I pitied the girl who lived there, with her silky red hair and tenacious blue eyes, but I’d also admired her. She was everything I wasn’t and everything I wished I could be. …I just wanted someone to see me for a change. [M]y actions that night changed our lives forever.

And not for the better.

Kerrie sets out on her mission to destroy Jordana against the backdrop of socialites and suspicious financiers, but Jordana has her own dark past to contend with. Beneath the glamor, Jordana is unhappily married with plans to leave her husband when the time is right. However, when the mother who hadn’t bothered to look for her starts calling, Jordana finds herself pulled back to her decrepit childhood home.

My only qualm with this novel, stylistically, was the tense. Told from both Kerrie’s and Jordana’s points of view, it seemed to shift between present second-person (the narrator speaking to the reader) and past tense. Also, there’s no way Kerrie found a spacious apartment in Manhattan with a working elevator at the drop of a hat without needing five roommates. But overall, Pretty Revenge is a quick-paced, well-written novel.