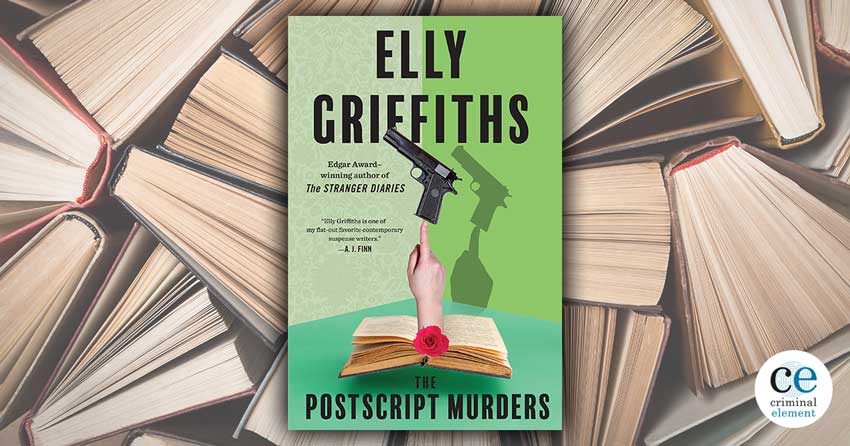 The Postscript Murders by Elly Griffiths is the second book in the Harbinder Kaur series, where murder leaps off the page when crime novelists begin to turn up dead and a killer must be caught before the body count rises.

Elly Griffiths’s second Harbinder Kaur Mystery is a perfect blend of police procedural and cozy wrapped up in a terrific fair-play package. The much put upon Detective Sergeant Harbinder Kaur of the Shoreham police is trying to balance her home life looking after the aging parents with which she lives and her police work, which has taken an unexpected turn. A Ukrainian-born carer named Natalka has come to the precinct claiming something suspicious about the death of one of her recent charges, a nonagenarian named Peggy Smith. Peggy’s death was deemed a heart attack, and while Harbinder doesn’t think there’s enough evidence to open an official investigation, she’s interested enough to attend Peggy’s funeral and gather more information. When a gunman interrupts Natalka while the latter is snooping around Peggy’s flat later, Harbinder becomes convinced that something villainous is indeed afoot.

Natalka, being unrestrained by Harbinder’s professional standards and ethics, is dead certain that someone killed Peggy and might be coming for her next. With the aid of two more of Peggy’s friends, elderly neighbor Edwin and former-monk-turned-cafe-owner Benedict, she hatches a series of plans to uncover the truth, culminating in a road trip to Aberdeen to interview several authors whose books Peggy had apparently acted as Murder Consultant for. But as the body count ticks upwards, Natalka begins to worry that her own secrets might have some bearing on what’s going on—and that her amateur sleuthing, despite Harbinder’s intervention, could lead her into trouble she has no way of escaping.

I thoroughly enjoyed spending time with this quirky, diverse cast of characters as they took their individual approaches to mystery-solving, resulting in an extremely satisfying ending where all plot threads were neatly tied up. Clues were seeded so carefully through the proceedings that I was absolutely chagrined that I hadn’t come up with the solution before our intrepid investigators did. I blame it partly on being so charmed by grumpy Harbinder, headstrong Natalka, awkward Benedict, and perhaps most of all by Edwin, who uses this adventure to keep at bay his fears of decrepitude.

That’s how I know I’m old, he thinks. Because sometimes it does take him by surprise. He sees a wizened old man in the mirror and wonders whether a geriatric burglar has broken in. His hands, with their veins and liver spots, appall him. He thought that his voice was still the same but, the other day, in the chemist, he heard a querulous bleat asking for Gaviscon tablets. Could that really be Edwin Fitzgerald, who was once described by the Radio Times as ‘mellifluous’? Get a grip, Edwin, he tells himself. You’re on a road trip with two young friends. You’re spending the night in a B&B and then you’re going to Scotland, one of your favourite places on earth. What’s more, you’re on the track of a dangerous criminal. You’re a detective, almost a crime fighter.

The Postscript Murders often feels like a classic whodunnit, referencing World War II spies and Golden Age mystery novels as the investigation winds on. But it’s also keenly cognizant of contemporary issues, whether it be sardonic insights into the world of modern publishing, the shadowy frontier of cryptocurrency, or more personally, to our lead protagonist, Harbinder’s identity as a gay Sikh woman with perhaps limited career mobility. She’s often only too aware of things that her white, straight counterparts hardly even notice, and while that’s sometimes beneficial in her line of work, it can also feel discouraging, as here where she and her partner, Neil, are driving out of town to interview a person of interest:

‘Probably full of racists and fascists,’ says Harbinder, who is trying to track their progress on her phone.

‘Why would you say that?’ asks Neil. ‘I’d love to live somewhere like this. It’s like a Christmas card.’

‘Exactly,’ mutters Harbinder. She’s being unfair, she knows. Neil isn’t a bad sort, it’s just he’s in thrall to a certain idea of Englishness, one that still isn’t available to people whose skin isn’t as white as Bing Crosby’s Christmas.

The Postscript Murders is a terrific modern police procedural-cozy hybrid that had me rooting for our heroes through danger and heartbreak. I haven’t yet read the first in the series but am planning on remedying that soon, and I can’t wait to read the future adventures of Harbinder (and hopefully Co.)!