Book Review: Portrait of a Thief by Grace D. Li

April 4, 2022
Centuries ago, five priceless Chinese sculptures were looted from Beijing—the spoils of war and colonialism. Now, determined to make his mark on history, Will Chen plans to steal them back. Don't miss Doreen Sheridan's review of Portrait of a Thief! 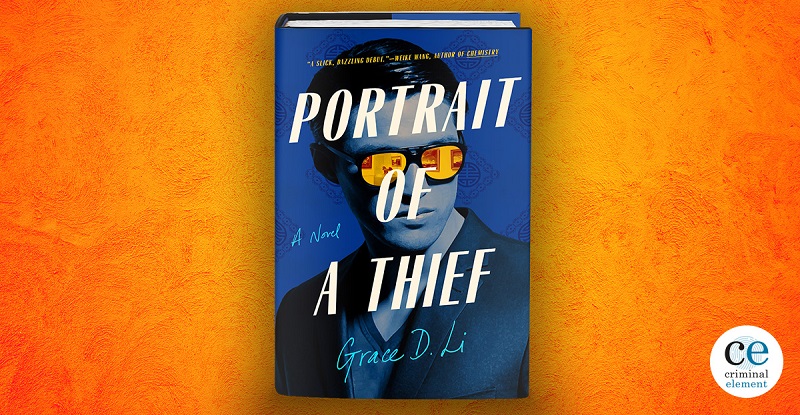 I picked up Grace D. Li’s Portrait of a Thief expecting a fast-paced, exciting crime thriller with characters who felt close enough to me in the Asian American immigrant experience to be almost instinctively relatable. What I got instead was a slow burn look into the minds of five relatively privileged Chinese American college students—all around the age of twenty-one—as they grapple round and round with identity, belonging, and moral rectitude, especially as it pertains to cultural heritage.

Will Chen is a Harvard student working part-time at Boston’s Sackler Museum when he witnesses the audacious theft of almost two dozen pieces of Chinese art. One of the thieves slips a business card into his pocket as they’re making a getaway, leading Will, already dissatisfied with what he’s learned about imperialism as an art history major, to contemplate his own complicity in institutional theft hiding behind the mask of cultural education. Worse, the detective in charge of the case reveals subtle nativist tendencies while questioning him:

It might have been a small thing, to be called Chinese instead of Chinese American, to have this detective who spoke in a Boston accent look at him as if this place, this museum, this art didn’t belong to him, but—it didn’t feel like a small thing. Not when he was at Harvard, this place of dreams, and he was so close to everything he had ever wanted.

It was his senior year, and the whole world felt on the verge of cracking open.

“I’ve told you everything I know,” he said, “and I know my rights. Next time you want to accuse me of something, go through my lawyer.”

After this interaction, he almost impulsively calls the number on the business card. No one answers, but shortly afterward he receives a text containing a link to an Air China reservation under his name for five first-class tickets to Beijing. Knowing that this is an invitation for him to put together a crew, he recruits first his beautiful younger sister Irene, who always gets her way by dint of charm and poise. Next, he contacts a former romantic interest turned friend, software engineer Alex Huang, who’s happy to help him with favors in cyberspace.

Irene points him in the direction of her college roommate Lily Wu, whose penchant for illegal street racing speaks to her craving for thrills. Finally, the siblings recruit their childhood friend Daniel Liang, the son of the FBI’s foremost expert on Chinese art theft. Together, they fly to Beijing, where a monied young socialite offers them fifty million dollars for securing the return of the five fountainheads.

Each member of the crew has their own reasons for agreeing. Daniel nurtures an adolescent resentment towards his dad, born from their shared grief at losing Daniel’s mother. Lily is consumed by a burning, if unformed, desire for escape, while Alex craves a different life from the one expected of her, though like Lily she isn’t quite sure what kind. Will has romantic ideas of China and his own place in history. And complicated, perpetually right Irene has, perhaps, the most burdensome role of all, to keep her impractical older brother out of trouble:

Even though she knew how much he loved art, a part of her had always been waiting for him to realize that his responsibilities were worth more than his dreams. He was the eldest, after all. But if he would not do it—if he would not think of the expectations placed on him from their parents, their grandparents, all those in China who saw them as the American Dream—Irene would. She would do what he wouldn’t, and while she was at it, she would make sure she did it better.

She could not afford to.

As these five young people cross continents and plan their heists, they unexpectedly build deeper relationships and run up against greater obstacles than they’d ever anticipated. Will they manage to carry out the steals of the century? Or will their names go down in history as cautionary tales against theft, no matter how noble the reasoning?

Ms. Li aims for elegance in her depiction of the psychology of crime and the morality of contemporary art curation. It’s clear that the interior struggles of these five representatives of the Chinese diaspora, whether first- or third-generation American, are more important than the actual thefts themselves, which are carried out about as well as you’d expect by a bunch of young amateurs whose idea of studying crime involves repeatedly watching movies like Ocean’s Eleven and The Fast and the Furious. The plot twist at the end has interesting things to say about colonialism and theft, even if the book overall doesn’t hang together as well as the author likely envisioned it. Perhaps the Netflix series currently in the works will sharpen the material. I’m definitely here for continuing nuanced representation of the multitudes that form the Asian American experience.