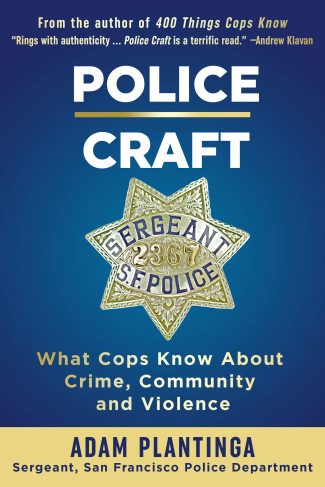 Police Craft by Adam Plantinga explores the inner-workings of police work, from police shootings, racial profiling, community relations, and every other aspect of policing.

Adam Plantinga, a police officer of seventeen years and current Sergeant with the San Francisco PD, achieved distinction in a new realm with the publication of 400 Things Cops Know in 2014—a non-fiction title that the Wall Street Journal dubbed “The new bible for crime writers” and won rave reviews from  the likes of Lee Child. Plantinga holds a B.A. in English from Marquette University in addition to having majored in Criminology/Law Studies and honed his writing chops while authoring a series of articles on police work for the literary magazine The Cresset. Now, he returns with his second full-length effort, Police Craft: What Cops Know About Crime, Community and Violence.

Police Craft is designed to give readers an intimate look at law enforcement through the eyes of a working cop. A companion piece to Plantinga’s previous book, which utilized a bullet point format, it is presented in 21 distinct chapters that address specific elements of the job (as well as the sociology of crime), from entering the training academy straight through becoming one of the “OGs” (Old Guys). Further, the author dedicates a final chapter, “Moving Forward,” to suggestions for reform before addressing the public’s most frequently asked questions in an afterword that touches on everything from police culture to pop culture, and the inevitable intersection between the two; this point is buttressed by memorable film and television quotes that punctuate the narrative.

Plantinga’s tone is conversational rather than academic, and he uses humor to great effect throughout the book (often at the expense of firefighters, who the police have a running-yet-respectful rivalry with). This underscores the notion that gallows humor is a necessity in combatting the grimmer aspects of the job. But, despite his loyalty to the badge, Plantinga doesn’t shy away from controversial issues, or the public’s perception of a systematic crisis (which he concedes is indicative of a problem in and of itself). From the introduction:

I don’t think most people know what cops do all day. Or what the job looks like. Or what it feels like.  This book is about those kinds of things. And in presenting police work the way it actually is, my hope is that the reader will understand and recognize the contributions of the men and women in law enforcement. Because it’s a noble calling, if done right. It isn’t always done right. I know this because I watch the news and read the papers. I know this because I don’t always get it right. But I’m not doing anyone a favor by serving up a sanitized view of how the job works. Life isn’t always tidy. And law enforcement is one of the untidiest professions around.

Plantinga’s focus is on stories rather than statistics (though there are some numbers peppered throughout), and he shares personal anecdotes—embarrassing moments (putting his head through a wall in pursuit of a suspect, hitting his supervisor’s vehicle) and triumphs among them—in addition to examples from within the departments he’s worked as well as incidents of national recognition. A few of his more intimate revelations include the following: that an academy classmate once referenced wanting to shoot himself to Plantinga, apparently jokingly, before actually committing suicide, that vivid recollections of death scenes sometimes plague him, and that he struggles to balance the demands of work with making time for his wife and children. These points, though not belabored upon, humanize Plantinga while also illustrating the emotional baggage that often equals, or even supersedes, the physical demands of the job.

Admirably, Plantinga recognizes his own limits and consequently called upon colleagues to bolster his knowledge of certain areas—such as Special Operations (including critical incidents, dog handling, explosive devices, etc.)—rather than limiting the book to his own expertise. Still, these segments maintain momentum rather than getting bogged down in minutiae. Also noteworthy is the author’s discussion of hot-button topics such as police shootings, racial profiling, and the use of excessive force, which have been a source of escalating tensions between cops and communities in recent years; Plantinga explores both the perceptions and the realities of such occurrences, and argues that each side needs to have a better understanding of the other for progress to be made.

Overall, Police Craft is a fine choice for crime writers who want to capture authentic action and emotion in their own works as well as laypersons who simply desire a better understanding of law enforcement. Adam Plantinga is a formidable storyteller, and his candid, colorful approach renders this book both compulsively readable and highly informative.