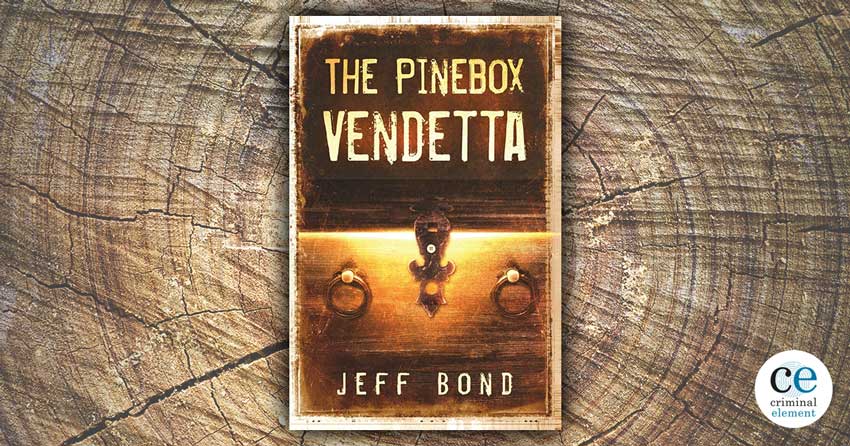 The Pinebox Vendetta by Jeff Bond is a genre-bending thriller that combines a love story, a cold-case murder mystery, and a political blood feud—told over the course of a single breathless weekend.

Twenty-year college reunions are a big deal. Who made it to the top of Disraeli’s “greasy pole”? How many made-in-college romances are still intact? How are the superstars—president of the class, the one everyone wanted to date, the brainiacs, and the sports legends—faring? If your alma mater is Yale, and you’re a legacy (i.e., with Pruitt or Gallagher as your last name), you’ll be compared to your forebearers.

The Gallaghers and Pruitts have dominated the American political landscape dating back to Revolutionary times. The Yale University class of 1996 had one of each, and as the twenty-year reunion approaches, the families are on a collision course.

Welcome to Jeff Bond’s The Pinebox Vendetta, where Yale’s Class of 1996 returns to New Haven. The pace is rat-a-tat-tat: a ransom on a pirate ship; a woman sleepwalking through the detritus of an unsatisfactory marriage, hoping for a career-changing reunion; and an enraged-bull of a man, returning to the place where everything went pear-shaped.

Part I: Jamie Gallagher, 10 years post-Yale, is in Africa, orchestrating a $10-million ransom. A beret-wearing general holds the keys to the procedure. Everyone is on edge.

The day was already scorching, the sky’s blue brilliance broken only by the boiling disk of the sun. The general’s yacht rocked softly in the west, appearing quite large now, its bow sleek and spear-like.

Bond shows how deep Jamie goes to be successful—a money exchange is not enough. He sets up a perilous double-cross because he’s a Gallagher and high-wire maneuvering is in his DNA.

Jamie had placed himself between dangerous people, but dangerous people performed the same calculations benign ones did. The pirates would keep up their end so long as the benefits remained clear: not only cash, but stronger ties with the general and the establishment of a new back-channel to the powerful Gallaghers.

Jamie prepared for his encounter with the general for almost a year and a half. While the pirates count the money, Jamie offers him a bottle of Akpeteshie, the national spirit of Ghana. Jamie’s sister Charlotte owns the “local distillery that produced Akpeteshie,” and “she had allowed Jamie to follow this lone bottle through the factory.”

At the final step, just before corking, he’d poured out 150 millimeters of liquor and replaced it with an equal amount of king cobra venom.

For fifteen months, Jamie had been inoculating himself with increasingly larger doses of venom.

What could go wrong when the general opts for tumblers of Akpeteshie rather than shot glasses?

Ten years later: Samantha “Sam” Lessing has high expectations for her Yale reunion. Her professional life is OK, but her personal life is not. She and her husband, Abe, have conversations that smack of George and Martha Woolf.

He nodded to a pair of shiny heels in Sam’s duffel.

“I haven’t seen these people in twenty years,” she said. “I’m erring on the side of adequate.”

Her husband snorted, seeming to take the comment personally. Twelve years older than Sam, he’d been an already-aging rocker when she had met him in her late twenties.

Sam is realistic. She’s a working mother, navigating NYC life without the safety valve of a family trust fund—the 20 years since Yale is almost an uncrossable gap.

Once you’ve changed diapers or dealt with a rotten boss, you can’t go back to debating abstract versus figurative art. Not with a straight face.

Still, she wondered if some core magic might remain. New ventures hatching over hors d’oeuvres.

Alongside Sam’s shiny heels is “a portable audio recorder she’ll use for a public radio-style documentary on the Pruitt-Gallagher rivalry—widely known as the pinebox vendetta.” Sam sees her documentary as a get out of jail free card; OK, nothing’s free, but it has the potential to reset her career. Her biggest difficulty in interviewing her classmates are the varying interpretations: are they modern-day Hatfield-McCoys? How did the rivalry start?

Some claimed it traced back to an ancient double-cross involving the Declaration of Independence. Others said a dagger bearing the Pruitt crest had killed an important Gallagher heir.

When Rock Pruitt arrives, he buys a sledgehammer at an Orange Street hardware store. The course of Rock’s life was forever dimmed when his college roommate died in dubious circumstances. Rock never tires of upsetting the apple cart. For his reunion grand gesture, he decides to destroy a stained glass window given to Yale by the Gallagher family centuries earlier. Rock is high from the minute he steps out of his Maserati, floating on rivers of booze and lines of cocaine; his obsession colors all his experiences and encounters. He has it in for “liberals” and “their book altar.”

The sledgehammer was waiting in the center of the room. He hoisted it. In his alcohol-light hands, the thing felt wild and dangerous and like a tool of justice.

The doors of the Sterling Library—Yale’s Collegiate, Gothic-styled cathedral to learning—are about to close. Rock takes the elevator to floor 23, throbbing with anticipation. Rock is desperate to destroy Sterling’s magnificent stained glass windows. But he brought a knife to a gunfight—access to the windows via the balcony is blocked, and the sledgehammer is useless.

What is this feud? Could a pinebox be just a pinebox? Here are clues: “English speakers borrowed vendetta, spelling and all, from Italian, in which it means ‘revenge.’ It ultimately traces to the Latin verb vindicare, which means ‘to lay claim to’ or ‘to avenge.’” Sounds about right: overarching themes of avenging wrongs, competition, revenge, and political rivalry are the mainstays of the Pruitt-Gallagher saga. The Pinebox Vendetta is a chilling, provocative debut to a new series.