July 7, 2021
Samira Sedira's People Like Them ​is a prizewinning psychological suspense novel inspired by a true story about a couple in an insular French village, whose lives are upended when a family of outsiders moves in. 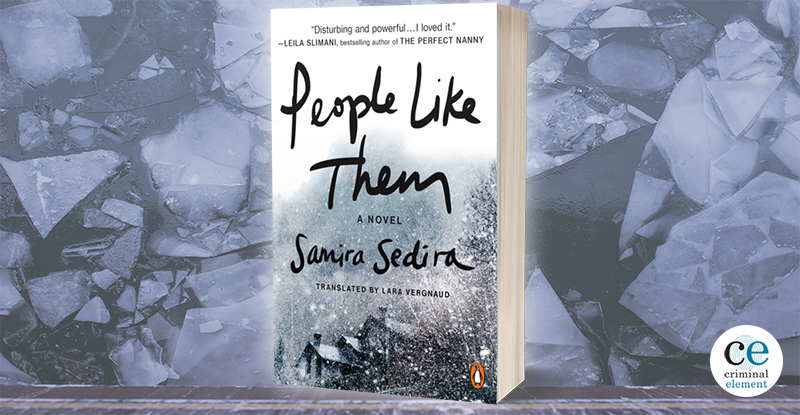 As Covid related restrictions loosen up, many tourists are going to head for France, and for good reasons, as it’s a wonderful place to visit for a few days or a few weeks, with great landscape, delicious food, and tasty wine. However, daily life for a lot of French people is far from the rosy glimpses caught by the average tourist. Several recent novels, like Summer of Reckoning, by Marion Brunet,  have even shown how dark it can get.

This is definitely the case with People Like Them, as Samira Sedira bases her story on a tragedy that happened in 2003, with a quintuple murder.

From the very first pages, you feel how dreadful life is in Carmac, a tiny mountain village. The weather itself doesn’t help, it’s either too hot or too cold to bear. No escape possible:

I once was young and now I am old. In its great simplicity, this sentence says everything about us. Live, and then die. Rot.

Chapter 2 recapitulates the horrible murder, when Guillot killed Mr. and Mrs. Langlois and their three children.

Then most of the chapters alternate between the trial and the background, how Constant Guillot, the killer, and his wife Anna (the main narrator) met, and their life in the village before the terrible event.

The style has a great flow, very well conveyed in translation, as the narrator addresses her husband while reminiscing.

Several times throughout the book, we are told about the difficult social background, especially the terrorist attacks in Paris in 2015.

That year, a rich black family, the Langlois, built a very expensive mansion close to the Guillots. They became friends for a while, even feeling compassion for their mutual difficulties in life. Bakary Langlois, from Gabon, was indeed given up for adoption.

But Constant saw all his hopes of a high-level athletic career vanish in an accident during training. And little by little, his built-up anger resurfaces, especially as he feels cheated by Langlois, and we see the dark sides of his character emerge: his “fanatical determination”, his “unwavering obstinacy… as though nothing could distract [him] from [his] objective” (page 50), his obsessions, his tendency to become “an unpredictable volcano”.

The author, who focuses on class relations, did a fantastic job at capturing the French social background, and at conveying the local color of life in a small village. The fourth chapter focusing on Abbott and Costello, the two old pillars of the cafe, is a gem, so spot on. It will sound very familiar to anyone living in a tiny place in France.

Did you notice that their socks went up to their knees? All you could see was their this!

Socks, in this weather!

Once I caught two of ’em copulating behind a bed of geraniums, asses bright red, I swear. What a gas!

Well, those are the Germans for you, or the Dutch, and maybe the Belgians, too.

Can you imagine? They walk all day long in the blistering heat –that’s what they save up for.

And at night, they don’t even sleep in a hotel, right? They prefer a tent…

No accounting for tastes…

Sedira even highlighted some aspects that were apparently mostly ignored during the trial of the real event. The victims were indeed a Black family, but it seems that the motive of racism was never really taken into consideration. The author didn’t omit that aspect.

Actually, Constant’s jealousy is fueled by his racism: why would the Black man Bakary succeed, and not he, Constant, a White man born and raised in France?

The book does have some glimpses of positivity and hope, in the character of Anna. The very last chapter was a lesson in warmth and kindness.

I’ll tell her See you next time, too, with the same warmth in my voice, the same kindness in my eyes, the same trembling humanity.

The reader will better measure the weight of this sentence when they discover the context.

Ultimately, Sedira is offering a study on human nature. She is very careful at showing that the violence of individuals is rarely happening in a void: so many factors enter into play, what they have personally been through in their childhood, what the country has been experiencing socially (even the weather can have its impact), and people around them. Could Guillot’s friends and relatives have seen it coming, could they have avoided the tragedy?

When normal people we know commit such terrible crimes, are we totally innocent ourselves?