Book Review: Penny for Your Secrets by Anna Lee Huber 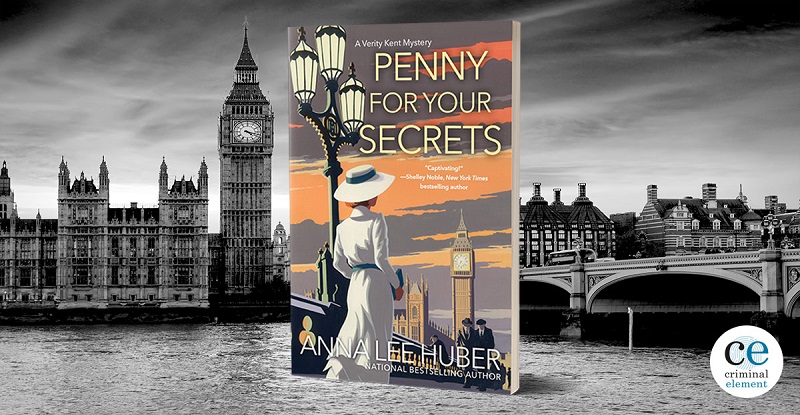 Penny for Your Secrets by Anna Lee Huber is the third book in the Verity Kent series based in post-WWI England.

In the Fall of 1919, former intelligence agent Verity Kent is dismayed to see her friend Ada openly clashing with her lordly husband, Rockham, at a dinner party. Dismay quickly turns to shock when Ada jokingly threatens his life at the dinner table.

As the bowls of soup were whisked away by liveried footmen to be replaced by plates of delicate sole in lemon cream sauce, Ada wriggled in her chair, reaching down to extract something that had either been tucked behind her seat cushion or attached to her person. When she plunked it down on the table next to her plate, I began to suspect it was the latter, for she could never have concealed something so hefty beneath her sinuous dress. Seated to her right, Lord Paget startled, confirming my suspicion of what the object was.

“My lady, what are you going to do with that?” he asked warily, struggling to retain his composure at the sight of a revolver on the table.

Ada shrugged. “Oh, I don’t know. I might just shoot Rockham.” The words were droll, but the glint in her eyes when she glanced toward her husband at the opposite end of the table was pure malice.

A stunned silence fell over those at the table near enough to hear Ada’s words… Fortunately, Crispin’s wit did not desert him.

“Well, not before I’ve finished this scrumptious sole, I beg. For I suppose I should be obliged to set my fork aside if you choose to put a bullet through our host.”

Ada swears that’s all it was: a joke. That she found the revolver on her seat and made a tasteless quip.

But when Rockham is found dead that night, shot by the same revolver, the murderer seems obvious. A desperate Ada begs Verity and her war-hero husband Sidney to open an investigation and clear her name.

The Rockham inquiry has barely begun when Verity’s friend Irene Shaw, another ex-intelligence agent, appears. Irene’s half-sister Esther was killed several days ago in what the police have labeled a home invasion gone wrong. But given Esther’s war-time work censoring soldiers’ letters, Irene is sure she was deliberately murdered.

When Verity digs deeper and finds that Esther’s death may actually be connected to Rockham’s, the Kents realize they have discovered a criminal conspiracy that goes far beyond two murders. A conspiracy that implicates extremely powerful men in the British government, and links back to the unsolved disappearance of the crew of the ship Zebrina…

As always, it’s nearly impossible to predict what will happen next; Huber is sparing with her red herrings, but she’s an expert at smokescreens, and when her characters do the unexpected, she never stretches past the boundaries of belief.

Verity and Sidney’s marriage is on firmer ground now, but Sidney is still (realistically) struggling with the survivor’s guilt of a good soldier, adding plenty of romantic and personal drama to the overarching intrigue.

Meanwhile, Verity is finding that even though she’s officially left the intelligence department, she can’t stay away from that life completely. And that she still has powerful enemies in the government, like the odious and misogynistic Major Davis:

“He’s had your name added to the list of women suspected of having intimate relations with the enemy.”

“He suggested it was impossible to believe that you hadn’t resorted to such… tactics in order to gather the information you did while you were in Belgium. That you should at least be added to the list as a precaution.”

I couldn’t help but feel attacked and vilified, merely for doing my bit. No one had forced me to work at the Secret Service. I could have remained at home, assisting periodically at the canteens and knitting socks, even if the prospect of such a life now made me cringe. Instead, I’d stepped up, I’d given it my all, and I’d willingly placed myself in danger time and again. And yet, once the war had ended, all I’d received in return was a curt, “Thank you, but your services are no longer needed,” and my name added to a list that might as well have been labeled, “women we believe are disloyal whores.”

Huber’s historical mysteries are always multilayered, complex stories, and Penny is an especially satisfying one as she interweaves social commentary and righteous feminist rage into the post-War period.

Many tell Verity to leave Sidney to his grief and pain rather than dig it up, but that stiff-upper-lip attitude only led to droves of suicide and a generation of traumatized soldiers who became hard and bitter. Verity is far too aware of how badly society is treating the strong, intelligent women who stepped up while the men were away; how constricting and disrespectful it is to expect them to subside quietly to traditional roles and let go of their freedom and power without complaint now the war is over.

It’s this solid depth that makes Huber’s novels so powerful and interesting, well worth multiple reads. Their firm grounding in the real world means the colorful characters are substantial and authentic.

Each installment in the Verity Kent series has vibrated with tension; Penny, though not quite as action-packed as the previous two mysteries, still has plenty to unease the reader. While the Kents have survived traitors and madmen bombers, their newest threat may be the most dangerous of all. In Lord Ardmore, Verity has met her own Moriarty: a high-placed, wealthy politician with eyes and ears everywhere, a criminal mastermind adept at manipulation and covering his tracks, whose reach is vast and frightening. From here on out, things are sure to get very, very interesting…

The moment I read Huber’s first novel in her Lady Darby series, The Anatomist’s Wife, I knew I’d discovered an author worth following. The Verity Kent series proves she can bring both the 1920s and 1830s back to life with panache. With a perfect blend of murder, mystery, history, romance, and powerful heroines, Huber has yet to disappoint. If you’re a fan of historical fiction and you haven’t put her on your permanent pre-order list, you’ve made a grave mistake that should be remedied immediately.